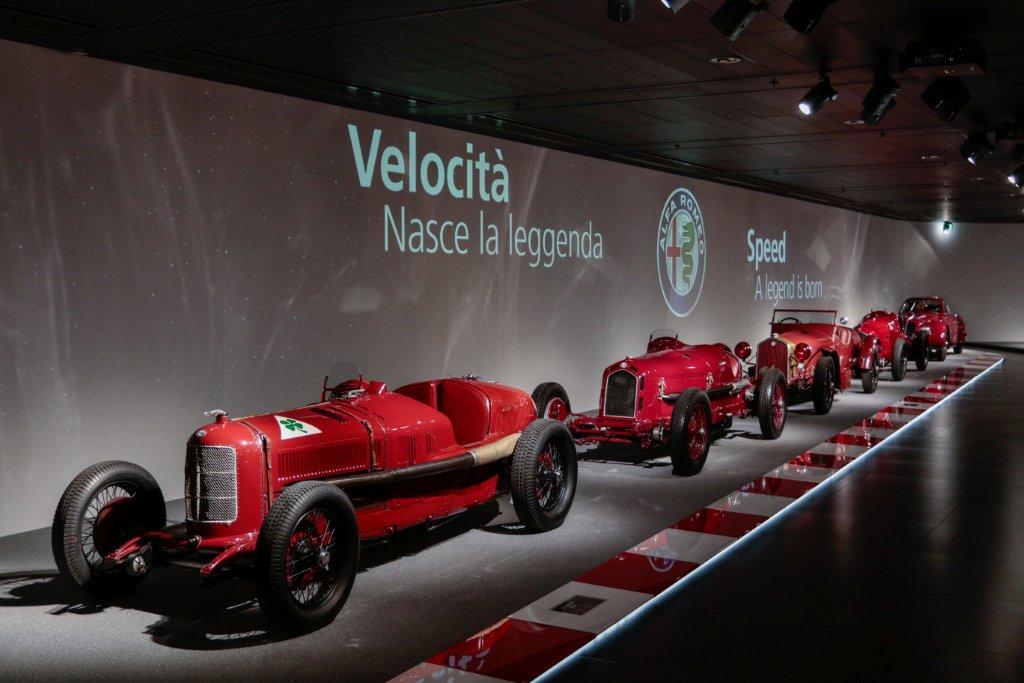 Brian Joss – To commemorate a milestone that very few automakers can match, Alfa Romeo celebrates its 110th anniversary, reopening the doors to its historic museum in Arese, Italy, while following all current health and safety guidelines.

The brand invites fans from around the world to see new sections of the museum, enjoy exclusive video content, and join the festivities online.

The Alfa Romeo Museum, the hub of the celebrations : Located in Arese, on the outskirts of Milan, the Alfa Romeo Museum houses over 200 historic cars, making it the natural venue to celebrate the brand’s 110th anniversary. As a special gift to all the “Alfisti” fans around the world, Alfa Romeo will open the museum’s previously private collection storage areas to the public, inviting visitors to enjoy an additional 150 cars, plus trophies, artwork, and engines for road, air and marine mobility. The collection is divided into 18 themed zones, ranging from the brand’s earliest cars, such as the 20/30 ES, to Formula racers, with Formula 1 and Formula Indy models among them.

Other  highlights of the collection include Concept cars, such as the Caimano and Protéo; Pptotypes, such as the Scrabble and Sprint 6C; and historic sports model RLs, Vittorio Jano’s 6Cs, and more recent racing and road cars.

Last but not least, the collection houses notable powertrains, including the 4C 1500 from the 1930s and the Formula 1 Turbo 415Ts.

A story linked to a nation: a part of the celebrations, the new “Alfa Romeo in Uniform” section dedicated to the cars of the Carabinieri will be unveiled, as a testament to the historic relationship between Alfa Romeo and the police force, which has long enlisted the help of the Biscione’s most significant models. The area has been prepared with a dynamic layout, geometric graphics and symbolic colors enhancing the six highly selected Alfa Romeo models on show, representing 60 years of a historic relationship with the Carabinieri. The cars, arranged on large circular platforms, form an evocative 3D effect that simulates halos of theatrical light aimed at cars that have served the Carabinieri in all kinds of adventure all over Italy.

On the walls, the graphics are brightly colored: the red, symbol of Alfa Romeo, and the blue of the emergency siren lights, highlight the historical images of cars, characters and events that characterized the relationship between the Carabinieri and Alfa Romeo.

From the 1900 M “Matta” that won the Carabinieri a Mille Miglia, to the legendary Giulia, the most iconic of the “Gazzella” models. All the way to the 75, with an armored car on display, the Alfetta Alfa 90 and a rare Giulia Giardinetta. The new “Alfa in Uniform” section of the Museum evokes the cars, the trims and the eras that have marked the history of Italy. It was designed by the architect Benedetto Camerana, who previously conceived, at the end of 2013, the redevelopment and renewal of the entire museum.

A historical acronym for the future: GTA: The new limited-edition Giulia GTA, conceived for the brand’s 110th anniversary, makes its first public debut in Arese. From a technical and philosophical perspective, the new Giulia GTA is inspired by the Giulia GTA of 1965. Developed by Alfa Romeo’s racing arm Autodelta, the 1965 “Gran Turismo Alleggerita” (GTA) was based on the Giulia Sprint GT that racked up sporting successes worldwide.

The new Giulia GTA is based on the Giulia Quadrifoglio and is fitted with a more powerful version of the 2.9 V-6 bi-turbo engine with 540 hp. With its extensive use of ultra-light materials, it benefits from a weight reduction of 100 kg, achieving a best-in-class weight/power ratio of 2.82 kg/hp.

Additionally, specific technical solutions have been developed for other aspects, namely aerodynamics, alignment and handling.

A Tour of 110 Years:  The brand is offering a virtual tour of the museum through a series of videos produced to commemorate this remarkable event.

Titled “A Tour of 110 Years,” the video series includes:

Passionate participation:  Alfa Romeo is inviting all fans, from diehard “Alfisti” to casual enthusiasts, to join the festivities at the museum via the brand’s official social media channels at 3:30 pm CET at this link. For those able to visit the museum in Arese in person, Alfa Romeo has arranged involvement of clubs, visitors and enthusiasts, inviting fans to participate in several activities, including parades on the museum’s track. All activities will be conducted following current sanitisation and safety guidelines.

Farina and Fangio to Räikkönen and Giovinazzi: Alfa Romeo won the very first Grand Prix race and the inaugural edition of the Formula 1 Championship in 1950, with Nino Farina on board an Alfa Romeo Gran Premio Tipo 158 Alfetta.

That triumph was repeated in 1951 by Juan Manuel Fangio in the Alfetta 159.

Three exceptional travel companions join Alfa Romeo: Swiss luxury watch company Eberhard & Co. is strengthening its bond with Alfa Romeo by creating a new limited-edition chronograph to pay tribute to the 110th anniversary. A unique timepiece, the chronograph is designed to encompass all the technical and styling content long seen in Eberhard & Co. products, with the same sporty and glamorous appeal as Alfa Romeo’s models.

Italian bicycle manufacturer Compagnia Ducale’s contribution is the Alfa Romeo 110th Anniversary e-MTB, an electric mountain bike that combines strength and sportiness with the comfort of assisted pedaling. Its athletic feel is reflected in the tech specs – a powerful yet quiet 500-watt battery, fully integrated into the frame – and in the striking livery created jointly with the Alfa Romeo Centro Stile, the brand’s in-house design and construction office.

Audes Group is the official licensee for Alfa Romeo apparel, a partnership that begins with a collection to celebrate the brand’s 110th birthday. AUDES Group – the official clothing licensee – designs, produces and distributes its Alfa Romeo-branded collection worldwide.