With a 20,9% decline compared to the same month a year ago, the volume of goods transported and stored in the country dropped by over one-fifth during May 2020.

However, the biggest volume drops shifted away from local land-based transport to international transport, and both SA’s rail freight and road freight volumes showed signs of recovery. 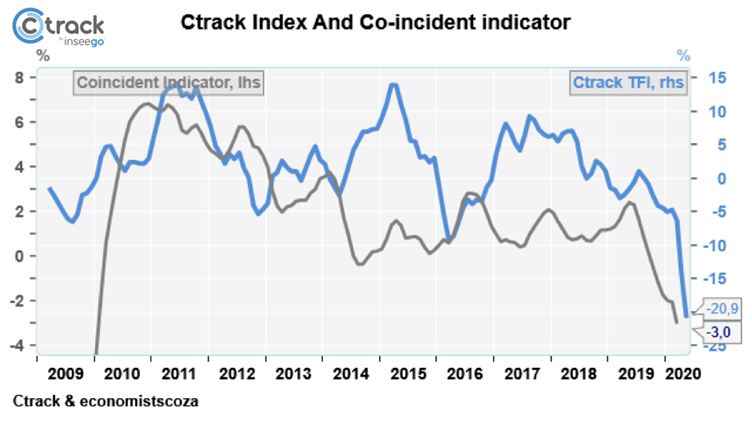 In fact, both road and rail freight as well as storage volumes increased compared to April’s levels. The recovery in these sectors was realised as the country shifted from level 5 to level 4 lockdown restriction.

The local transport sector has probably seen the worst, while international trade remains in the midst of the Coronavirus crisis.

The air freight sector needs to open up as soon as possible. It is clear that many air freight companies and freight forwarders in the sector will not survive, while important exports such as flowers, table grapes and even Harrismith’s apples continue at snail’s pace.

The air transport sector – both passenger and freight – may not return to pre-Covid-19 levels for three years.

IATA estimates the sector will make losses of $84,3 billion this year having already lost $419 billion in revenue. Between January and July, 7,5 million scheduled flights were cancelled worldwide. Non-scheduled air freight is down over 80% in some countries.

In a normal year, air freight transports over 52 million metric tons of cargo – about 35% of all global trade by value. In SA, some respite is expected by the end of July as international flights ramp up. But clearly, air freight is the hardest hit sector in transport.

“While air freight volumes remain a major concern, we can see there is some light at the end of what has been a very dark tunnel,” comments Hein Jordt, managing director of Ctrack South Africa.

“People around the world have shown tremendous courage and resourcefulness during this unprecedented global pandemic. We are encouraged and remain hopeful that the logistics industry, like many others, will eventually return to some level of normalcy sooner rather than later,” he concludes.