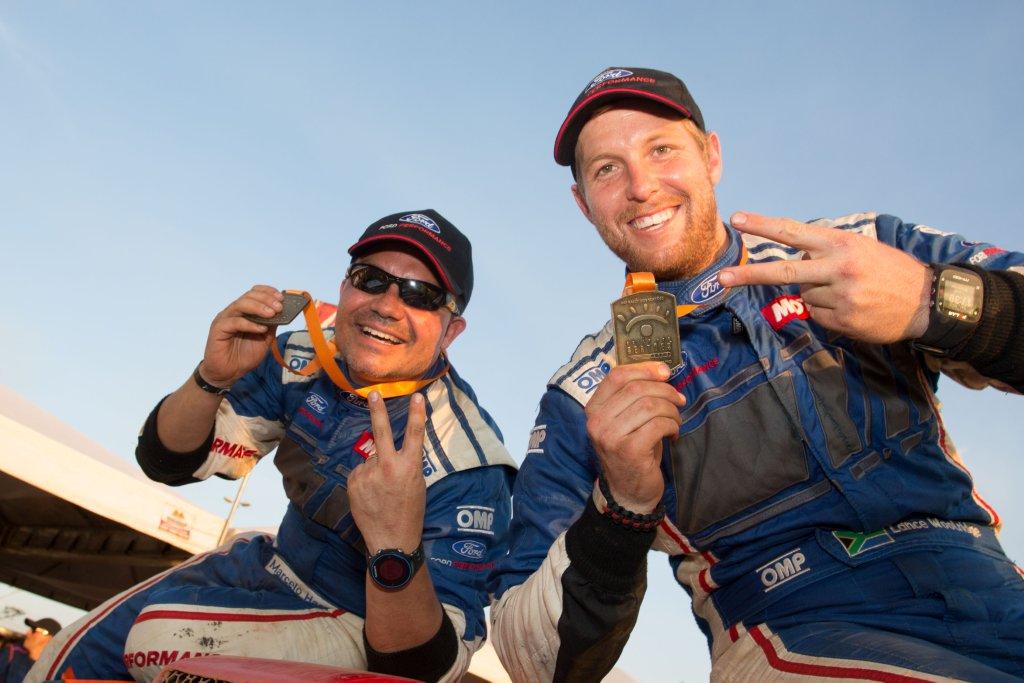 Brian Joss – A top-level career in motorsport is the dream for many youngsters who aspire to emulate their racing heroes.

Although few will ever have the opportunity to realise that dream, Youth Month is the perfect opportunity to profile two-time cross country racing champion Lance Woolridge who is doing just that as one of the stars of the South African Cross Country Series (SACCS).

At the age of 29, Lance already has an impressive 12 years of racing under his belt. His involvement in motorsport was virtually assured from the outset, having grown up watching and supporting his very own hero – his father Neil Woolridge who is a multiple cross country champion on two and four wheels, and competed in the Dakar Rally in 1998 and 1999.

Lance’s first competitive outing was in 2008 at the age of 16, driving a “Cricket” single-seater buggy powered by a 250cc engine in the KwaZulu-Natal regional championship. He moved up to a Class E Ford Ranger the following year, although as the only entry in the class he landed up competing against the heavyweight Class A vehicles.

Having completed his schooling at Maritzburg College in 2009 as one of the top 10 students, he was awarded a scholarship to study at the University of KwaZulu-Natal, graduating with a Bachelor of Commerce degree majoring in Economics and Marketing.

He has since become an integral part of the burgeoning Neil Woolridge Motorsport (NWM) business – a fully accredited Ford Performance centre, which is exclusively responsible for designing and manufacturing the Ford Ranger for cross country racing around the world. As NWM’s operations manager, Lance is responsible for managing the building of new race cars, maintaining stock levels of parts and spares from suppliers around the world, customer relations locally and internationally, plus the maintenance of the team’s South African championship vehicles.

But it’s the thrill of racing that gets him really inspired. “My goal has always been to win the South African cross country championship, and then to participate in the Dakar Rally, a goal that I will one day achieve,” he unequivocally states. “My ultimate aim is to win the Dakar Rally, which is the toughest event in the world and the pinnacle of the sport.”

There’s no denying that Woolridge has plenty of talent and an equal abundance of determination.

For his first year of national championship racing in 2010 at the age of 18, he and two mechanics rebuilt an old Ford Ranger during the off-season to compete in the Class E category for nearstandard vehicles. Success soon followed as he became the youngest person to win a Class E race in South Africa, and youngest driver to win his class and finish the tough 1 000km Botswana Desert Race.

Although he suffered a back injury with a fractured and compressed vertebra during a crash and wasn’t able to complete the season, he still ended second in the championship with navigator Ward Huxtable taking the co-driver’s title that year. After spending three months in a back brace, Lance was back in action in 2011, moving up to the premier Super Production (SP) category and breaking another record as the youngest person to finish on the SP podium.

In the opening race of the 2012 season, he finished runner-up to team-mate Chris Visser in the locally developed diesel-powered Ford Ranger, making it the first-ever 1-2 finish for diesel vehicles in the top class of the SA championship. He finished sixth overall that year against the country’s top-ranked drivers.

The 2013 season saw the debut of the ground-breaking 5.0-litre V8-powered FIA T1-specification Ford Ranger, which was designed and built by NWM in conjunction with Ford’s performance vehicle division in the US to compete around the world. The young Woolridge was in the limelight again, as he dominated the season-opening Magalies 400 with an impressive overall victory for the allnew Ranger, making him the youngest overall winner at the age of 21. He finished fourth in the championship.

The following year saw the Ford-backed NWM team officially competing at the Dakar Rally in Argentina and Chile, with Lance taking on the logistics role for the team, managing the truckloads of spare parts required for the two race vehicles. He further injured his back during the event, and elected to undergo surgery which saw him miss the season to fully recover.

He returned to the hot seat in 2015, scoring two podium finishes for the season. A promotion to operations manager at NWM in 2016 saw Lance give up his race seat to younger brother Gareth, giving him more time to focus on growing the outfit’s customer base around the world. This included expanding the partnership with X Rally Team in Brazil, which had dominated its domestic series with the NWM Ford Ranger since 2014.

After being part of the NWM service crew supporting the X Rally Team’s two Ford Rangers in Brazil’s arduous Rally dos Sertões over the previous two years, this event presented Lance with his first chance to compete on the international stage. The tough 2016 Rally dos Sertões covered

3 200km over seven days, and Lance did the team proud by earning a stage win and finishing second overall behind the X Rally Team’s experienced crew of Cristian Baumgart and Beco Andreotti in an identical vehicle – the first of a record-breaking four consecutive victories for the NWM-built Ford Ranger.

“The Rally dos Sertões was long, hot and rough, but I absolutely loved it,” Woolridge says. “It was a great result for me and a big boost for the NWM team as a whole. The fact that our vehicles dominated this race over the next three years as well is equally rewarding, especially as our involvement has significantly raised the level of competition in this region.”

It certainly seemed to give Lance new motivation on the home front too. With a focus on mental and physical fitness, Lance and long-time co-driver Ward Huxtable were embroiled in a seasonlong battle for the SACCS Class T title in 2017.

Although they narrowly missed out on the championship to rivals Johan and Werner Horn, they made it all their own in 2018 and were crowned Class T champions in the V8-powered NWM Ford Ranger.

And their momentum didn’t stop there, as the Woolridge/Huxtable combination proved almost unbeatable in 2019, taking a remarkable five wins and two second-place finishes from seven races to secure their second consecutive Class T title. The Ford NWM team claimed an exceptional six wins for the season, with the final event going to team-mates Marcos Baumgart and Kleber Cincea who scored their first victory on South African soil, which complemented their back-to-back Brazilian championships as well as the overall South American title for 2019.

“After coming so close to victory in 2017, it was fantastic to finally take the title in 2018 with three wins for the season,” Lance says. “Winning the championship again in 2019 was amazing. Our overall victory in the second heat of last year’s Botswana Desert Race is one of my absolute career highlights, as we beat the faster FIA-class vehicles in our Class T Ranger on the toughest event on the calendar. It was also extremely satisfying finishing second overall in the 2019 SACCS Production Vehicle Championship.”

For the 2020 season, Ford and Neil Woolridge Motorsport have set their sights on what is now the top-tier category of the sport – the FIA-class for full Dakar Rally-specification vehicles. Despite competing in an upgraded version of the existing Class T Ranger, Lance and new co-driver Elvéne Vonk finished the opening race on the podium in third place overall – an impressive result considering the exceptionally competitive FIA-class field.

Although COVID-19 has put the championship on hold, the team is currently building an all-new FIA-class Ranger which will be powered by Ford’s high-tech 3.5-litre EcoBoost V6 engine, as used in the legendary F-150 Raptor and Ford GT supercar. As it did in 2013, NWM is once again setting a new benchmark for the South African championship, as well as for cross country racing internationally. The all-new Ranger will be the first in the world to compete under the FIA’s new cross country regulations for vehicles with turbocharged petrol engines.

“This is a very exciting project as it has enabled us to redesign the Ranger from the ground up using all of our experience and success with the V8 Ranger,” Lance explains.

“We’ve nearly finished building the first vehicle and will begin testing soon, with the chassis for the second vehicle already in production. I certainly can’t wait to start driving this machine, and ultimately racing it in the SA championship when the season resumes.

“Our goal is to have the new FIA Ranger competing internationally once we’ve completed our final development work on the prototype unit. The Dakar Rally is the ultimate prize, of course, both for me and for the NWM team as a whole,” he adds. “That dream hasn’t changed, and I believe that with the new vehicle we will have a winning package.

“Competing in the Dakar Rally is very expensive, particularly when it comes to South African budgets, but with the right partners and sponsors and a long-term commitment to this campaign, I’m confident that we will be able to take on and beat the best teams in the world,” Woolridge concludes.