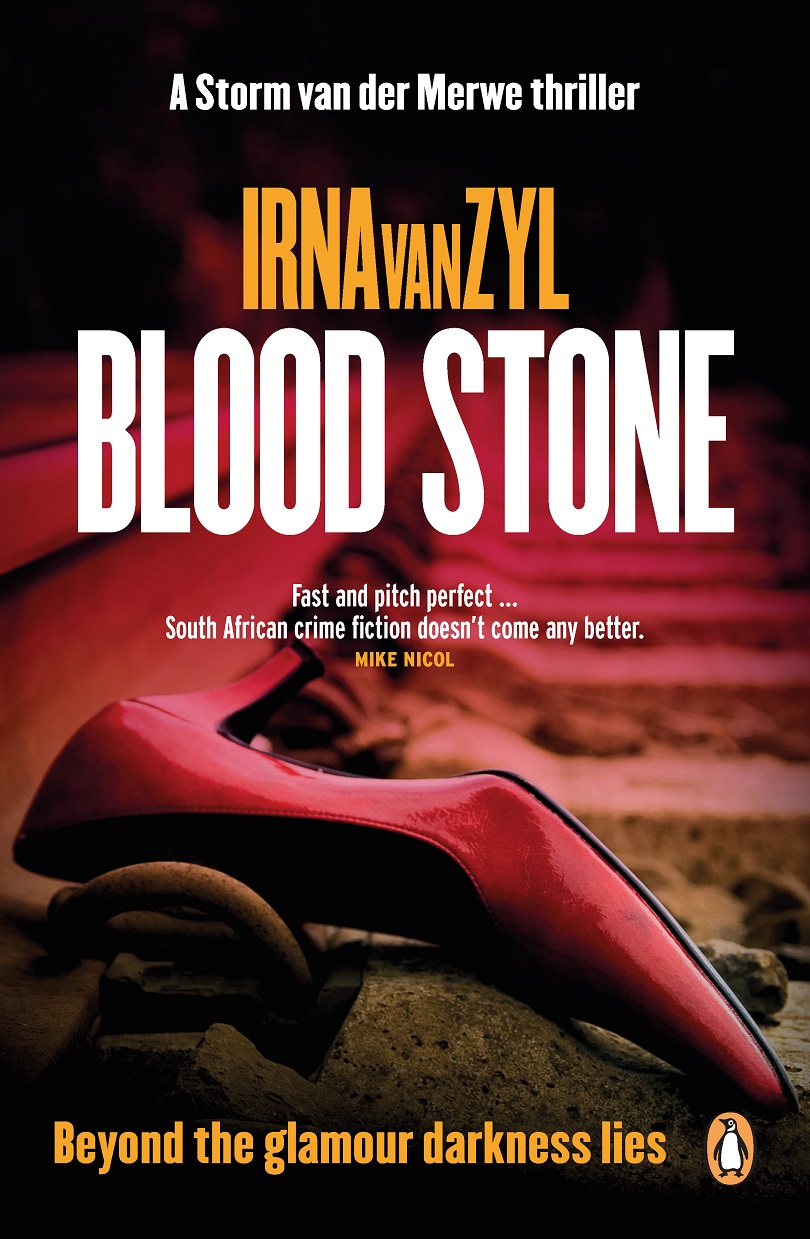 In Death Cup (reviewed, the Gremlin, June 4 2018), Storm was investigating the death of a prominent food critic.

Now in Blood Stone, her third outing, she gets involved in fashion, diamonds, murder, mayhem, kidnapping and a charismatic church led by a mysterious pastor. This as the nearby township of Zwelihle is a no-go area because of residents’ protests.

While Storm is investigating the murder of a successful overseas based fashion designer, Beebee Bukelwa Babu, at a Hermanus hotel, she gets a call that her mother, Rowena, a top flight public relations consultant is in a London hospital, St Mary’s, after she fell or was pushed under a train at Paddington railway station. Beebee is back home for a reunion with old school friends, Helen Menz and a beautiful model, Savannah, aka Bianca Jongbloed from Namaqualand who has made a name for herself on the world’s runways.

With the permission of her former best friend, Amber Cloete, now a colonel,  and Witvoet, Storm  heads off to London. While there she can’t shake off the feeling that she’s being followed. However, she is more concerned about her mother. Back home again Witvoet warns her off the case because her life is in danger. But saying no to Storm is like trying to stop a bullet train by standing in front of it. She also suspects that Witvoet is on the payroll of big-time gangster, Grootman, and she believes that Cloete, who sends her and Sergeant Shirien Niemandt to investigate a pastor who has been drawing the crowds, is also hiding something.

Retired policeman Andreas Moerdyk, now a Private Eye and a colleague of Storm’s, bumbles into the case, when after joining a dating website, he meets Hester Menz who tells him about the Red Diamond of Port Nolloth which sends him to the diamond mining town.

Storm is trying to find the motive for the killing of Detective Sergeant Roland Williamson, who was shot dead while he was waiting outside a school. The file is on Cloete’s desk gathering dust. Meanwhile the mystery man who pushed Rowena under the train has been identified as Whitey from Worcester aka Vasco Galant who is  linked to one of Storm’s old investigations.

Many of the people who appeared in the previous two books are back. Sergeant Neimandt who is pregnant; Constable Garth April; Witvoet; Moerdyk who’s not really a bumbler: he stumbles his way around, keeping an eye on Storm for whom he has a soft spot; Mona Fillies, pathologist; Storm’s dogs Purdey, Hansie and Gretjie. With a few deft strokes of her pen Van Zyl gives life to her characters.

There are many twists, turns and surprises and some sad news as the action swings from Hermanus to London and back to Cape Town to the fiery climax. Although the ending seems a bit contrived, with a nod to well-known stripper Glenda Kemp and her dancing partner, Oupa the python, which felt out of place, Blood Stone is a page-turner.