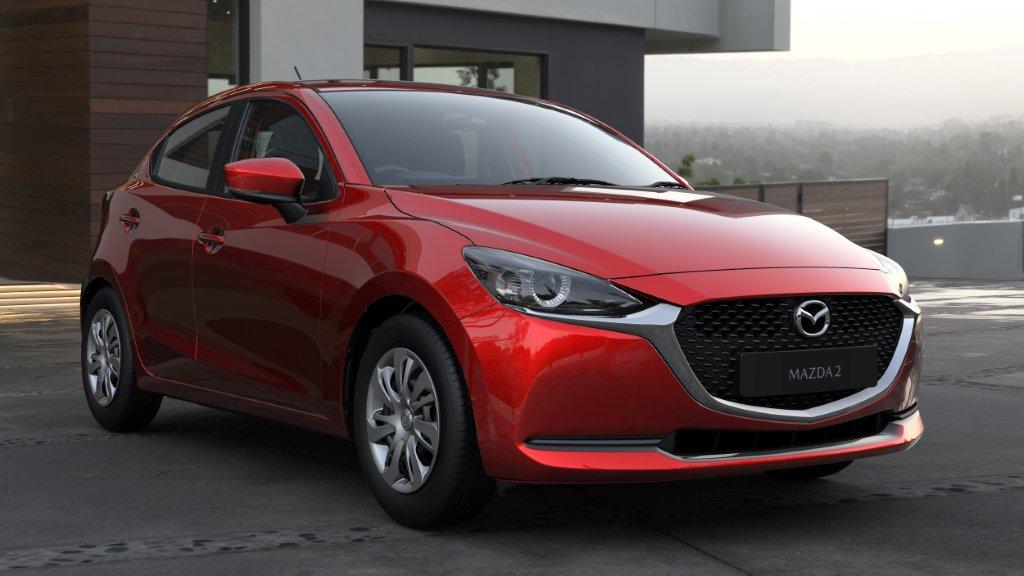 Brian Joss – The Mazda2 has been around since 2015 but the brand has been in South Africa for many, many years.

By the end of the 1970s, the  Mazda 323 was a big seller and just after the “Yank Tank” era which had proved to be so popular, especially if you were going to the drive-in: remember them?   But if you wanted big, but a bit more compact than the Americans, the Australian Holdens and General Motors’s Fords were available as were the Valiants. They were then dumped in favour of the smaller European cars. In 1976 during the “Soweto Uprisings” car sales took a pounding and one of the casualties was  Chrysler SA which merged with Illings, then Mazda, to form the Sigma Motor Corporation which also  produced the Renault.

Up front, I’ve always been a fan of Mazda, having owned two of them: one a hand-me-down 1200cc, the neighbours dubbed it  the “Purple  Peril”, not because of how I drove it but because of its original colour which had faded to a pale lilac. It ran on the smell of an oil rag and if anything went wrong, nothing much did,  it could often be repaired with a spanner or a pair of pliers and a piece of wire. The second one was an out-of-the-box Mazda 626 AT which didn’t give a day’s trouble. I don’t even remember why I sold it.

Fast forward a few years and Ford swallowed Mazda although they operated separately. About six years ago, in 2014, there was an amicable divorce and Mazda became an Independent stand-alone company. And out of the shadow of “big brother” it “zoomed zoomed” to find itself consistently among the 10 best-sellers every year with their popular CX-5, for example, which is an ubiquitous sight on our roads as is the Mazda2 and don’t forget the iconic Mazda MX-5 (the Gremlin: November 22, 2017). I’ve seen quite a number on the road in recent weeks. In fact the Mazda2’s cockpit like the X5’s is focused on the driver. Occasionally you still see an old 323 trundling along. Driven mainly by  “little old ladies”.

Four years ago I drove the Mazda2 AT (diesel) on a round trip from Milnerton to Johannesburg and back via Route 62 with an overnight stop at Prince Albert  (The Gremlin, February 29 2016). The 3 000km journey was a pleasure and the diesel was really a miser when it came to fuel consumption. In the meantime there have been some changes to the Mazda2. In 2017 it had a facelift and a spec upgrade. The same thing happened in 2019, and the Skyactiv technology which is a big feature in the Mazda marque and as it has become cheaper to produce over the years it  has filtered down to the smaller models, namely the Mazda2.

What exactly is Skyactiv? Skyactiv-G (Gasoline) is proof that the internal combustion engine lives. Basically it is a high compression engine  which tend to spark chaotically and cause engine knock.  But Mazda engineers have solved that problem by putting a combustion well above its domed pistons, injecting fuel in fast bursts. In this way it helps to control pre-detonation at ‘high-compression ratios. The engine is also reputed to be more fuel efficient.

The car under review was the Mazda2 Sky Activ G 1.5 Ceramic and the changes are very subtle but it still uses the much vaunted Kodo design principle.

It gets its inspiration from the stance of a powerful animal  waiting to pounce or a sword ready to strike in the ancient Japanese martial art of kendo. Mazda has three keywords which describe KODO: speed, tense, and alluring, the car maker said.

One of the upgrades includes a different suspension system, new front seats with a six-way electrically adjustable one for the driver. It also felt a lot more comfortable than the Mazda2 I piloted in 2016. Four years is a long time in the motoring industry and tech changes are fairly rapid. The engineers have added an “element of freshness to the design but you’ll have to look closely to play spot the difference. Another change is the adaptive LED headlamps, a stop and start function and did I mention Apple Carplay and Android auto, and let’s not forget the smooth-as-silk six-speed gearbox. If you like putting pedal to the metal then there’s radar cruise control to help you stay on the straight and narrow. For a stylish finishing touch Mazda has added new 16-inch alloy wheels in high-gloss paint.

Inside, it’s nifty-looking as well with an unusual HUD (Heads Up Display).

You can clearly see the KODO design principles at work with swooping curves that show off the front and back shoulder lines. There are also LED fog lamps. Mazda has also introduced two new colours: Eternal Blue Mica and Deep Crimson Mica, to enhance the KODO language.

The peppy and punchy 1.5-litre 4-cylinder engine delivers 82kW and 145 Nm of torque mated to a six-speed automatic gear box. It shifted smoothly through the gears and there was no hunting, neither was there any  when I took the pre-facelift model on the epic 3 000 kilometre journey which included the Reef’s high altitude  conditions. Then as now I was very impressed with the way the Mazda2 stuck to the road.

And with its handling. The steering was responsive and it proved to be an engaging car to drive.  There was hardly any wind or road noise in the cabin. Fuel consumption was good too, although Mazda claimed fuel consumption figures of 5.7l/100km. But I managed to get a respectable 6.5l/100km in a town and country and cycle. The Mazda2 can go from 0 to 100km/hr in 10.4 seconds, the car maker said.

Safety features include a Lane Departure Warning System and a reverse camera with wide-angle lens, side and curtain airbags.

Summing up: with a just a few subtle cosmetics tweaks and changes under the skin the updated Mazda2 Sky Activ G 1.5 Ceramic is better than ever.

The Mazda2 carries a price tag of R326 900 (check with your dealer) and includes a 3-year/unlimited kilometre warranty, 3-year roadside assistance, a 3-year service plan and a 5-year Corrosion Warranty.