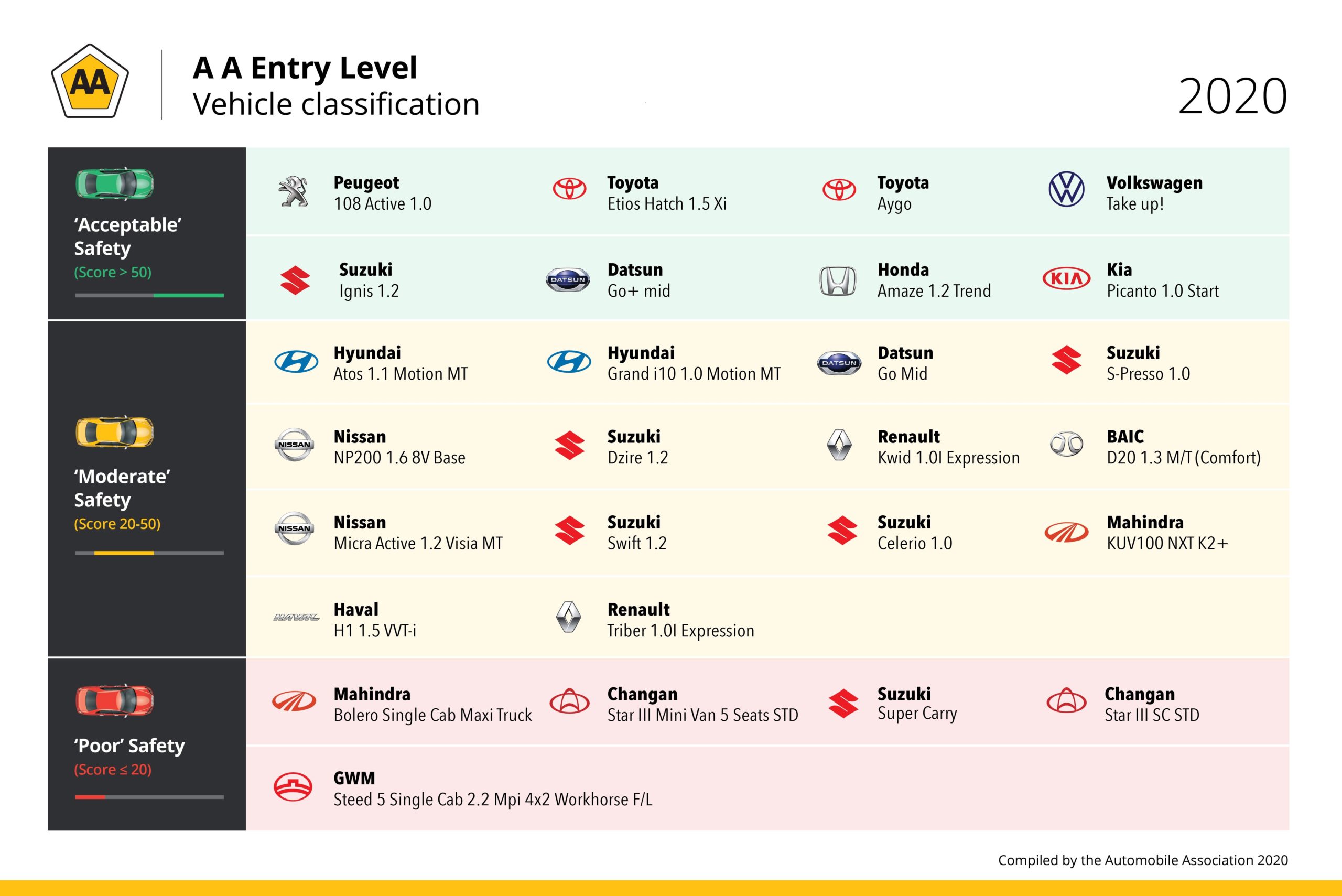 Brian Joss – The inclusion of some safety features on entry-level vehicles remains low in South Africa, although some positive developments in this regard have happened.

This is according to the 2020 Automobile Association (AA) Entry-Level Vehicle Safety Report (ELVS) which assesses available safety features on entry-level vehicles in the country.

The 2020 ELVS Report follows the same desktop research methodology as in previous years with the only difference this year being the value of entry-level vehicles which has been raised to R200 000. The 27 vehicles reviewed for the 2020 ELVS Report are assessed for safety features stated in written literature of the vehicles. The Report does not consider the structural integrity of the driver/passenger compartment.

Two important figures provide context for the development of the ELVS: South Africa’s high annual road fatality figures, and the growing vehicle population in the country. In 2019, the country recorded 12503 road deaths. The current vehicle population in the country – according to official figures from the Road Traffic Management Corporation (RTMC) – is 11 267 812, with just over 7.3 million of these being motor vehicles.

The 27 vehicles surveyed for the 2020 instalment of the Entry-Level Vehicle Safety Report were evaluated against the number of active safety features they have (anti-lock braking systems, electronic stability control), and passive safety features (airbags). Points are awarded to vehicles for the existence of each of the active and passive safety features. Additional points are awarded to vehicles crash tested under the NCAP system, in this case Global NCAP’s #SaferCarsforAfrica programme. Twelve vehicles available in South Africa have so far been tested under this system.

The 27 vehicles are categorised into three groups based on their safety ratings. These categories are: Acceptable Safety, Moderate Safety, and Poor Safety.

However, the Association says it is encouraging that 26 of the 27 vehicles are equipped with Anti-lock Braking Systems (ABS) and that 26 vehicles have front driver and passenger airbags. The least common safety feature was curtain airbags (only one vehicle) and side airbags (only three vehicles).

In 2019, the AA supported the #StopTheCrash partnership to demonstrate the effectiveness of, amongst other technologies, ESC and ABS. The technologies which were showcased have the potential to save thousands of lives every year, and the United Nations has developed international standards to help encourage countries around the world mandate these life-saving technologies.

“We repeat the call we made then for the government to urgently review current minimum standards which are simply not good enough and to press for the mandatory inclusion of these technologies in all vehicles, including those at the entry-level,” says the AA.

“A significant finding of this year’s report is that only three of the vehicles are equipped with Electronic Stability Control. This is particularly concerning as ESC is a proven technology which can reduce road crashes. It’s astonishing and discouraging that so few vehicles come equipped with this technology as standard for entry-level vehicles,” notes the AA.

The Association further notes that when considering that the annual cost of crashes in South Africa which is estimated at around R163bn by the Road Traffic Management Corporation (RTMC), the inclusion of this technology should be standard practice not only from a life-saving perspective, but also from an economic perspective.

The Peugeot 108 received the highest safety rating of 110 points. The Peugeot 108 was the only entry-level vehicle to include a curtain airbag, and it was also the only vehicle to include all safety features considered in this report. The vehicle would probably have obtained a higher score had it been crash tested, and the AA therefore recommends that all manufacturers crash test their vehicles. These tests will not only improve the safety results of the cars but will also provide authoritative demonstrations of the vehicles’ safety levels.

The AA notes that this is desktop research and that the definitive measure of a vehicle’s safety can only be acquired through crash testing. Similar to the Datsun Go+, the Nissan NP300 would have scored highly in this research but it scored zero stars in the Global NCAP crash testing. The data presented here should be used as an indication of a vehicle’s safety equipment, and not as the sole indicator of the vehicle’s overall safety rating.

In addition to scoring the vehicles purely on safety features, the ELVS Report also considers safety weighed against affordability. In this scenario, the score achieved by a vehicle for its safety features is measured against its cost to arrive at a Safety/Affordability Score. The Index can be used as a guide to understand the “Affordability of Safety” proposition of vehicles.

A complete breakdown of the Affordability/Safety Index, and the methodology used to calculate the scores is contained in the ELVS Report.

Information on Global NCAP and #StopTheCrash available at: