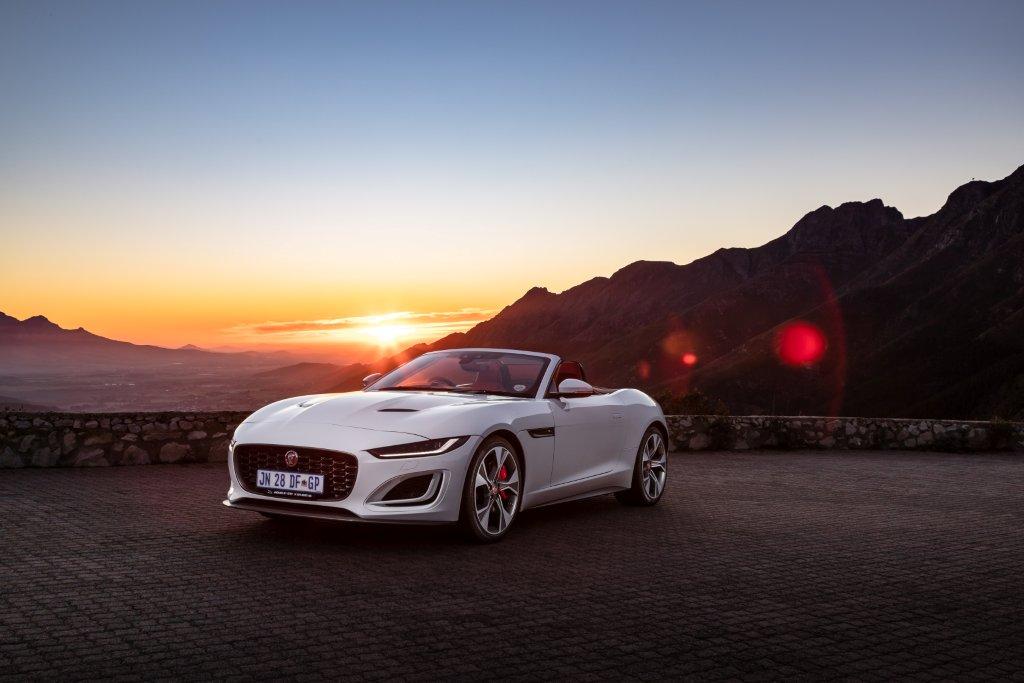 Brian Joss – The new Jaguar F-TYPE has arrived in South Africa with an even more dramatic design, improved dynamics and increased focus on driver engagement.

The surfaces of its new clamshell bonnet flow down to a grille that retains the proportions of the original’s but is slightly wider and deeper with a new hexagonal mesh pattern. Fender vents now feature the Jaguar Leaper motif and updated bumpers at the front and back have been updated to offer greater differentiation across the model range, from F-TYPE R-Dynamic to the range-topping F-TYPE R.

Like the exterior, the F-TYPE’s driver-focussed 1+1 interior has been refined with discreet details and a heightened sense of luxury and sportiness. Along with deployable centre air vents, the start button’s pulsing red ‘heartbeat’ conveys a sense of theatre for the driver, while ‘Jaguar Est.1935’ markings on the centre console finisher, glovebox release button surround and seatbelt guides offer subtle reminders of Jaguar’s rich heritage.

The cockpit now features a 12.3-inch HD TFT instrument cluster with reconfigurable graphics unique to the F-TYPE. Drivers have a choice of display themes, including a full-screen navigation map, but in true sports car fashion the default mode is set to a large central rev-counter.

Rich materials such as Windsor leather, Engine Spin metallics and satin-finish Noble Chrome add touches of luxury, and are complemented by beautifully-crafted monogram stitch patterns – repeated in the door trims – and Jaguar Leaper or R motifs embossed in the headrests.

Lightweight slimline seats with optional heating and cooling functions come in two forms: Sport and Performance. The F-TYPE R-Dynamic model comes with the purest Sports version as standard, while the R and First Edition models get a Performance seat with more pronounced support at shoulder height.

Three engine options are available to South African customers starting with a 221kW/400Nm Ingenium 2.0-litre 4-cylinder P300. This model dashes from 0-100km/h in 5.7 seconds and on to a top speed of 250km/h, with an average combined fuel consumption of 7.2l/100km.

An ever-popular supercharged 3.0-litre V6 P380 with 280kW and 460Nm delivers 0-100km/h in just 4.9 seconds and maximum speed of 275km/h. The V6 is offered with a choice of rear- and all-wheel drive, and benefits from a mechanical limited-slip differential.

Its Quickshift transmission has been recalibrated for even faster, crisper gear changes via the steering wheel-mounted paddles or the SportShift gear selector. A torque on-demand all-wheel drive system combined with Jaguar’s Intelligent Driveline Dynamics (IDD) control technology delivers immediate throttle response in all gears, on all surfaces and in all conditions.

A recalibrated electric power-assisted steering (EPAS) system offers immediate responses to driver input, while new springs and anti-roll bars further enhance the continuously-variable dampers at the core of Jaguar’s Adaptive Dynamics system. The valves inside each damper and the control algorithms have been recalibrated to improve both low-speed comfort and high-speed control.

The rear knuckles are now aluminium die castings, which, together with new, larger wheel bearings and revised upper ball joints increase camber and toe stiffness by 37 per cent and 41 per cent respectively.

The F-TYPE R is fitted as standard with large 380mm and 376mm front and rear brake discs, but can be specified with Jaguar’s optional Carbon Ceramic Matrix (CCM) braking system. Featuring even larger 398mm and 380mm discs and six- and four-piston monobloc calipers with a distinctive yellow finish, this system delivers exceptional braking performance with outstanding fade resistance.

A set of specially-developed Pirelli P Zero tyres, 265/35/ZR20 and 305/30/ZR20 in size, are 10mm wider than before and provide exceptional levels of grip. These are paired to new 10-spoke, 20-inch wheels in Gloss Black with contrast Diamond-Turned finish and are exclusive to the new F-TYPE R.

All three engines feature active exhaust systems, which are switchable either as an option or as standard. Customers who choose the 423kW supercharged V8 benefit from the new Quiet Start function, which ensures a more subtle, refined sound – the electrically-actuated bypass valves in the rear silencer remain closed until they automatically open up under load. If desired, Quiet Start can be over-ridden by selecting Dynamic Mode or by pressing the switchable exhaust button before starting the engine.

The distinctive crackle and pop on the overrun synonymous with F-TYPE, remains, the sounds meticulously tuned to suit the range of powerful four-, six-, and eight-cylinder engines.