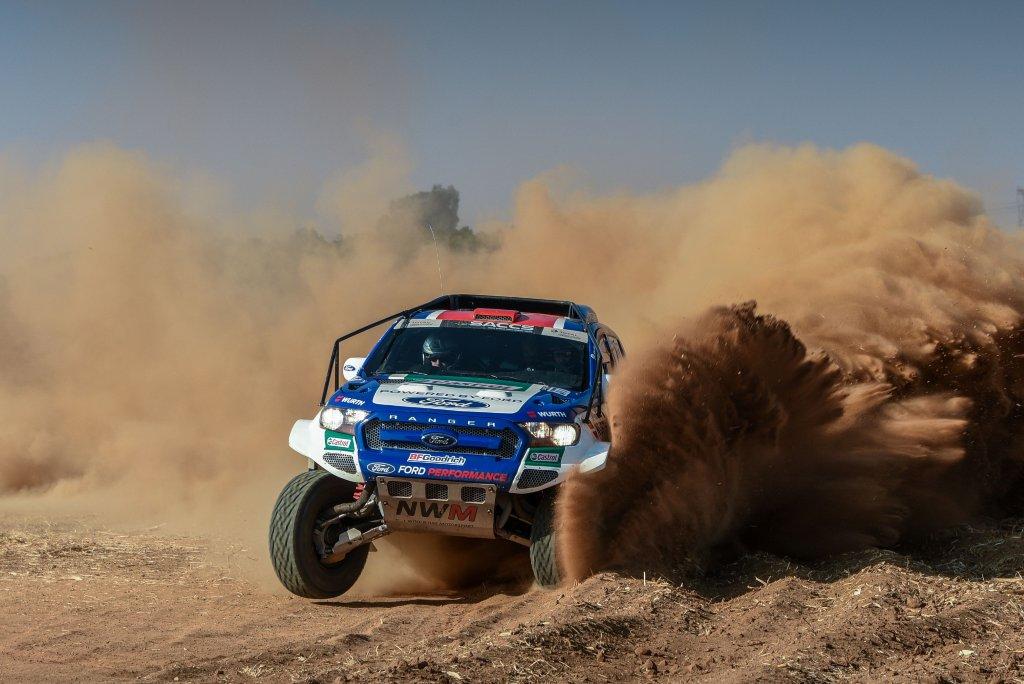 Brian Joss – The South African Cross Country Series (SACCS) finally returned to action this weekend at the Bronkhorstspruit 400, the second round of the 2020 championship following an almost six-month hiatus due to the COVID-19 lockdown.

For the Ford Castrol Cross Country team, it was a largely incident-free two days of racing in the extremely dry and dusty farmlands located on the provincial border of Gauteng and Mpumalanga.

Gareth Woolridge and Boyd Dreyer (#377) were the top-ranked Ford Ranger, completing the fast and furious 367km of racing in sixth place overall.

This was the young crew’s first race in 14 months in the Neil Woolridge Motorsport (NWM) designed and built Ford Ranger, and their first outing in the premier FIA class. They completed Friday’s short sprint-style 67km qualifying loop fifth quickest, just 10 seconds behind team-mates Lance Woolridge and Elvéne Vonk (#334) who set the fourth-best time.

The first 150km loop on Saturday saw both Woolridge brothers encountering minor trouble, with Gareth and Boyd beaching their Ranger in the soft sand at one of the route’s road crossings – a mishap that cost them almost two minutes.

Lance and Elvéne suffered a broken damper spring on the right front suspension at the 104km mark after hitting a mound in the road – the first such failure since the team started racing the current Ranger in 2013. The Bronkhorstspruit area features extremely fast farm roads interspersed with some tricky rocky sections, which places huge demands on the vehicles and ensures that the crews are kept on their toes at all times.

Although the dual-damper set-up ensured they could continue without drama, it did impact their overall pace slightly for the remaining 46km. The entire damper was replaced at the mandatory 30- minute service stop, and they completed the second loop of the race without any other issues, eventually crossing the line seventh overall and in the FIA class.

Gareth and Boyd also had a clear run on the second stint, and once the overall final times were logged, they emerged in sixth place, 47 seconds ahead of their team-mates – with both Rangers finishing the race without a single puncture. Although the results weren’t what the team had hoped for, they could take solace in that the two Ford Castrol NWM Rangers were the top-scoring solid- rear axle entries in the Production Vehicle category, compared to the more advanced independent rear suspension (IRS) of their podium rivals.

“Overall, it was a good weekend for us having not raced for the past 14 months, so we weren’t all that confident at the start, but we soon found our rhythm and started pushing,” Gareth said. “Aside from getting beached in the sand on the first loop, we had a clean race and went almost four minutes faster on the second loop, and the car performed perfectly.”

Lance commented: “It was a bit of a frustrating race for us. I drove as hard as I could, but without cutting corners or making mistakes. Clearly, this race doesn’t seem to suit our current solid rear axle set-up, but we scored some good championship points and the cars were reliable, so we did our best.”

Although the team is competing this year in the premier FIA category, both of its current Rangers are the same vehicles raced in the lower-spec Class T championship in 2019, with brake upgrades and top-level BF Goodrich tyres being the only changes made for this year – in anticipation of the all-new 3.5-litre EcoBoost V6 twin-turbocharged FIA Ranger making its debut soon.

“It was great to finally be back racing again after a very long lay-off,” said NWM team principal, Neil

Woolridge. “We knew coming to Bronkhorstspruit that it would be a tough race, as we don’t normally do well here, with this type of terrain definitely suiting the IRS vehicles better. Other than the unusual damper spring failure on Lance’s car, and Gareth unfortunately getting stuck in the soft sand, our Rangers ran faultlessly.

“We have to remember that we are competing against world-class entries from rival teams, with all of the vehicles that finished ahead of us being fully-fledged latest-generation FIA-specification Production Vehicle and Special Vehicle entries that won Dakar Rally stages this year,” Woolridge added. “With that in mind I think we did relatively well, and it just proves how competitive the premier class in the SACCS has become.”

The next race is the Nampo 400 which takes place near Bothaville in the Free State, on 18 and 19 September.