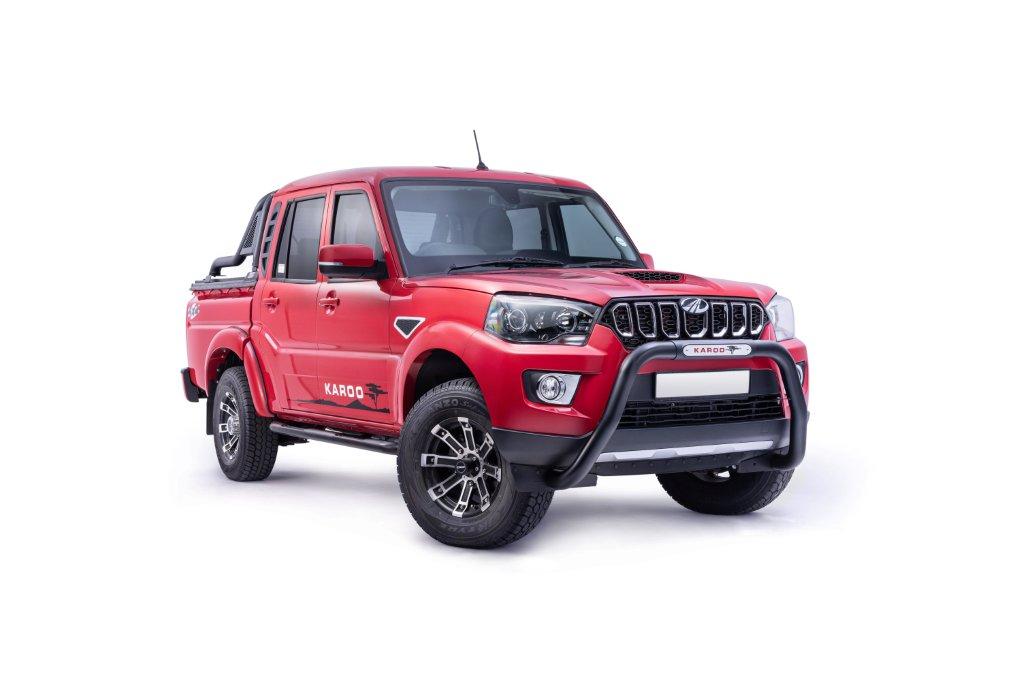 Brian Joss – When this big boxy, and let it be said, odd-looking 4×4 arrived in my driveway, I couldn’t wait to hit the nearest off-road track in Atlantis.

But life often gets in the way of plans and  there was a torrential downpour and I wasn’t going to risk getting pneumonia or any other lurgee lurking about.

So what was it? It was Mahindra’s newest S11 Pik Up 2.2 litre turbodiesel six-speed automatic. The Indian car maker used South Africa to launch the automatic range globally, an  indication of how seriously they view the market here thousands of kilometres away from the sub-continent.  The Pik Up was also put through its paces at the Gerotek centre near Pretoria, a tough testing ground for any vehicle. Let alone a big 4×4 which meant that one of my shorter passengers had to use a stool to climb aboard, and the lack of proper grab handles at the back, and front,  didn’t help matters either.

Make no mistake, the Mahindra Pik Up is big. Very big. The only elegant feature about it from an exterior view is the redesigned curved grille and bumper, upgraded headlamps and other subtle changes to make sure that it immediately stands out as the top-of-the-range mode, Mahindra said. Well, it’s so big that it stands head and shoulders above the usual crop of vehicles at the Mall. So you couldn’t miss it if you tried, and if you found a parking bay big enough. It has a huge turning circle which means some sweat and tears if you need to park in a small space. Otherwise, do what I did, give up and go somewhere else where the bays are bigger.

The six speed automatic gearbox is a next-generation transmission used for the first time in the double cab.  The Pik Up is powered by Mahindra’s much-vaunted mHawk 2.2 litres turbodiesel engine which delivers deliver 103 kW at 3 750 r/min and 320 Nm at a flat band between 1 500 r/min and 2 800 r/min. And Mahindra claims fuel use of 7.9 l/100km.

Inside, the interior is a pleasant place to be. It has all the mod-cons you need including a new 7 inch touch screen infotainment system with a capacitive interface. It offers Bluetooth connectivity, several entertainment and vehicle information screens as well as turn-by-turn navigation as standard. The screen also displays the image of the inbuilt reverse camera in technicolour, and the picture is quite sharp. It also has automatic climate control. A bit irritating was the indicator that didn’t always automatically turn off when it was supposed to and whenever you hit a pothole the glovebox opened so you had to slam it closed, much like the heavy doors. A neat touch, I thought, was the basic first aid kit stowed in the cubbyhole, ideal for patching up minor scratches and bruises if you injure yourself in the rough.

I didn’t have a chance to take the Pik Up to the “bush” but I did drive on a badly rutted gravel road at one stage and the Mahindra behaved well. By all accounts it is a more than capable 4×4: maybe next time.

We did take a trip out to Stellenbosch through the winding hills past some of the prestigious wine estates which were still closed because of lockdown level 3.  Usually, they’re a hive activity with workers in the fields,  tractors ploughing up the land and heavy trucks taking the grape to the nearest co-op or winery. However, it was eerily quiet. Also to Hout Bay where the Kloof Nek Road didn’t pose much of a challenge.

However, it beats me why there is a 60km/h limit on the Hout Bay road: even you just coast you’ll be over 60km limit before you know it.

But back to the Mahindra Pik Up 2.2 litre six speed automatic. It’s so heavy that it takes a while to get moving but once it gets going it cruises along happily, up and down dale without much effort. There was the occasional glitch when for one reason or another the Pik Up would take a few seconds to shift in to first, but then the six-speed worked almost  seamlessly. Although I did detect the odd bit of hunting.  The brakes are excellent as they proved when one Sunday-Monday driver decided one chilly Tuesday to stop at the green because he thought it was red.

Safety features include Hill Descent Control (HDC) system that uses engine and vehicle braking for slow descents on tough, off-road terrain and that can be controlled with the in-built cruise control system, Mahindra said.

For those interested in the more technical aspects:  all double cab models feature a standard ground clearance of 210 mm, an approach angle of 34 degrees and a departure angle of 15 degrees. The high standard ground clearance and narrow-fitting side rails mean that the Pik Up has a very impressive breakover angle of 18 degrees, Mahindra pointed out.  The 4×4 can transport up to 995 kg and it is certified to tow a braked trailer of up to 2 500 kg. It also has a mechanical differential lock (MLD), which features complete lock-up between the rear wheels when there is a loss of traction, in challenging off-road conditions. There are two airbags, 12V power points for the front and rear occupants, traction control, electric windows with an automatic up/down mode on the front windows and automatically locking doors.

Surprisingly, the Mahindra Pik Up S11 automatic performs well. At start-up it is a noisy and you can tell by the thrum that it’s a diesel. It does take a while to get going but once it does it moves at a pace. The cabin is relatively free of wind noise. However, the Mahindra Pik Up is not built for speed and is probably happiest cruising at about 110km/h.  It was quite at home in heavy traffic and the six-speed automatic, which shifted through the gears fairly smoothly helped in this regard.  The Pik Up is not a sedan so don’t expect a comfortable car ride. Unladen you can feel every bump and grind.  At a push you could use it for your daily commute or if you’re in the market for a “bakkie” for your business, hauling lumber or large appliances, you could do worse. The figures I recorded in a town and country cycle was a worthy 9 litres/100km.

Lots of good things come from India: world class cricketers like MS Dhoni who recently retired; Sachin Tendulkar; curry and rice;  the  Taj Mahal, where Princess Diana pensively posed for the world to see and all those Bollywood actors. Now Mahindra’s vehicles have joined the cast on the global stage.

Mahindra offers a Karoo version of the Pik Up automatic which features a unique decal design on the side to give it that cool factor. This special edition has a rubberised load bay, off road ready alloy wheels,

nudge and styling bars. This model also has a custom-designed and lockable roller deck system for the load box as standard.

Would I buy one?  I would give it serious consideration if I needed a solid hauler for my business to move appliances or lumber. It would be ideal for weekends away in the rough stuff, but because of its  size I am not sure if it would be suitable for the daily grind to and from work. That said, I think that in South Africa the Mahindra is under-rated but the newest Pik-Up will go a long way towards dispelling that myth.