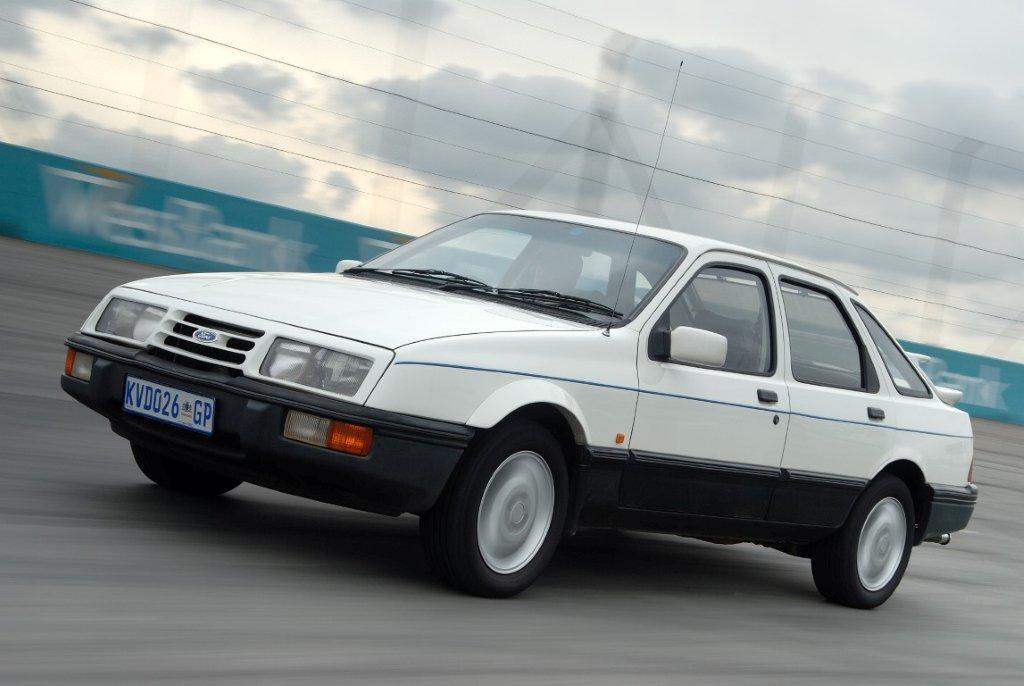 Brian Joss – Ingenuity and determination. These are two traits that South Africans have in abundance, especially when it comes to building bespoke vehicles that would eventually become revered the world over.

Even by today’s standards Ford’s model range in South Africa can appear very different to those in other markets, but this contrast was exaggerated during the country’s pre-democratic era, when sanctions severely limited access to a wide range of models available overseas.

Undeterred, and with plenty of technical expertise to draw upon, South Africa went through a period of fascinating homologations that produced a dazzling array of road cars that performed exceptionally well on the sales charts, and even took the motorsport world by storm, leaving an indelible mark on the country’s motoring heritage.

Ford’s earliest traces in South Africa go back to 1905 when Port Elizabeth-based Arkell and Douglas were appointed as the first Ford agents in the country. Laying the foundation, Ford Motor Company of Southern Africa

(FMCSA) was founded in 1923, and a year later Ford opened its assembly plant in a converted wool store in PE to assemble Model T cars from export kits shipped from Canada. By 1930, Ford opened a new purpose-built factory in the Friendly City.  Suffice to say, the rest is heritage!

During Heritage Month, FMCSA pulls back the covers on some of its homegrown models that shaped the company into what it is today, establishing a loyal set of supporters and advocates for Ford that has been growing ever since.

If not directly created for motorsport, many of FMCSA’s heritage models were inspired by it. During a period of exclusion from several markets, South Africa looked inward for a solution and found it through a number of world-class automotive engineers and drivers. Motorsport in general was the main catalyst for many of these models, but in order to compete, the rules (known as homologation) usually required that a certain number of road-going versions be built. This led to some toned-down road cars that have gone on to become classics that are highly revered and sought after – both locally and internationally.

Although the Ford Sierra was sold in other markets, its reputation as a performance car was cemented in South Africa, under the project name of ‘Toni’. Perhaps the most well-known is the flagship Sierra XR6 which used the the 3.0-litre Essex V6 produced at Ford’s Struandale Engine Plant in Port Elizabeth. A race car for the road was conceived, with 112kW and 236Nm pushed through sharpened handling.  The Sierra XR6 was more than a little inspired by South Africa’s Cortina XR6 – and the more powerful and rarer Cortina XR6 Interceptor – that preceded it.

When the Sierra XR6 ended production in 1992, it was replaced by the fuel-injected 3.0iRS the following year. By comparison, this model produced 117kW and 260Nm. The development of the fuel-injected V6 was a joint effort by the South African Motor Corporation (SAMCOR), the predecessor to FMCSA, and Lucas during the mid-1990s and, according to the industry sales figures of the time, around 500 models were sold during the three years of production.

The Sierra’s most spectacular evolution, in the sense of a South African homologation, was the XR8 – often described as a South African muscle car and raced successfully in the 1985 Group 1 championship by John Gibb and Serge Damseaux. Production in the mid-1980s was limited to 250 units, decided by the ‘one-time-buy’ component of 250 component sets.

Instead of the V6 engine, these XR8s were fitted with a Mustang-derived 5.0-ltre V8 which was imported directly from the US. According to Classic Car Africa’s Stuart Grant, it’s said that Ford locally designed 96 components from new, while a further 150 were modified XR6 items. Power of 161kW and torque of 374Nm enabled a top speed of 231km/h and a 0-100km/h time of 6.95 seconds – impressive figures for 1984!

The V8 was mated to a Granada five-speed manual gearbox with shortened input shaft and brake discs all round. Additional upgrades unique to the car included 15-inch Ronal alloy wheels machined to fit over the large brake disc callipers, and the beguiling bi-plane rear spoiler. All XR8s were painted white with motorsport triple blue pin-stripe and grey trim.

South Africa’s Sierra history was so groundbreaking at the time that immediately after sign-off, one Sierra XR8 was purchased for display at Ford’s World Headquarters in Dearborn.

Johannesburg businessman and SA Hall of Fame inductee Basil Green is synonymous with modifications of Fords in the late 1960s and 1970s, not least of which is the Capri Perana V8 which was SA’s fastest locally produced road car and was unbeatable on the track. Powered by a lightweight

V8 from the Mustang, the mighty Capri Perana race car was capable of over 270km/h and topped the saloon car lap records at every one of South Africa’s racetracks. Around 500 of these Capri Peranas were built by Basil Green Motors, and their rarity is catapulting their value both on home soil and abroad.

Outside of motorsport, Ford’s reputation for toughness was being forged initially by vehicles like the Ford Cortina bakkie – exclusively sold in South Africa and a true embodiment of the country’s heritage. The Cortina bakkie was instrumental in building many of the landmarks that we see around us today, and helped fuel South African’s affinity with the venerable bakkie (or pickup).

According to Grant there might be no other vehicle that symbolises South African motoring more than the Ford Cortina bakkie. Eight prototypes including the Mk1 Cortina, Corsair, Mk2 Cortina station wagon, Mk2 Cortina sedan and even an Escort panel van were built at Ford’s Port Elizabeth plant until the Cortina bakkie was launched in 1971.

“In 1975, with the arrival of the updated MKIV Cortina on the horizon, FMCSA’s product engineers were given the task of creating a more powerful and better bakkie capable of carrying a psychologically magical ton. The MKIV Cortina bakkie launched shortly after the new Cortina did in 1977, and besides the ever-reliable 1.6-litre four-cylinder engine, it was also offered with the renowned Essex 3.0-litre V6. So popular was the design that it was exported to Europe as the P100 in 1982,” explains Grant.

It paved the way for another South African legend, the Bantam bakkie. This half-ton small utility vehicle with passenger car-derived handling and safety used the locally produced 1.3-litre Kent engine as well as the UK-sourced Fiesta engine ancillaries. The rear suspension used a strengthened axle from the British Escort GPO Van. The RoCam engine which powered later generations was a key part of the Struandale Engine Plant story, with 1 346 919 units produced from 2000 to 2012. Ford also locally developed an economical naturally-aspirated 1.8-litre diesel model.

Ford’s 96-year manufacturing heritage in South Africa would be incomplete without the internationally successful Ford Ranger, which has been assembled locally since 2011 and is exported to over 100 market around the world.  Two totally unique versions of the Ranger have been added to FMCSA’s Heritage models – and have helped reaffirm Ford’s commitment to South Africa. This is embodied in the ‘Ford For South Africa’ brand campaign which aims to create a brighter future for South Africa.

“Ford has been an integral part of the automotive landscape in South Africa since local assembly of the Model T began in Port Elizabeth in 1923. Ford remains one of the country’s largest vehicle manufacturers and exporters and these heritage cars have added wonderful gravitas to the local Ford story,” says Neale Hill, managing director of Ford Motor Company of Southern Africa (FMCSA).

“Heritage month complements our ‘For South Africa’ brand campaign that goes beyond just highlighting Ford’s corporate and product legacy. It captures the essence of what makes Ford, and the Ford family in South Africa, deeply involved and committed to this wonderful and vibrant country,” Hill adds.

Heritage Day in 2019 was shown in all its splendor by a one-of-a-kind Ford Ranger painted in the colours of the South African flag, and included its rich diversity of cultures, arts and wildlife by FMCSA’s own Paint Shop at the Silverton Assembly Plant in Pretoria. It took a team of five artists, three sprayers, and one assembler a total of 650 hours to produce, with the result reminding all South Africans how much the nation loves bakkies.

Unique South African artwork reappeared on a Ford Ranger this year – given the name Mandla by employees at Ford’s Silverton plant – for Mandela Day in July 2020. The South African flag features again with a portrait of the country’s iconic former statesman, Nelson Mandela, painted on the bonnet.

While the 2019 Heritage Ranger remains part of Ford’s collection, ‘Mandla’ was donated to the Nelson Mandela Foundation to support the fight against poverty and inequality.

As FMCSA closes in on a hundred years of local manufacturing, its esteemed local heritage becomes even more cherished by those who have worked on these defining motoring icons. Their positive attitude and competitive spirit continues to inspire the next chapter of Ford’s proudly South African heritage.