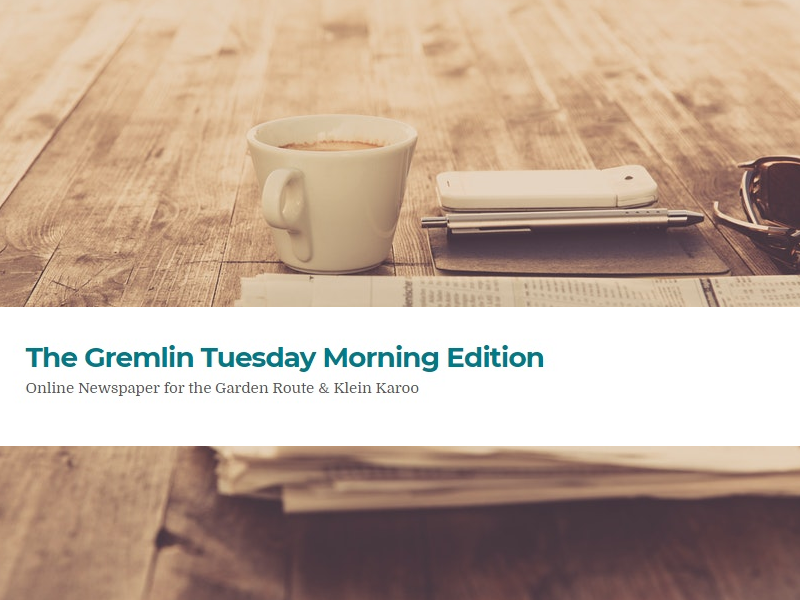 The passing of Ruth Bader Ginsberg has raised the stakes in the coming elections to even greater heights,  Both sides will say that the vacancy should/should not be filled – like they always have – that’s politics.  But threatening to burn down the country is not.  Not sure the Democrats have any more weapons – they’ve been burning down the country for months already. Trump moves to further isolate Iran.

The rest of the news is pretty much irrelevant, although it’s good to see out batsmen showing early form in the IPL.  The Lions tour is shaping up to be an epic – just hope we can get our guys match fit by then.

July 2021 marks the Centenary of Wilderness and a public meeting to establish a Centenary Committee to facilitate the festivities leading up to July next year, which took place last week with Covid-19 protocols in place.

What happens when three diverse artists decide to collaborate on a song to celebrate South African women…? A delightful Afro pop track is released, which is just as beautiful and unique as the colorful ladies that inspired it.

Knysna Labour Centre and Plettenberg Bay Satellite Office has been closed due to a confirmed case of COVID-19.

The Boplaas Family Distillery has launched a super-premium, single-cask grain whisky that was aged for eight years in port and bourbon barrels.

Established wine regions often carry an allegiance to their long history with great heritage, but every now and again you find a hidden pocket of beautiful wines that break away from that mould.

George Hospital one of ONLY six in the World

George Hospital is one of only six hospitals in the world that were selected to participate in The Balcony Bands Mural Project by painting six murals that depict the coming together of people during the COVID-19 pandemic in 2020.

With National Heritage Day coming up on Thursday 24 September 2020, GO GEORGE passengers need to take note that the Saturday bus schedules will be followed on this public holiday.

The GO GEORGE bus service will be rerouting several routes to accommodate construction work in Market Street near the intersection with York Street this Sunday, 20 September 2020, between 07:00 and 15:00.

During the Covid-19 crisis period, contact details and office hours of some services may differ from the usual operations. Please see below.

Use of Municipal Sportsfields and Stadiums

The George Municipal Sports Department, Community Services requests all members of the public as well as Sport Associations to note that the use of any of the municipal sport fields and/or sport stadiums must be formally requested and pre-booked via their offices prior to any event taking place.

‘After the treatment of Justice Kavanaugh, I now have a different view of the judicial-confirmation process’

Choosing not to fill a vacancy would be a historically unprecedented act of unilateral disarmament.

US announces new Iran sanctions, but most nations reject the move at UN September 21, 2020

Speaking at the 75th anniversary of the UN during an unprecedented time which forced around 200 countries’ leaders to take the high-level meeting online, President Ramaphosa said that now was the time for the world to stand together.

The deadline for motorists to renew any vehicle licence disks that expired between March and May is the end of business on Tuesday.

Back to school for all teachers working from home September 21, 2020

All teachers granted permission to work from home due to COVID-19 have been instructed to go back to school from today, now that the country has moved to lockdown level 1.

BIG READ: A rugby Test tour of biblical proportions is shaping up

A comprehensive wrap of all the kick-off times, results and match reports for this weekend’s English Premiership matches:

Quinton de Kock will not be test captain: Boucher September 21, 2020

South African cricket is waiting for the appointment of a new convenor of selectors before naming their test captain but head coach Mark Boucher has confirmed it will not be limited-overs skipper Quinton de Kock.

De Villiers smashed 51 off 30 deliveries to guide last year’s wooden spooners Bangalore, captained by Virat Kohli, to 163 for five and a 10-run victory in Dubai.

The very popular and talented Dozi, released his first single, Partykeer Somtyds, from his nineteenth album, Vrede in May this…

Brian Joss – This is the moment that South African motorsport fans have been waiting for; not only will South…

Join the Superheroes in a new world of eGaming

Brian Joss – The world has been in some varying degrees of lockdown; will we ever recover? Will we survive…

The Monetary Policy Committee’s decision to keep the repo rate stable was not entirely surprising, as the 300bps rate cuts…

How digital came to the rescue

By Desirée Gullan, Co-founder and Executive Creative Director of G&G Digital Coasting through the COVID-19 era has its ups and…

An involuntary VDP application is invalid

Voluntary Disclosure Programme (VDP) applications have been a permanent part of our law since 2012. The essence of a VDP…