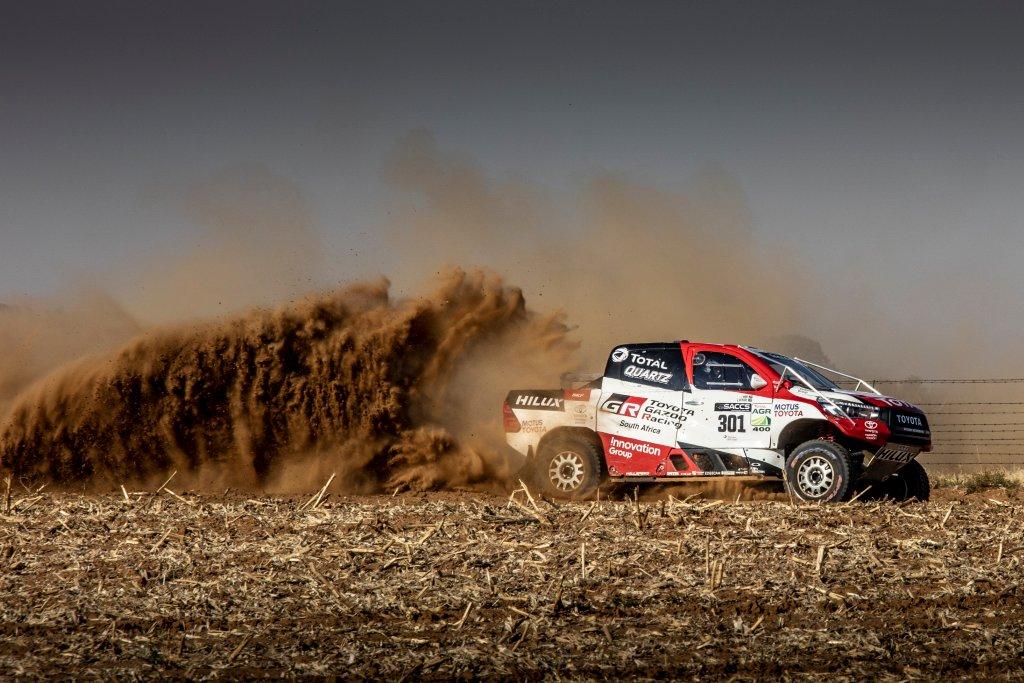 The pair won the qualifying race leading up to the event, and set off in pole position as a result. But it wasn’t an easy victory in the end.

The pair set the pace early on, but came across two closed gates in the middle of the first loop of the main event. They lost some time opening them, and gave up more time searching for the route in the long grass. The organisers refunded their time for the gates, but a titanic battle for the overall victory played out during the race.

Lategan/Cummings’ main challenge came from Brian Baragwanath and Taye Perry, in their Century CR6 buggy. The two-wheel-drive buggy is known for its pace over open terrain, and pushed the Class FIA Toyota crew hard throughout the race. Baragwanath/Perry started the race down in the order after incurring a time penalty for deviating from the route during the qualifying loop, but the Dakar quad rider made up significant time during the first loop, putting himself in a position to challenge for the overall victory during the second race loop.

“As a matter of fact, Brian pipped us during the first loop, and we set off behind him at the restart,” said Lategan after reaching the end of the race at NAMPO Park, on the outskirts of Bothaville. “We immediately pushed to try to overtake him, but it was just too dusty.”

The Toyota Gazoo Racing SA crew fought a ding-dong battle with the buggy crew, eventually catching up with the flying Baragwanath. The choking dust kicked up by the buggy, however, saw Lategan/Cummings suffer a puncture shortly before the end of the race.

“We had only 7km to go, and knew that a tyre change could lose the race for us, so we simply went for the finish on three wheels,” continued Lategan.

“In the end, we managed to hold onto our lead, and eventually took the checkered flag 2min 01sec ahead of them.”

Both crews fighting for the lead had to also fend off a charge from Chris Visser and Danie Stassen, in their Class FIA Toyota Hilux. Visser excelled in the deep sand, which was reminiscent of his home terrain near Vryburg.

However, the engine developed a technical problem during the second loop, and the pair were forced to the side lines.

This opened the door for Toyota’s Shameer Variawa and navigator Dennis Murphy to capitalise on a steady performance throughout the weekend. The businessman was ecstatic to secure his first podium of the season, ensuring that two of the top three spots went to Toyota.

Dakar legend, Giniel de Villiers, racing with stand-in navigator Juan Möhr in Bothaville, started the race as the second car on the road, after Baragwanath’s penalty. Two early punctures, however, cost the pair dearly, and dropped them down the order. They fought back throughout the race, eventually settling for 5th in the final standings.

“It was an interesting race,” said the ever-calm De Villiers after the race.

“When we stopped to change the puncture, we found the front brakes had set fire to the long grass. Juan had to put it out to save the car, and suffered a minor burn to his one hand. As I got back into the car, Juan saw that the rear tyre was also flat, and we had to change that one as well.”

Despite the punctures, the pair reported no issues with the Class FIA Toyota Hilux, which bodes well for the upcoming Dakar Rally – still scheduled to take place in January 2021.

The next round of the 2020 SACCS is a double-header at Parys, where both Round 4 and 5 will be decided over the course of a single weekend. This will be a last chance for De Villiers to make inroads on his younger rival’s lead in the championship, and promises to be an exciting affair – with or without spectators.

CAPTION: Eat my dust: all the action at Agri 400. Picture: Motorpress