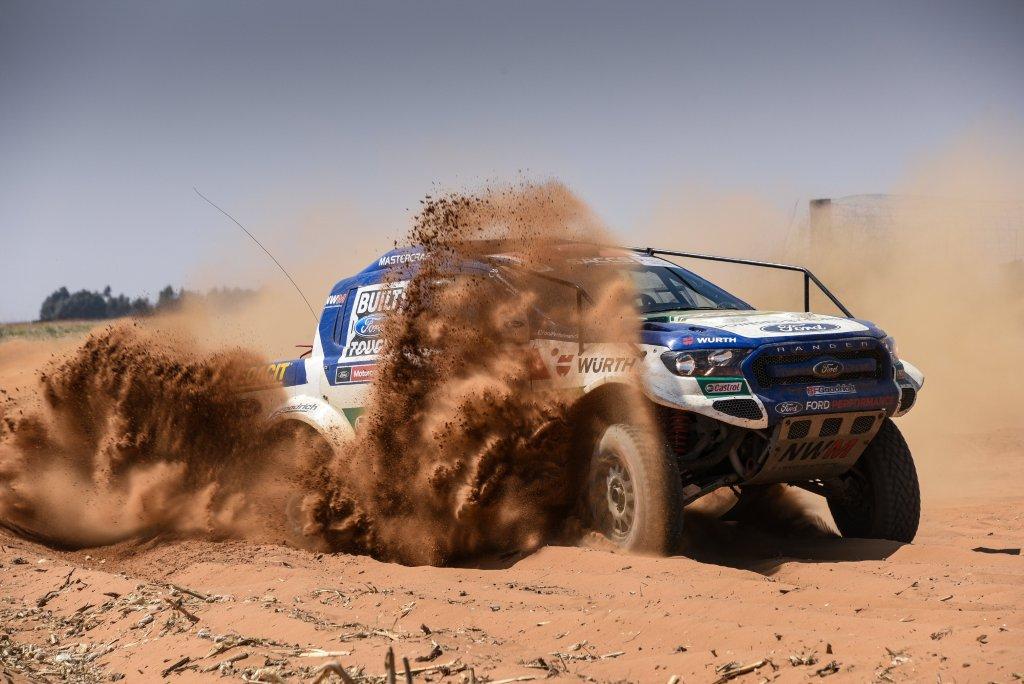 Brian Joss – The Ford Castrol Cross Country Team emerged with a solid tally of championship points after a dry and dusty but thrilling Total Agri 400, staged at NAMPO Park near Bothaville in the Free State over the weekend (18 and 19 September).

As a new event on the South African Cross Country Series (SACCS) calendar, it turned out to be a firm favourite for the crews, who revelled in its challenging and varied terrain – from fast, flowing farmlands to desert-like soft sand and tight sections through dense bush.

For the two Neil Woolridge Motorsport (NWM) built and run Ford Rangers, it was a positive outing after the team made a raft of small but effective changes after a disappointing outing at the previous race.

Gareth Woolridge and Boyd Dreyer (#377) finished the 396km event in an impressive fourth place overall and in the FIA class, with team-mates Lance Woolridge and Elvéne Vonk (#334) crossing the line sixth.

The scene had been set for an exciting race during Friday’s short and intense 40km qualifying session, which Lance and Elvéne completed in a rapid 24min 08 sec, placing them fifth overall on the starting grid – with just 54 seconds separating them from the leaders. Gareth and Boyd ended the opening session in sixth place, just 9 seconds adrift of their team-mates.

The strong winds that had dominated Friday’s session had dissipated for Saturday’s main race, with clear but hot conditions resulting in the roar of high-powered pure-bred V8 engines echoing across the vast open and flat Free State landscape.

It was clear that everyone was on a charge from the moment the flag dropped on the opening 178km loop, but the running order changed significantly with several of the front-runners making navigational errors or encountering mechanical issues.

There were no such mistakes from Gareth and Boyd, though, and they entered the designated service park at the NAMPO complex in a superb third place overall – having thoroughly enjoyed the fantastic new route.

Lance and Elvéne held station in fifth place, despite an exceptionally hard impact on a double caution jump, which they only saw at the last second while following in the dust of Gary Bertholdt and Geoff Minnitt in a long-running attempt to get past the Class T Toyota Hilux crew – which they later managed in the second half of the lap, as did their team-mates in their progress up the field.

Aside from minor front bodywork damage on the #334 Ranger, it was a hassle-free service stop for the Ford Castrol squad, and they headed into the second 178km loop with determination, driving their slightly modified Class T-based Rangers to the limit against a formidable line-up of full Dakar Rally-specification competitors in the FIA class.

The final loop was completed without incident, as Gareth and Boyd posted near-identical times for the two stints – separated by just 22 seconds. Their podium aspirations were unfortunately dashed as they were relegated to fourth place when the final times were calculated, missing out on third place by a scant 8 seconds to Shameer Variawa and Dennis Murphy (Toyota). Nevertheless, it was a hard-fought result they could be exceptionally proud of.

“We had a clean race without any problems, and the team did a fantastic job on our Ranger, as it felt like a different car with big improvements compared to the last race,” Gareth said. “Coming into this race I didn’t have very high hopes, as I thought it would be a fast maize-lands type race that doesn’t seem to suit our car, but there was a mix of fast and tight sections, including driving along the Vaal River. Boyd and I really enjoyed the race, and this is part of the recipe for doing well.”

Lance and Elvéne made the most of a clear run through the second loop and were almost two minutes faster than the first lap, but they ultimately had to settle for sixth place overall, just behind Giniel de Villiers and Juan Möhr (Toyota). “It was a nice event, but we were stuck in Gary’s dust for a long time on the first lap, and both Elvéne and I had sore necks after the hard landing,” Lance said. “The route was churned up heavily and quite bumpy on the second loop, which caused a lot of axle tramp on our solid rear axle Ranger, but we pushed very hard and made up time in the tight stuff, and I think we can be happy with our result.”

NWM team principal, Neil Woolridge added: “We were left scratching our heads after the Bronkhorstspruit race where we were off the pace, but we did a lot of work and testing on the suspension and set-up of the cars, and it definitely paid off. Our podium finish at the season-opener in Dullstroom showed that we are competitive in the tight and technical events with the current Ranger V8, and it’s encouraging that we were once again competing for a podium result at this race which had a wide variety of terrain. For what is essentially a Class T car to be doing as well as it is against the FIA cars is fantastic.

“Not only is the car better, but both of our crews have clearly upped their game and changed their style quite a bit, so it was a great weekend for us,” Woolridge said.

In the highly competitive Class T, NWM-supported privateers dominated the field in their Ford Ranger V8 entries, with Malcolm and Frans Kock taking the class win, and finishing an impressive 9 th overall in the final standings. Wors Prinsloo and Andre Vermeulen ended second in Class T, rounding out an impressive four NWM Ford Rangers in the top 10.

The next and final race of the season takes place in Parys in the Free State, on 23 and 24 October 2020.