Brian Joss – A full year after the Ctrack Freight Transport Index turned negative the recovery is now under way. The biggest decline for a moving quarter on a year ago was for the June 2020 quarter which saw a decline of 22,5%.

Currently the moving quarter decline in August compared to a year ago is 12,9%. This is still a reasonably large decline, however the decline in all sectors apart from pipelines is slowing, while Road and Sea freight are now only declining by single digits.

Encouragingly the Ctrack Freight transport index showed a 5% improvement between August and July. This is the second improvement and the first after the June recovery of 24% from May 2020.

However. on a quarter to quarter basis the Ctrack Freight Transport index increased with a very strong 8% as it includes part of that June monthly rebound.

A highlight is that the 8% increase between the quarter to August and the quarter to May is the first time in 13 months that the index is positive again and it is almost a certainty that the broader transport sector will contribute positively to growth of GDP in the third quarter.

“The announcement by President Cyril Ramaphosa that South Africa has moved to Level 1 of Lockdown regulations has meant a continued increase in business activities,” comments Hein Jordt, Managing Director of Ctrack SA.

“South Africa is ready to get back to work and at Ctrack we are ready to work with our customers to aid them in getting their business back to a level that they were before and beyond,” he adds.

The only sector that seems out of sync with the rest is the pipeline sector as nearly 200 days of less than usual motor car traffic has reduced the need for fuel. At the beginning of the pandemic this sector was also out of sync, as the need for petrol and jet fuel declined and tank storage space had to be found for these products in inland tanks, a factor that is still hampering fuel flows somewhat.

Overall, the Freight transport is on its way back but there is certainly a longer road back for Air freight and probably storage and warehousing. Inventory management is going to become a very important factor as many businesses try and survive. Surveys after major declines in GDP in the past have indicated that inventory management is viewed as a critical factor.

Graph 1. It still hurts in airfreight. 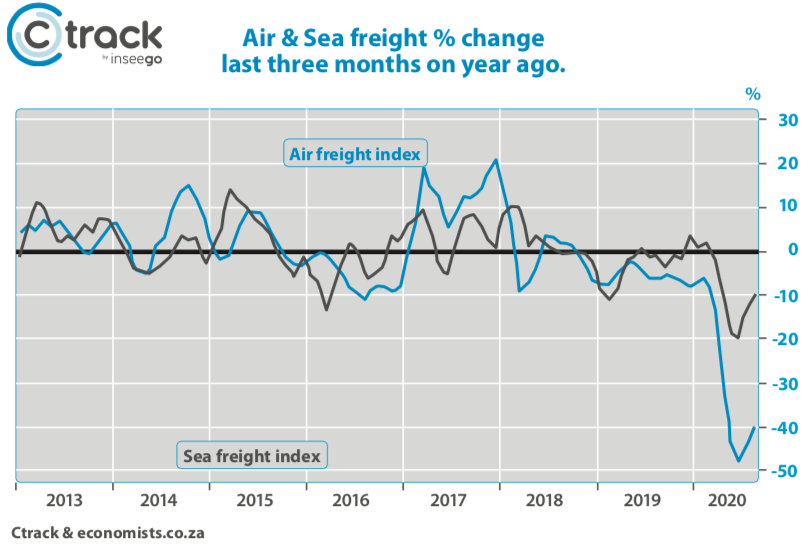 ‘We expect that Sea freight on the container side is still in a supply chain correction and here too some further volatility could be expected which will have a knock-on effect on road and rail on a smaller scale.

“Although the opening of borders is welcomed, delays for truckers is a cause for concern while rail say they have it easier at present,” Jordt said.

The Freight transport sector is making a massive comeback, but it now seems that it will be a two-speed recovery.

We have pointed out some serious problems, but we do expect that three of these six sectors will return to normal.

Air freight will take longer to recover as it relies on passenger flights to get going on a large scale again. International passenger traffic in countries like China and South Korea, who were of the first to suffer COVID-19 effects, is yet to return to 50% of passenger capacity. Given the slow recovery in passenger air travel, one should not expect a return to normal for at least another three quarters.

Secondly, in South Africa the work from home movement and social distancing will keep petrol consumption lower than before, as it is the fuel that most commuters use on a daily basis. 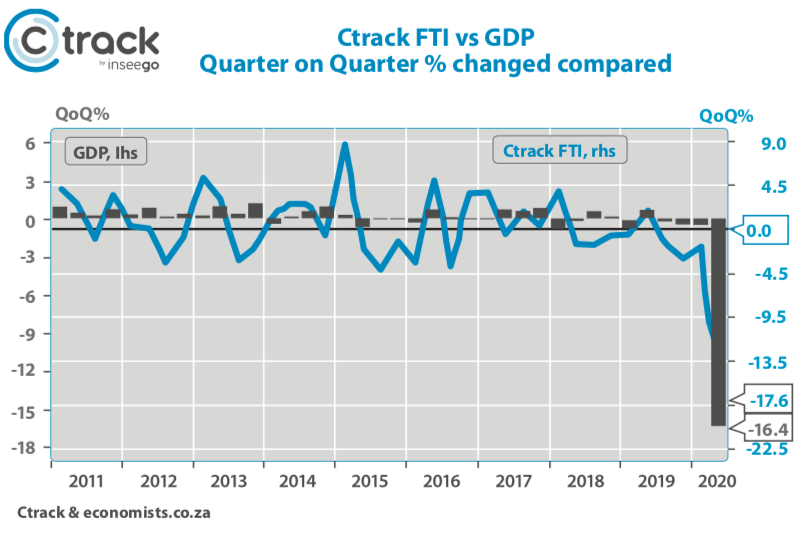 “Lastly, we expect that the warehousing sector will only boom at a later stage thanks to an increased move towards online shopping, however this will take a few quarters to reach full capacity as inventories will still take a while to recover. “

The road freight sector is recovering nicely, with a big driver being the parcel and courier sector. Coal will also grow while Eskom is struggling with transport via other modes.

General freight and containers will almost return to normal in the next few months although not the old normal.

Rail and sea freight on the bulk side have practically fully recovered but there will be a month or three of slower sea freight deliveries as port congestion all over the world is still a factor due to the COVID-19 disruptions.

The TEU volumes have also grown but will not reach normal until the SA consumer has recovered which may still be a year or two away.

Road, Rail and Sea freight will soon pass the 90% mark of the old normal but then the growth may slow a little.

It will still take a while for Air Freight to return to normal, but we expect it to rebound strongly and that it will become the growth industry of the future.

The Ctrack Freight Transport Index is also a very good indicator of GDP and while we are hesitant to make a judgement, we now expect at least a 30% growth in SA GDP for the third quarter, seasonally adjusted and annualised, so a 51% decline become a 30% plus increase. This is not a full recovery but at least SA is getting back on its feet, walking will happen later. 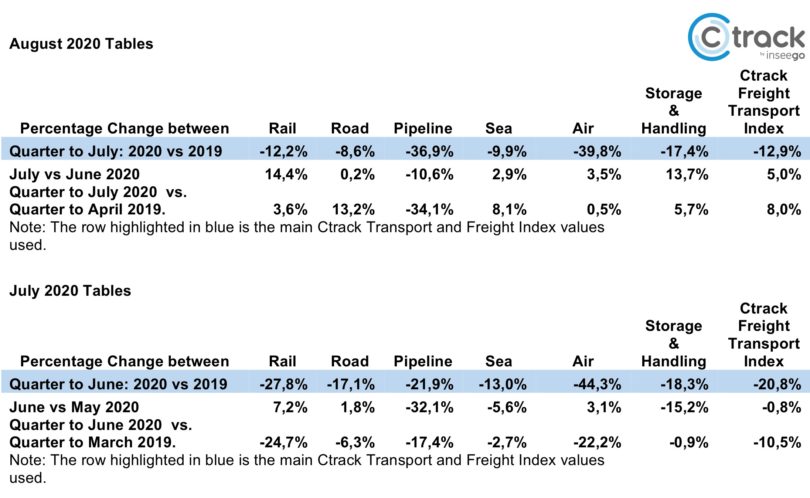 The Ctrack Logistics Barometer can be viewed online at www.ctrack.co.za