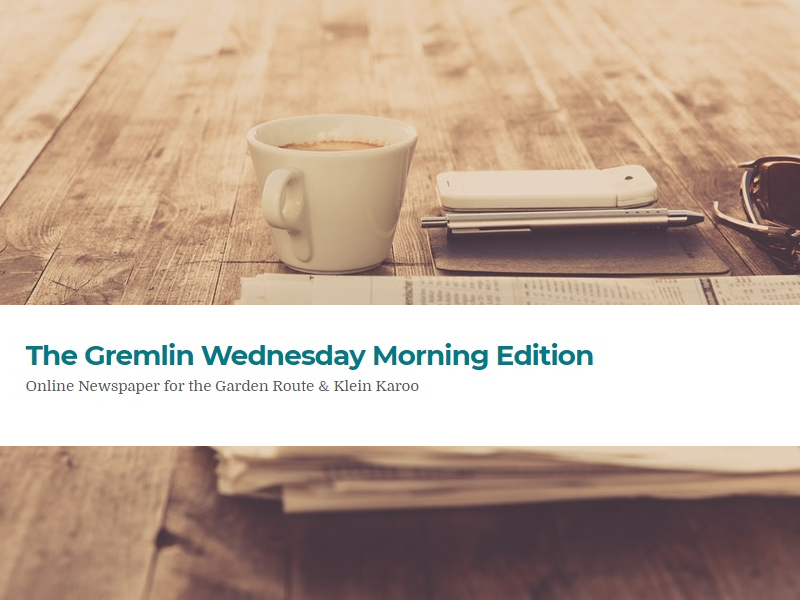 Garden Route & Klein Karoo celebrates World Tourism Day.  Please donate to a great cause.  This Friday the Lovely Brighitte Deister will be performing at Gapp Cafe at the Garden Route Mall.  Go George reinstates last of suspended routes.  A total of 143 trees were planted in the garden on the day in celebrating Arbor Week in George.  The Attacq Foundation launched the Food for Care programme this September.  Planned power outages: Portion of Conville, Portion of Modderrivier line, & Portions of Thembalethu.  NSRI assists man at The Heads.  Port of Mossel Bay promotes local tourism.  De Krans’ Pinotage Rosé: A wine for all palates.  The body of a man has been recovered from the Storms River.  Plett NSRI assist stricken vessel.  Meet award-winning film director Koos Roets in Plett.  Plett Diving News & Unbelievable Specials!

The US Presidential debates kicked off last night – my thoughts?  Trump did not have a good night and Biden was surprisingly good – which made the debate a lot more even than I had expected.  So, I guess who won is a matter of opinion.  Is Trump a bully?  Of course, he is.  But they are vying for the leadership of the Western world, so he was always going to come out swinging.  I’d take that over anything Biden has to offer any day.  If you think Trump is unpresidential, maybe it’s time to wake up to the fact that it requires a tough person to do a tough job.  Mail-in ballots remain the biggest bone of contention for me.  One must remember not to confuse absentee ballots and mail-in ballots.  Where a voter requests an absentee ballot because they won’t be in their voting district, or are unable to get to a polling station, is a perfectly legitimate form of voting – it’s been used forever.  But this unsolicited mass mailing of millions of ballots is ripe for misuse – and there is any amount of evidence to support this.  I almost feel that the Postal Services is deliberately dumping boxes of ballots all over the USA to prove a point.  There is a growing number of Democrats who realize this – hence Tulsi Gabbard’s Bill to stop it.  At least the Brits are getting Brexit done.

SAA has been grounded – is this the final chapter in this sorry story?  Mdluli and his gang get prison time and have their appeal rejected – one step closer to the ringleader?  Koeberg not concerned about the earthquake in the Cape.

The JSE slips ahead of the US Presidential debate – time will tell what the markets will think of the result – no news from the Asian markets yet.  Is the lockdown-induced financial crisis beginning to show?

Even Klopp is impressed by Liverpool’s early form.  Kevin Anderson certainly doesn’t want another 5-set marathon.  The Green & Gold teams prepare for Saturday’s encounter.  The Bulls, Stormers, Sharks, and Lions to become part of the PRO14.  The Cheetahs get bumped to the Super 8.  I think this is a great move – we’ll have almost all of our top players playing in the same league – which will make comparisons a lot easier when it comes to making selection decisions.  Not to speak of the jetlag from traveling to Australia/New Zealand.  We’re still not sure if the ‘Boks will play in the Rugby Championships.  We’re at a disadvantage having been off the field a lot longer, but if it goes well it would be fantastic preparation for the Lion’s tour.  But if it goes badly….  The sorry tale that was the EP Kings has finally ended.

Many people around the world celebrate the United Nations’ (UN) World Tourism Day, which is celebrated on 27 September each year.

In a few weeks, we are going to celebrate Christmas again.

Gapp Cafe at the Garden Route Mall invites you to join them every Friday Evening!

This Friday the Lovely Brighitte Deister will be performing at Gapp Cafe at the Garden Route Mall. Each Friday Gapp Cafe will showcase a different local artist.

With the recent implementation of Level 1 of the national lockdown, GO GEORGE will reinstate the last two routes that have been suspended during Covid-19 lockdown.

A total of 143 trees were planted in the garden on the day in celebrating Arbor Week in conjunction with the Department of Agriculture, Forestry and Fisheries (DAFF), as the custodian of forestry in South Africa, that is responsible for the campaign and more organisations.

The Attacq Foundation launched the Food for Care programme this September.

NSRI assists man at The Heads

A local man was assisted after he swam after the roof of his Day Cruiser Boat which was reportedly blown off the boat earlier on the lagoon.

This year, not only is the Garden Route International Film Festival (GRIFF) running a Virtual Online Festival with a series of insightful webinars alongside industry experts but it is also bringing the Drive-In Back to the Garden Route.

[Mossel Bay, South Africa, 28 September 2020] September sees the commemoration of Tourism Month, which provides a heightened focus on the importance of the sector to the South African economy.

De Krans’ Pinotage Rosé: A wine for all palates

Rosé as a wine style remains one of the most popular currently in the wine industry, appealing to a diverse market, with no predictions of it slowing down in the near future.

KNYSNA, South Africa, 25 September 2020 – We are disappointed to announce that the opening of the competitor entry process for the 2021 Simola Hillclimb has had to be delayed due to the prevailing uncertainty around COVID-19 regulations.

South Western Districts Cricket has announced its provincial fixtures for the 2020/21 season.  Due to the impact of Covid-19 the provincial season will only commence in January 2021.

Bickering and insults as first US presidential debate descends into chaos

US President Donald Trump and former vice-president Joe Biden hurled insults and repeatedly interrupted each other in their first debate, sparring over topics ranging from health care to the economy and their families as moderator Chris Wallace tried mostly in vain to control the conversation.

Rep. Tulsi Gabbard (D-HI), who co-sponsored a bill with Rep. Rodney Davis (R-IL) that would withhold federal funds from states that allow a third party to collect ballots from voters, said Monday the Project Veritas video investigation into the practice in Minneapolis is “further evidence” Congress should act.

A bill giving the UK the power to override parts of the EU deal passes with a majority of 84.

The business rescue practitioners for SAA have taken a decision to suspend all the airline’s operations with immediate effect.

The High Court in Johannesburg has dismissed former Crime Intelligence boss, Richard Mdluli and his co-accused, Mthembeni Mthunzi’s, applications for leave to appeal their convictions and sentences. Mdluli and Mthunzi were each sentenced to five years imprisonment, respectively, earlier today.

Last week’s tremor has anti-nuclear campaigners questioning the safety of Koeberg, although the nuclear facility said the plant is designed to sustain a magnitude-seven earthquake

The local bourse tracked global markets ahead of the debate, the outcome of which is expected to affect market sentiment

How to protect your business assets in times of load shedding September 29, 2020

Businesses are faced with intermittent load shedding and they need to ensure that they always take the necessary measures to safeguard their assets in the event of power interruptions.

Goals from Sadio Mane, Andy Robertson and Diogo Jota saw off the Gunners, who had won their opening two league games of the season.

Springboks get back to work ahead of Saturday’s showdown September 29, 2020

Two 25 man squads are starting to acclimatise to being back in the Springbok set up ahead of the Boks showdown at Newlands in Cape Town on Saturday.

The Springbok Green and Gold squads are in Cape Town all masked up as they begin preparations for the Castle Lager Springbok showdown at Newlands on Saturday.

The Bulls, Stormers, Sharks and Lions to become part of the PRO14.  The move means that the Cheetahs will miss out on a spot in the proposed PRO 16 competition, but in a statement the Free State franchise has negotiated its participation as a fifth franchise in a Super 8 competition.

Boks at a disadvantage in Rugby Championship, says Vermeulen September 29, 2020

The Eastern Cape is faced with another failed attempt of creating an elite rugby team in the province.

Tryn reopens at Steenberg for dinner on Fridays and Saturdays

Cool climate Constantia Glen Sauvignon Blanc is made for summer

Wit Kasteel’s second single, HERINNERING, will definitely lure you to the dance floor!

Suffering from lockdown blues and chomping at the bit to explore your ‘neighbourhood’? Franschhoek’s Mystery Weekends – an all-inclusive winelands…

Lockdown has changed the way we buy cars!

Lockdown has affected every single South African – on so many levels. One of the most interesting impacts has been…

Caring for someone living with schizophrenia

People living with schizophrenia deserve to live a happy, fulfilled life. To do so, they often need assistance from caregivers.…

Brian Joss – A full year after the Ctrack Freight Transport Index turned negative the recovery is now under way.…

Time to open up the market

Over the last two years the South African Motor Body Repairers’ Association (SAMBRA), has been lobbying hard to remove restrictive…

Just like giving your house or property a good clean out at the turn of season, why not do the…

4 Secrets to looking and feeling younger

The secret to looking and feeling younger not only lies in eating healthily, but it’s also in your ability to…