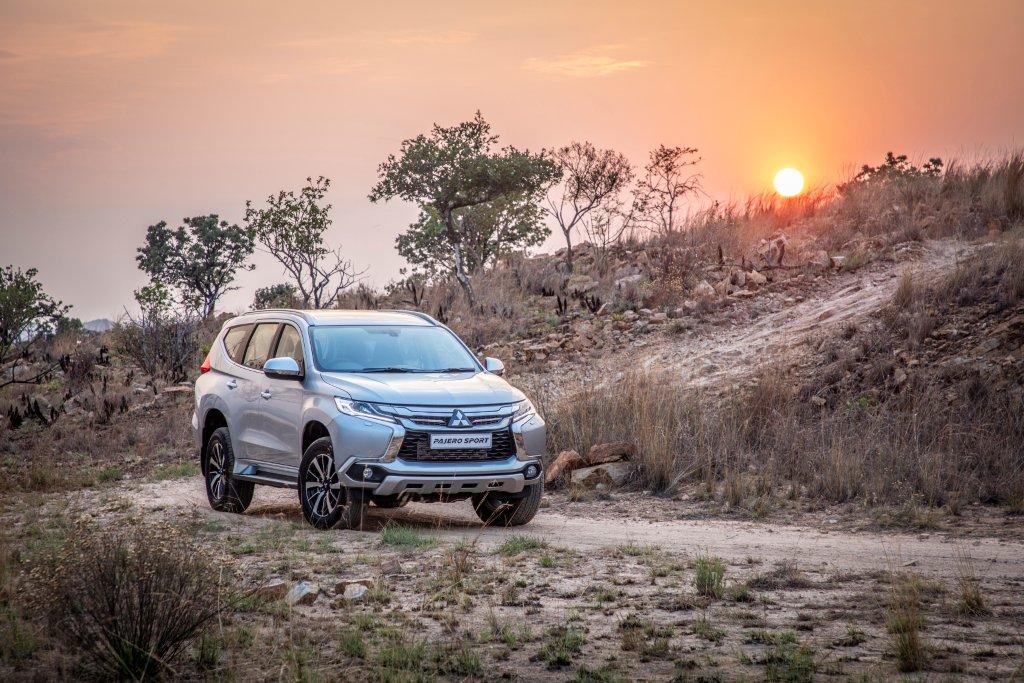 Brian Joss – More than 3.3 million people can’t be wrong: that’s how many have bought derivatives of the Mitsubishi Pajero since it was first launched in 1982.

It can also boast about being the most successful vehicle in the history of the Dakar Rally, with 12 wins, including seven consecutive victories, under its bonnet. Now the company has just updated the Pajero Sport: the changes are mainly cosmetic as it is still powered by Mitsubishi’s well-known 2.4-litre 4-cylinder turbodiesel Mivec engine which delivers 133 kW and 430 Nm of torque mated to the 8-speed automatic transmission. The flagship of the range is the  Exceed also fitted with an 8-speed automatic transmission as standard, across the range whether you choose the 4×2 rear-wheel-drive derivative, or the 4×4 Exceed There is a lot to like about the updated Pajero but after 38 years, even though it  has changed considerably, in my view it seems a bit long in the tooth, but it still has that spirit of adventure that cries out to be driven on the long and winding road.

But first some trivia: the Pajero was named after the pampas cat (leopardus pajeros), however, in Spanish-speaking countries, the Mitsubishi Pajero was changed to the Montero. In Spanish, pajero is a disparaging word that rhymes with tanker. Chevrolet also had a problem when it launched the Nova, which in Spanish no go (No Va).

But I digress,  Mitsubishi has been in the automotive industry since 1870 and in 1917 produced the Model A, Japan’s first passenger car.

Dubbed the Adventure SUV the seven-seater is based on the Triton bakkie. Nic Campbell, general manager of Mitsubishi Motors South Africa said the new Pajero Sport ticks all the boxes to become the “new hero” model. “Mitsubishi Motors is taking a new direction, focusing on growing market segments – and the new Pajero Sport is showing the way for our future,” Campbell said One of the most striking visual features of the new derivative is the Dynamic Shield front grille, giving the SUV a more modern look. Style is the name of the game and features include more luxury equipment. Inside, there is a tilt and telescopic adjustment for the steering column and a multi-function leather-covered steering wheel from where you can change the audio and cruise control settings.  Another change is a new full-colour digital instrument display, automatic dual-zone air-conditioning throughout the 7-seater cabin, including rear passenger controls, and electric windows all round. The new range offers Bluetooth with hands-free voice control, coupled to Mitsubishi’s advanced smartphone-link display audio (SDA) connected to a large eight inch touch screen. All models now have additional USB and additional accessory sockets (dual USB for the rear passengers) and a 220AC 150-Watt power plug with full leather throughout the interior.

Mitsubishi has introduced a powered tailgate with a hands-free feature. The company said a new  remote control feature will send a notification to your smartphone to lock the doors when the vehicle is left open.

The Pajero is an extremely capable off-roader, and according to Mitsubishi brand ambassador, Francois Rossouw, who regularly takes 4×4 drivers on seasonal adventure tours, said that  “I have driven everything with four-wheel drive, including previous versions of the Mitsubishi Pajero with its 12-victory Dakar history. It has always been a competent off-roader, but the latest 2.4L MIVEC Turbodiesel 8-speed A/T is nothing short from amazing.”  Returning from a seasonal 3 500 km round trip to the West Coast where he hosted 28 vehicles with 58 occupants, the Mitsubishi Pajero Sport Rossouw drove clocked 14 000 kilometres. Rossouw said he also hosted an outing to Moolmanshoek in the Free State in August, “where three earlier Pajero versions and a family in a Triton joined us on the Moolmanshoek trip, and three more Pajeros on the West Coast trip”. Rossouw had to recover “quite a few vehicles” with drivers mostly getting stuck in sand, none were Mitsubishis.

“It’s amazing in sand and on the tightest and most demanding off-road twists and turns, and on the routes where we used only high-range all-wheel drive, the average fuel consumption came to around 9l/100 km. If you consider that the vehicle was loaded to the brim with all our equipment, including two-way radios for each vehicle on the route, medical emergency equipment, our personal luggage, water, and food, this is astounding. On the technical side the Pajero is also the workhorse carrying tyre pumps and tyre repair kits.”

Here’s why the Pajero Sport is such a capable off-roader: it features Mitsubishi’s Super Select II 4WD system, which allows you to lock the centre diff and choose specific modes if you’re in high-range for gravel, mud or snow, sand and rock. In low ranger though,  if you lock the rear diff as well, you can’t choose the mode you want,  but according to some petrol heads it should get through anything.

I’ve driven several variations of the Pajero over the past two years or so and what hasn’t changed is its comfortable ride on the tarmac and the 2.4-litre 4-cylinder turbodiesel Mivec engine is no slouch. It easily keeps up with the fast  moving traffic on the motorways and it takes the ups and downs and turns through the mountain passes in its stride. The steering has a  positive feel and the Pajero’s nose goes where you want it to. The eight-speed automatic transmission is well suited to the turbo power plant and I could detect no hint of hunting or turboi lag as the gears shifted through the eight speeds.

In town too, despite its size, it was quite manoeuvreable in the jammed streets and it was easy to park thanks to the small turning circle of 5.6 metres.

Surprisingly, the Pajero is reasonably miserly with fuel. I recorded figures of 9l/100km on a varied route, which included a major traffic jam on the N1, in town driving and some time on the open road where it didn’t put a takkie wrong. The one drawback is its 68 litre fuel tank; its rivals like the Ford Everest and Toyota’s Fortuner can take 80 litres.

The Pajero Sport keeps its 7-seat layout. The second row, however, doesn’t slide forwards or backwards. The second row tumbles forward to allow the occupants to get access to the third row. The Pajero ranks high in terms of practicality. With the third row in place there is 131 litres of boot space which expands to 502 litres and when the second and back row are folded you get a cavernous 1 488 litres more than enough space for the kitchen sink.

It also has a hill-start assist system (HAS), dusk-sensing headlights, rain-sensing windscreen wipers, rear park distance control and a rear-view camera. A boon is the electrically folding sideview mirrors and electric windows, front and rear.

Meanwhile Mitsubishi Motors South Africa said this week that sales of the Pajero Sport derivatives, including the flagship Exceed, have increased for the third month in a row compared to pre-Covid numbers. Although overall industry sales are down from 49 140 in September 2019 to 37 403 in September 2020 – a decline of 23.9%  –  Mitsubishi Motors have increased its sales across the board.

“The new Pajero Sport, which was only introduced last month and available from September 17, proved extremely important to Mitsubishi Motors,” said Campbell. Other Mitsubishi models such as the Eclipse Cross and Triton have also increased sales compared to the previous three months thanks to special offers (0% deposit and low installment deals) across the range, Campbell noted.

The Pajero has always had its fans and though the changes on the new derivatives are cosmetic, it still offers the same reliability, better levels of luxury and refinement as well as a more than comfortable ride over tar. It is also a capable off-roader. There are two extra colours you can choose: White Diamond and Graphite Grey.