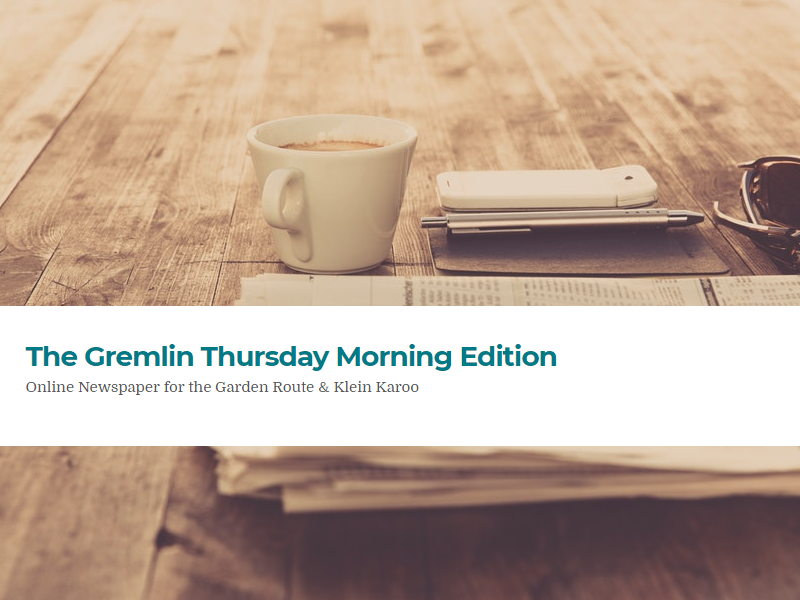 The SCLI is working with landowners to rehabilitate the rivers.  The George dam is not far from overflowing.  The drive-in is making a comeback.  George soup kitchens continue to feed those in need.  Visit Knysna announces Photo Competition winners.  Mossel Bay encourages tourists to escape.  Boplaas and De Krans continue to rake in the awards.  ADT recover a stolen bicycle in Plett.  Zinzi Restaurant wins a prestigious award.

Trump puts Pelosi in a corner yet again over the stimulus cheques.  All Nancy can do is dream of being president – and she’s not alone.  Ted Cruz nails the importance of the SCOTUS confirmation.  Trump does what Trump does – gets on with the job.

Is the tide turning against the real criminals in South Africa?

Even the JSE reacts positively to Trump ending the ‘stimulus talks’ circus.  Economic recovery is now a ‘priority’ for the cabinet.  Problem is, whatever they decide will not be implemented – the ANC simply doesn’t have the personnel to do so – they got rid of all the competent people along with Thabo Mbeki.  But Ramaphosa’s new deal seems like the same old mess rehashed.

The Stormers name 9 ‘Boks in their Super Rugby squad.  The Proteas women have a new-ball pair that is the envy of the world.  Young Lions want the Sharks game to be the beginning of a new era.  Tsitsipas through to the French Open semis.

“The rehabilitation of under-threat Southern Cape river systems by private landowners can provide the perfect environment for the creation of more wild spaces in the Garden Route,” says Cobus Meiring of the Southern Cape Landowner Initiative (SCLI).

Excitement is growing as the Garden Route Dam is filling up towards its new capacity following the raising of the dam wall and completion of its new spillway last December (2019).

The Little Karoo and Garden Route regions of the Western Cape have taken a trip down memory lane with the magic of the drive-in film festival.

The George Municipality continues to feed communities through its longstanding soup kitchens programme.

Visit Knysna is delighted to congratulate the winner of this year’s Visit Knysna Tourism Month Photo Challenge, Emma Rorke, who won herself a weekend getaway in the greater Knysna area that will also incorporate meal and activity vouchers.

The Great Escape to Mossel Bay

On the night of 24 March 1944, one of the largest and most daring escape attempts took place.

It’s the height of the competition season for the wine industry, and De Krans Wines in Calitzdorp is no stranger to bringing home sought after accolades. Confirmation that they are still regarded as South Africa’s leading producer of port-style wines.

A stolen bicycle was recently recovered by two armed response officers while they were doing patrols in Piesang Valley Road.

Now, more than ever, international recognition of tourism experiences is a reason to celebrate.

SAVE the DATE for our GOLF DAY 5 November 2020 and book your 4 Ball with us today!

Hours after demanding the cancellation of further negotiation on a wholesale coronavirus relief package until after the election, President Donald Trump signaled support for a second round of $1,200 stimulus checks to be paid to the American people.

Ted Cruz: ‘If the Supreme Court Is Divided Four-Four, There Is no Answer’ to Election Lawsuits

Sen. Ted Cuz (R-TX), author of One Vote Away: How a Single Supreme Court Seat Can Change History, highlighted the need for a ninth Supreme Court justice to avoid a four-four deadlock over expected election-related lawsuits after November 4, sharing his remarks on Tuesday’s edition of SiriusXM’s Breitbart News Daily with host Alex Marlow.

Behar to Pelosi: I’m Dreaming of the Day When We All Say ‘President Nancy Pelosi’

Co-host Joy Behar revealed one of her desires about House Speaker Nancy Pelosi (D-CA) on Wednesday’s broadcast of ABC’s “The View.”

President Trump returned to the Oval Office Wednesday after being released earlier this week from Walter Reed National Military Medical Center, where he had been treated for COVID-19.

Phillip Truter, the former chief financial officer of the defunct mutual bank who pleaded guilty to fraud and other charges, will work with authorities on how the alleged heist took place The post ‘Haunted’ VBS executive Truter sentenced to seven years appeared first on The Mail & Guardian.

State technology agency wins first battle in IT tender war, with court to hear rest of the matter on urgent basis

The all share firmed 1.01% and the top 40 1.09%, with banks, resources, platinum miners, industrials and financials all up on the day

Domestic travel is key to saving the tourism sector October 7, 2020

Staying ahead of the digital curve, including local communities in tourism offerings and promoting domestic tourism can help the ailing tourism sector survive and thrive

With COVID-19 having had devastating effects on the country’s economy, a virtual Cabinet Lekgotla is underway to discuss South Africa’s economic recovery plan.

PETER BRUCE: Ramaphosa’s New Deal has its roots in an old mess October 7, 2020

Unlike Roosevelt, our president is not facing a war, but an economy ravaged by years of ANC ineptitude

New-ball duo of Ismail and Kapp the envy of world cricket October 7, 2020

The new-ball duo of Shabnim Ismail and Marizanne Kapp are a fearsome unit with Ismail widely recognised as “the fastest bowler in the world”. Kapp, meanwhile, has routinely been ranked close to the very top on the ICC bowler’s list.

The men from Johannesburg also welcome back eight players who were part of the Springbok Showdown in Cape Town last weekend, including captain Elton Jantjies, Carlu Sadie, Marvin Orie and Vincent Tshituka.

Gold rush fever has taken hold at TOKARA, the prized Stellenbosch family owned wine and olive estate, after a Double…

In under a year, more than 5 million customers have signed up for the Checkers Xtra Savings rewards programme, making…

Durban, 18 September 2020: Today the world-renowned adventurer and humanitarian, Kingsley Holgate, set out with his son Ross on an…

Get cracking with Chef Kerry Kilpin on World Egg Day

Haylea Heyns is back with a new single titled ‘Blow Your Speakers’, a modern and effervescent love song to lift…

Survivor Pinotage is the pride of the Swartland

Survivor Pinotage, acclaimed flag bearer of this proudly South African grape variety, is the pride of the Swartland with two…

How can automation and AI bolster the fight against money laundering?

Brian Joss – More than 3.3 million people can’t be wrong: that’s how many have bought derivatives of the Mitsubishi…

Domestic staff members should be your partners in home security

What to do when strikers disrupt traffic

Brian Joss – A number of strikes are expected to disrupt traffic this week. As people resuming regular economic activities,…

October 5 to 9 is Customer Service Week, an annual observance which celebrates the importance of customer service and the…

Brian Joss – Hino, which has built up an amazing record for reliability and durability in the gruelling cross-country Dakar…

Brian Joss – It is a fascinating exercise to think of what October’s Transport Month would look like, were it…

For businesses to remain competitive, they need to innovate, adapt, motivate and encourage their employees to expand their skill set…