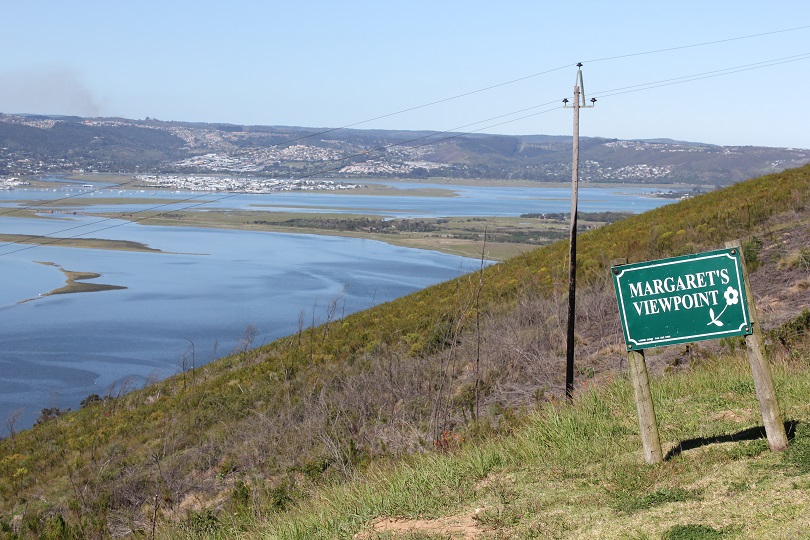 “Since the wildfire ripped through the area, landowners and land managers along the Knysna River did a great job in terms of environmental restoration,” says Cobus Meiring of the Southern Cape landowners Initiative (SCLI).

“In spring 2020, visitors to Knysna looking out over the Knysna lagoon and estuary from Margaret’s Viewpoint, on the road to Brenton-on-Sea, could be excused if they see little evidence of the 2017 wildfire disaster that destroyed almost the entire surrounding environment, including close to eight hundred dwellings and claiming several lives.”

“Knysna resident and landowner, Johan Labuschagne, as well as his neighbours below Margaret’s Viewpoint, has cleared and/or treated significant areas and prevented aggressive regrowth of invasive alien plants on their respective properties, particularly Rooikrans and Black Wattle. The neatly stacked dead trees amongst beautiful Fynbos and wildflowers on the landscape below Margaret’s Viewpoint are testimony to this,” says Meiring.

Labuschagne says controlling invasive alien plants on your land requires sustained commitment from landowners, but the results are well worth the effort. His property is classified and regulated as a highly protective area. On his land, invasive species like Long-leaved Wattle, Silver Wattle root sprouts, Rooikrans, Blackwood, and patches of Blue gum present major challenges. They have already completed two “chop and spray” treatments on new sprouts on the 27ha property. The estimated amount of 3-6 monthly sprouts/shoots treated are approximately 4 000 per ha.

Land surrounding the Knysna River was heavily infested with invasive alien plants pre-fire, and this contributed heavily to the severity of the wildfire, including allowing the fire to jump across the more than one kilometre-wide Knysna lagoon, contributing to the destruction of property and the environment all the way to the east to Plettenberg Bay.

“Besides the importance for landowners to become compliant in terms of enforced environmental management legislation regarding invasive alien plant management, the restoration of critically endangered biodiversity in Knysna as well as the entire Garden Route District, is vital to the future preservation of the region,” says Labuscagne.

SCLI assisted many landowners along the Knysna River with drawing up of fine-scale invasive alien plant control plans in order to assist them to be able to better manage their land and to do so within their means. The control plans and the training of landowners came at significant expense and technical input from SCLI.

The typical Invasive Alien Plant Control Plan (and there are several types, varying in quality and detail) gives the landowner an overview of problem areas on the land, the species of invasive alien plants on the land and their age. More importantly, the plan outlines how to address the invasive plants, and should allow the landowner to keep track of the progress made and methodology used in clearing and controlling invasive alien plants on their land.

Concludes Meiring, “The Knysna River, as well as the Goukamma and several other river systems in the Garden Route play a vital role as conservation corridors linking the Outeniqua Mountains with the Indian Ocean. The corridors are crucial to plant and animal migration and have an important bearing on both marine and terrestrial environmental well-being and sustainability.”

Photo: Margaret’s Viewpoint: Land below Margret’s Viewpoint on the road to Brenton-on-Sea has been cleared of invasive alien regrowth following the 2017 wildfire disaster, and today is testimony to the natural beauty of indigenous Fynbos and offering visitors an unobstructed view of the Knysna estuary. (Photo: Cobus Meiring)

SCLI is steering a project, the SCLI Cape Floristic Corridor Revival and Training Programme, as a regional initiative to improve efforts to enhance the survival of the Southern Cape floristic footprint. The project focuses on long-term landowner involvement in the eradication and control of invasive alien vegetation. It is a three-year project, aimed at entrenching the principle of corridor conservation objectives over time, and obtaining landowner commitment and support through the direct investment of the development of invasive alien plant control plans as well as training. The project entails the establishment of a network of north/south conservation corridors along selected river systems – Great Brak, Kaaimans, Touws, Knysna and Goukamma – in the Southern Cape.