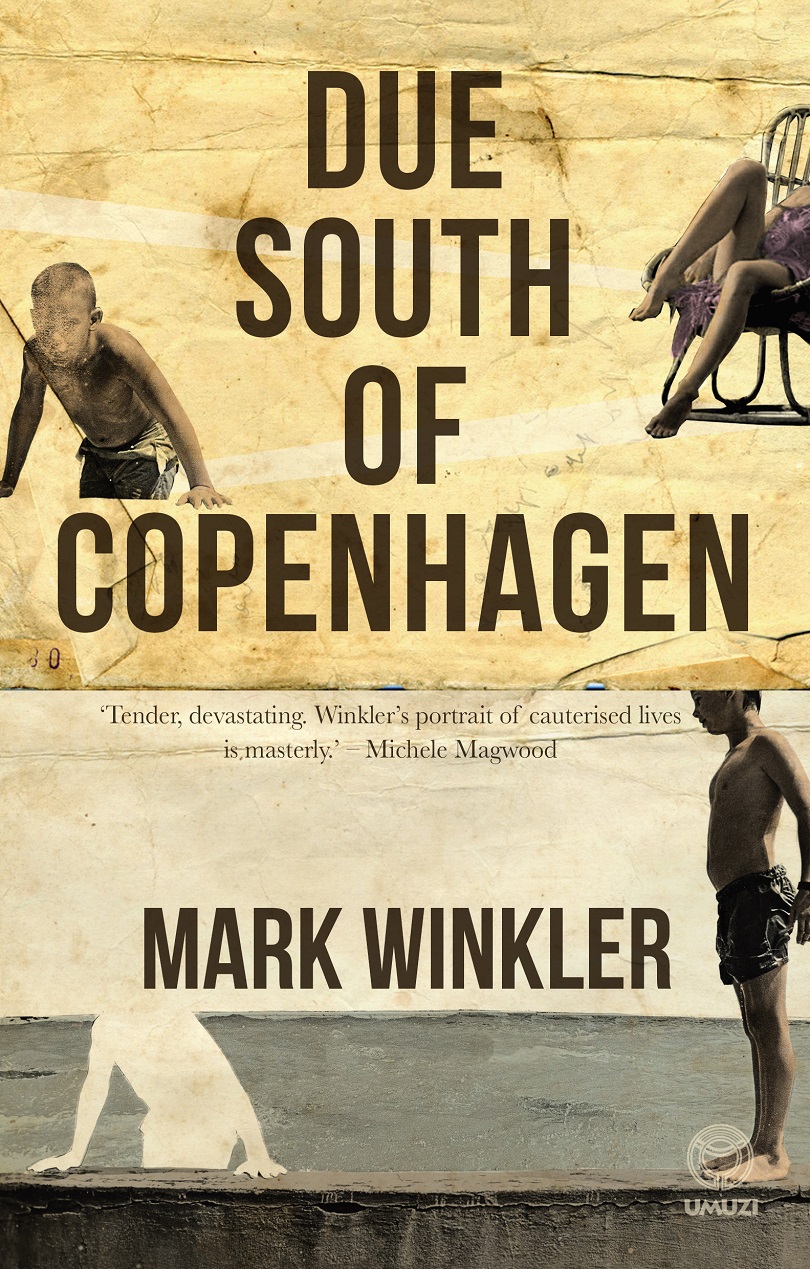 Mark Winkler has written five novels including Theo & Flora in 2018 (reviewed, November 28 2018) and though his books have been published worldwide in English and French and was short-listed for the Barry Ronge Sunday Times Fiction Prize, in South Africa he has flown beneath the radar. Which is a pity as he has a unique ability to get in to the skin of his characters, not to say their minds. Theo & Flora is evidence of his acute and accurate observations of the foibles of man. Winkler should be better recognised at home. Readers don’t know what they’re missing.

As with Theo & Flora, a love story that began when protagonist Charlie Wasserman sifted through a box of old and brittle letters to reconstruct the romance of Theo & Flora.

In Due South of Copenhagen, Maximillian “Max” Fritz is sitting in the editor’s office of the Lowveld Mirror, a small community newspaper, waiting to hand over to the new owners who are going to reincarnate it as a website, which will start conversations between readers and the paper, the new digital expert tells Max, which he thinks is bullshit.

While clearing out his credenza in 2018 Max finds an old photograph of himself giving a mock blowjob to a machine gun mounted on the prow of  a boat while he was on patrol with Platoon 1. At the time Max, like all white boys, teenagers really, was undergoing two years of compulsory military training  with the South African Defence Force. Max in the Navy was a Marine and based at Simon’s Town, a far cry from the dusty Lowveld town where he grew up and his parents, Willy and Jilly, who owned Fritz Auto. Already dilapidated, Fritz Auto became even more so when Shell opened a shiny new petrol station complete with a shop and a takeaway, Even though Willie Fritz was an excellent mechanic, out-of-towners would stop  there by mistake where they would be served by Samson while the Idiot would be sweeping the forecourt when he wasn’t gnawing at the broom handle. And The Dog would be curled up in the shade, watching the passing show.

When Max told Willie and Jilly he had received his call-up papers it didn’t seem to make much impression on them.

The training was arduous, mind-blowingly numbing and the troopies got their first taste of it on the train journey to Saldanha when one of them was caught smoking in the compartment. They were collectively punished for this transgression and were made to run up and down the carriage, do push-ups; burpees and squats, for whatever reason. This punishment was called opfoks and “they were mild compared to what was to come in the next two years”.

Due South follows two timelines that swing from the early 1980s to late 2018.

Max is growing up in the 80s; a bit shy and a bit of a loner and he writes the occasional story for the Lowveld Mirror. He gets bullied at school, notably by Hulk Vermaak, but when Max retaliates they broker a tacit peace agreement and tolerate each other’s company.  Whenever Max sees Lucinda Barlow, who has a relationship with Hulk,  he becomes tongue-tied and crosses the road to avoid talking to her.

The arrival of Karl Udengaard from Denmark,  the son of Ove and Gunna, who grow acres and acres of oranges and grapefruit, with a few mango trees at one end and pecan nuts at the other, changes the dynamics. One school day when Vermaak is bullying Max, Udengaard brains him with a hockey stick and for that the pair of them get six of the best.

They soon become friends and Karl the Spartan teaches Max to toughen up. Karl does this by punching trees until his knuckles bleed, so a boy then, with a lot of baggage. And Max has a crush on the sexy Mrs Udengaard, who is the only person able to calm Karl down when he has one of his tantrums, and Freja, a Danish cousin who visited the farm for a short while.

Over weekends Max mans the office at Fritz Auto where he discovers the joys of the party line and the many dirty secrets of the town’s populace. But he can’t tell anyone what he learns, not even Karl, then they’ll know he was eavesdropping.

Before the internet and cellphones most people in the small towns and on farms were connected to a party line. Few had the luxury of their own telephones and each person had their own call sign and this is how Max learnt of the death of Gunna Udengaard who was found floating in the farm’s bilharzia-infected dam. Or so the story goes. But for a variety of reasons Max doesn’t believe that’s what happened. Then Karl and his father Ove disappeared, back to Denmark, leaving it up to the lawyers to dispose of the assets.

Max didn’t see Karl again or Ove although he received a postcard from Freja informing him of Karl’s death by suicide, and with it a cryptic message saying she now lived in a village two days brisk walk due South of Copenhagen, or an hour by car, where she had practised as a vet since her graduation, but was now retired except for doing a few  locums, and running her tack shop.

A detective, Uncle Sarel, Jilly’s brother-in-law, heads up the investigation in to Gunna’s death, wraps it up in short order. Two farm workers are found guilty and taken to Pretoria Central where they hang for Gunna’s murder.

But it still rankles Max and the memories of that time come flooding back when he looks at that picture as does his compulsory military service.

There’s another death. News24.com reported in April 2018 that a makeshift grave had been discovered on the banks of the Culonga River, 150km north of the Namibian border, where Andries Human, had been buried by the locals who found him hanging from a tree. Which, as Winkler, notes, changed the fate of one of the protagonists.

Max’s depiction of his time as a conscript will resonate with many who fought a mindless war, fighting for a system they didn’t understand and Max, like most of the other members of Platoon 1, became more compliant and learnt to roll with the punches.

While patrolling Mpalila Island, a few kays from the dock of the Zambezi, they become friends with the Plaaslike Bevolking (PB) buying booze and weed from the villagers who are generally a benevolent bunch, attending to their vegetable patches and minding their own business. Until one night Platoon 1 thinks it is being attacked by terrorists. There’s a fusillade of gunfire, and a woman, a PB, is killed in the so-called attack. There is a half-hearted enquiry to apportion blame.

There are many incidents, one, when a troopie floods the Simon’s Town base with End the Conscription leaflets. Max and Brendan Lock were blamed and for their “crime” were confined to barracks for six months, just as they were about to “klaar uit”.’

Uncle Sarel makes a deathbed confession to Max and he and Lucinda, now a nurse, have an unsatisfactory relationship although they remain friends.

Winkler’s characterisations are brilliant: even The Dog (with no name) is an integral part of the story, who dies while Max is away fighting for his country; you can just picture Samson the pump attendant getting off his oil can seat to attend to a customer; the Idiot is another strong character, who cries when Max tells him Gunna is dead, although he doesn’t know why he is crying. We all know someone like Manny “the Porra” who has his shop opposite Fritz Auto and allows Max to read the used paperbacks he sells as long as he returns them in the same condition. The Lowveld town is also part of the story, not just some piece added as an afterthought.  Winkler’s description of military life will make you shout out: “I know, that’s what happened to me. I remember the opfoks. I was there.”

When Lucinda arrives at the office to tell him Sarel has gone, Max tells her he is going to Denmark. “She stood and said, “Okay Max’, and ‘I stood too and said, ‘Okay, Lucinda,’ and she pecked me on the cheek and then she turned and walked off, Lucinda did’.

A simple statement that speaks volumes about an exceptional novel.

Put Due South of Copenhagen on your bucket list of books, and read it, even  if it’s the only book you read this year.