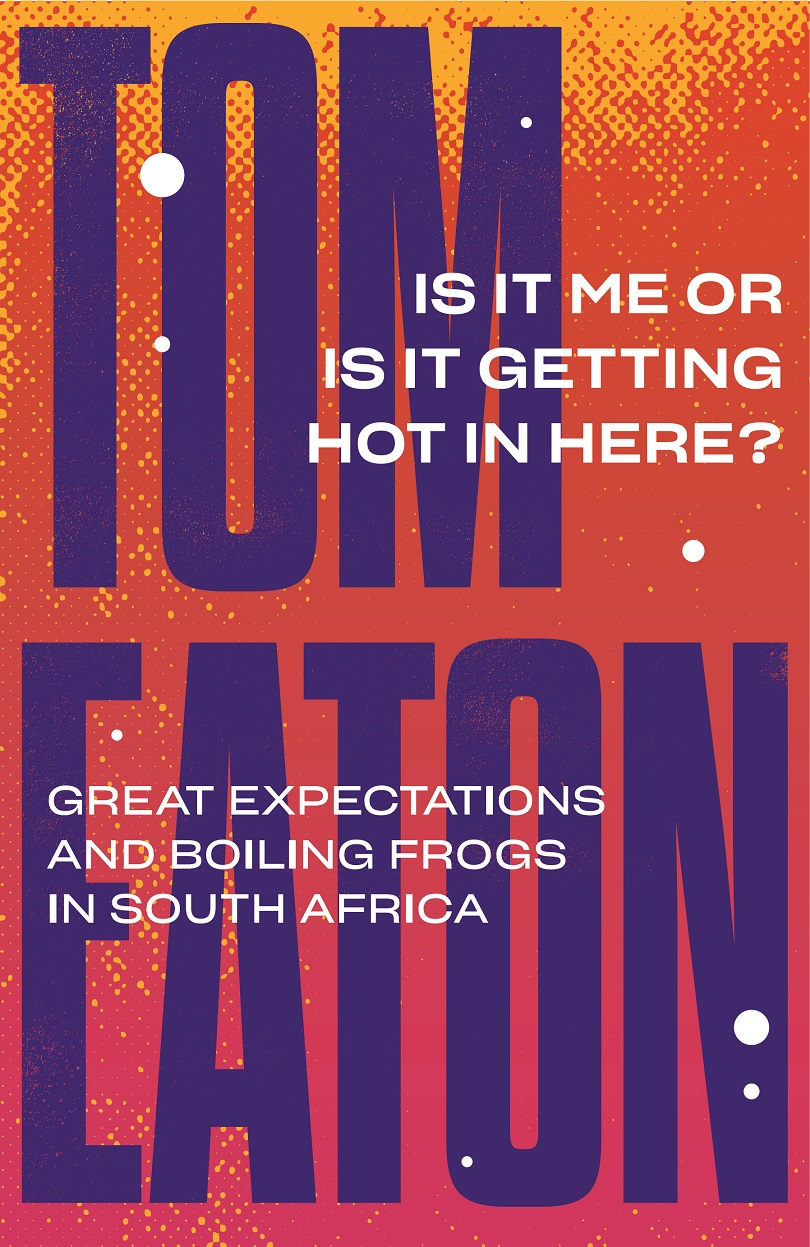 The fable about putting a frog in to a pot of boiling water, that it will jump right out when it gets too hot  — is just that — a myth. If you put the frog in a pot of tepid water it will happily allow itself to be quietly boiled is yet another fable. As soon as the water gets too hot the frog will try to jump out, and probably severely injure itself.

Eaton, a satirist of note, has focused his razor-sharp scalpel and his wit on analysing the South African condition. Eaton writes that the parable is the “dramatic metaphor for South Africans who live in this anxious, angry, unjust country where every day the dial is cranked up by another degree with the latest corruption scandal, the latest monstrous crime, the latest depressing, numbing statistic about how our country and economy are fading.

Early on Eaton describes how in 1996, the then health minister, Nkosazana Dlamini-Zuma squandered R14 million (today about R50 million) on the disastrous Serafina, spending almost the 20 % of the health budget on a play scripted by playwright Mbongeni Ngema about HIV/AIDS.

The story made national and international headlines and Cyril Ramaphosa, widely touted as Nelson Mandela’s successor told the New York Times: “We are highly conscious of the damage corruption does to a country”.

Now 23 years on Ramaphosa is still singing from the same song sheet: this while State Capture looted between R100 million and R14 trillion from the fiscus over 10 years.

And the only one who sounds surprised is Ramaphosa who in October 2019, told investors at the Financial Times Africa Summit in London that State Capture had stolen about R500 million. According to Eaton the R50 million spent on Sarafina 2 an amount that was considered outrageous then, is trifling compared to the State Capture free-for all. “We’ve experienced a Sarafina 2 every nine hours almost three times a day for nearly 10 years”.

Although the frog fable is a myth and proved to be so by a German scientist, Friedrich Leopold Goltz, there is a ryder. The frogs that were boiled to death, didn’t have brains because Goltz had removed them before the experiment.

Somewhere in that metaphor there’s a message for South Africans.

Eaton doesn’t only look at South African politicians. There are others like King Mswati of eSwatini (Swaziland)  who was celebrating the country’s jubilee and his 50th birthday and he gave the nation a gift befitting the occasion: an Airbus A340 and a high-tech hangar to keep it —  all for a cool R2.7 billion — and this in a country where 40% of the adult population are stunted by malnutrition, and in which 60% live below the poverty line.

Publishing also comes under the spotlight including Eaton’s own experience when he wrote the De Villiers Code, his version of the best-selling Da Vinci Code in which he was accused of plagiarism and he relates the story in a self-deprecating way.

Tom Eaton takes a detour to the world of sport and he unveils the “secret language of sportsmen” and an imaginary interview at a press conference with the legendary West Indian cricketing great, Brian Lara.

Eaton’s view on South Africa and life, is, to put it mildly, unusual. His take on the death penalty won’t make you laugh but it will give you plenty of food for thought. He cites the murder of UCT student Uyinene Mrwetyana  which stirred up outrage and renewed calls for the reinstatement of the death penalty, in particular, violent crimes against women, and he explains why the ANC government won’t bring it back.  He draws an interesting analogy that “Trekkies” , fans of Star Trek, will appreciate.

In the final chapter Eaton refers to the Rocky Horror Picture Show, especially Dr Frank-N-Furter who created a muscle-bound sex toy called Rocky, and when he introduces the toy to his guests, among them Brad and Janet, who tells him she doesn’t like muscle-bound men, the good doctor says, “I didn’t make him for you.”

The message is that, even though he was wanting affirmation, ultimately, he made Rocky for himself.

In the same way that Julius Malema, in the early days of the Zuma administration, told supporters, “We are not calling for the slaughter of white people —  at least for now”. Eaton suggests it was a performance, not for the whites, but for his followers. According to Eaton, the last thing Malema wants is for this country to be wiped flat by a racial civil war. Who then would pay for his pointy shoes and his hedonistic lifestyle?

Is it Me Or Is It Getting Hot In Here? Is worth reading: It may just change your worldview.