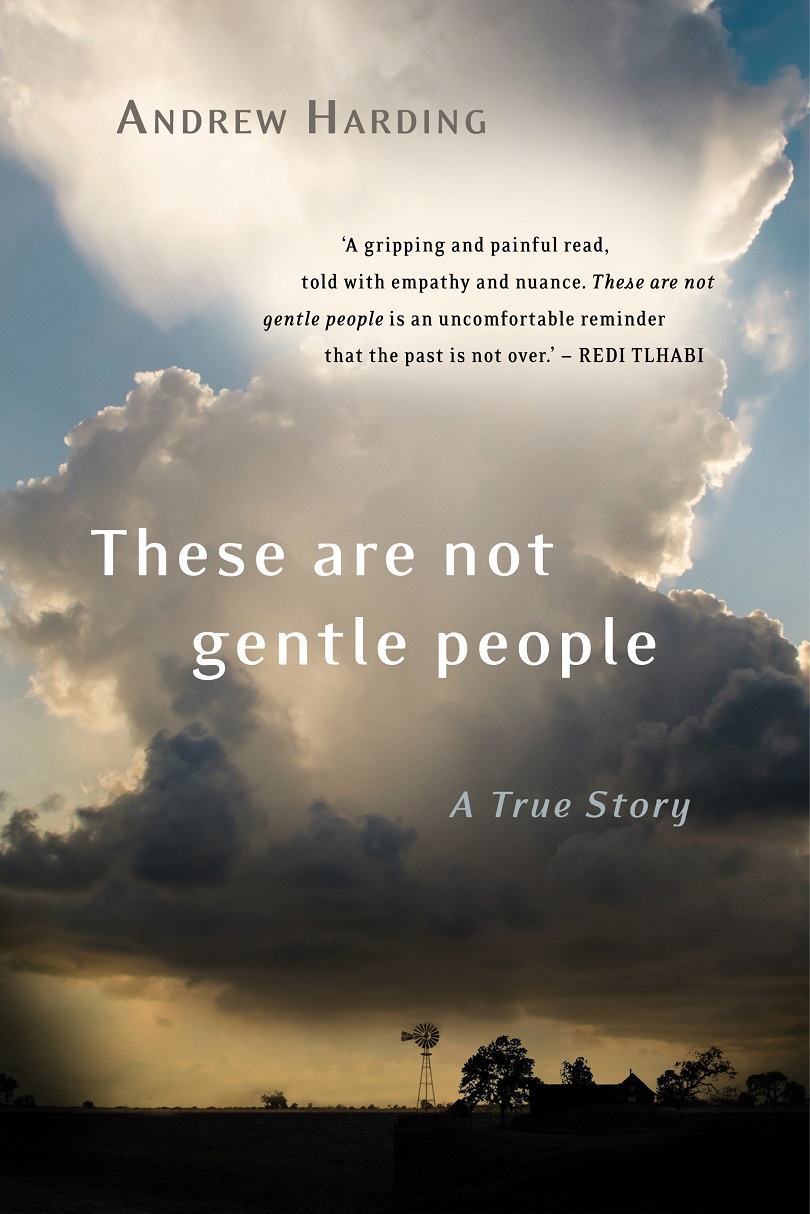 These Are Not Gentle People is a reconstruction of a brutal crime  in which the guilty go unpunished. It’s not a spoiler to say that as the trial of the people involved in the killing of two black men, Samuel Tjixa, 35,  and Simon Jubeba, 29,  made newspaper headlines. The two men were beaten to death on January 6 2016 after they allegedly tried to rob 73-year-old Lodewikus “Oom Loedie” van der Westhuizen of R20 000 at his Bulrush farm on the outskirts of Parys. The two men worked as casual labour for Van der Westhuizen and the dispute was over unpaid wages that Tjixa and Jubeba claimed he owed them. When he refused to pay them they hit him over the head with a gun before he pressed the panic button to alert his neighbours.

Tjixa and Jubeba fled on foot and were chased by between 40 and 60 vehicles driven by farmers who caught them in an isolated field about eight kilometres from Bulrush farm. The farmers brutally beat them and left them for dead in the back of a bakkie. The farmers are all related by blood or marriage. Van der Westhuizen’s son, Boeta and his cousin, Anton Loggenberg are accused of the murder and end up in the dock with their neighbours Stephanus and Johannes Cilliers as well as Captain Henk Prinsloo, a community police officer, who had just returned from sick leave when he was called to the scene and was charged with using a taser on the two men.

It took four years for the trial to reach its conclusion and in the end the accused were not convicted of murder but of assault with intent to do grievous bodily harm. However, the men’s lawyers doubted that they would serve even custodial sentences because of the weakness of the State’s case even as prosecutor, JJ Mlotshwa was considering appealing the verdict.

These Are Not Gentle People is a microcosm of what is wrong with the South African justice system. If it wasn’t so tragic it  could be called a comedy of errors.  Magistrate Leshni Pillay was forced to recuse herself, not least because she was Indian, but because of an assumed conflict of interest and that the prosecution demeaned her mercilessly. And the perception that she would take the farmers’ side.

Throughout the trial Tjixa and Jubeba were regarded as non-entities and were not referred to by their names. Instead they were identified as Unknown Male 1 and Unknown Male 2. The men and their families lived in Tumahole, a ramshackle township known to residents as the location. Until her son Samuel’s murder Ruth Qokotha worked on La Rochelle, the farm owned by Hector and Mercia Van der Westhuizen. The next day Ruth Qokotha quit, saying “I cannot work for the enemy”, because she believed Hector and Mercia had kept her son’s death a secret.

The families of the two men, Ruth Qokotha, Samuel’s mother, and Simon’s aunt, Selina Jubeba, were for the most part ignored during the court proceedings. “They were too poor to matter,” Harding notes, except for political expediency. It was also possible that the inexperienced pathologist, Dr Buang Lairi, did the autopsy on the wrong body. Which is probably why he missed the severe injuries on Unknown Male 2, sometimes described as “the shorter one” or the “taller one”.

The casualty ward doctor, Sifiso Nxumalo, who was on duty when the two men were admitted, confessed that mistakes may have been made. But it was the evidence given by forensic pathologist Professor Jan Botha, that blew the State’s case out of the water.

All the law enforcement agencies including the Hawks, led by Colonel Deon Topkin and Captain Francois Laux, were drawn in to the investigation and were determined to get a conviction even if it meant blurring the lines a little. Even if they were accused of intimidating the witnesses.

The case split the town of Parys apart and set family against family, and not only the white families, to the extent that some of them turned 204s, state witnesses, which meant they were immune from prosecution unless the Judge decided that they were not truthful.

The accused consulted some of the best legal brains including Barrie Roux, known for his involvement in the Oscar Pistorius case. The lawyers also gave them bad advice and one advised them to delete everything incriminating from their phones; and one father advised his son to say nothing, do nothing.

From a layman’s point of view, the Judge in the case, Corne Van Zyl, appears not to have weighed up the evidence properly  before making her findings.  Which gives rise to many questions: among them was her ruling motivated by politics?

Andrew Harding has written a superb book constructed from the raw material and from the interviews with many of the key players, These Are Not Gentle People is written as narrative non-fiction allowing everyone involved to tell the story from their own perspective.

Sadly, even in the new South Africa it’s an old story that gives the lie to the Rainbow Nation as espoused by Emeritus Archbishop Desmond Tutu. The true story that  Harding recounts will replicate itself in small towns, big cities and courtrooms all over the country, until we learn the lessons of the past. Which seems unlikely.

Despite Parys’s success as a tourist destination, beneath its welcoming façade it is a microcosm of South Africa today, Harding notes.

The book is especially relevant now in the light of events at Senekal where the authorities are determined to make the white farming community the scapegoat with police minister Bheki Cele leading the pack. Although a few days later he tempered his comments somewhat.