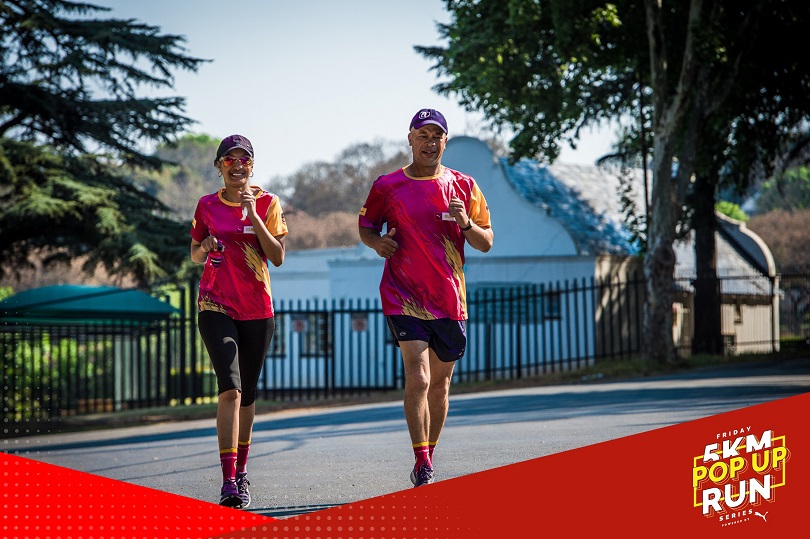 With the action of the Run Your City Series (RYCS) Heritage Day Virtual Run still top-of-mind, event organisers Stillwater Sports are continuing the excitement with the launch of the Friday 5K Pop Up Run Series powered by PUMA.

“The Heritage Day Virtual Run was extremely well received.  So much so that we have been inundated with requests for another event,” says Michael Meyer, Managing Director of Stillwater Sports.  “We like to try new things and for that reason we are excited to launch the Friday 5K Pop Up Run Series powered by PUMA.  The Series will consist of four bi-weekly 5km runs that will start and finish at a designated venue in Cape Town, Durban and Johannesburg.  The venue location will be ‘released’ closer to each run.  Entry is free of charge, but runners do need to sign up as we are limiting each Pop-Up Run to 70 runners (per city) to adhere to Government Regulations.  The first 50 entries (per run and per city) will receive a limited-edition RYCS t-shirt.”

“Runners who complete all four runs stand a chance to win their share in spectacular sponsor prizes,” continues Meyer.  “For a touch of flair each run will have a colour theme with the event t-shirt correlating with that theme.  Runners who take part in all four runs will receive a RYCS medal and headscarf after the final run.  If a runner cannot make it to the designated venue or if we reach capacity, he/she is welcome to take part virtually.  In other words, they can run anywhere, take photographs and share them to social media.  They won’t receive the RYCS t-shirt, but they will be eligible to win sponsor prizes.  We invite all runners to join in on the fun at the Friday 5K Pop Up Run Series powered by PUMA.”

ENTRY is FREE OF CHARGE, but you do need to sign up via the following link:

Exciting Sponsor Prizes up for grabs:

Runners who complete all four runs stand a chance to win the following prizes per city:

How to be eligible to win:

Please remember to abide by all legal government regulations for exercise.

For further information on the Friday 5K Pop Up Run Series powered by PUMA visit https://runyourcityseries.com/ or email entries@thecapetown12.com, entries@durban10k.com or entries@joburg10k.com