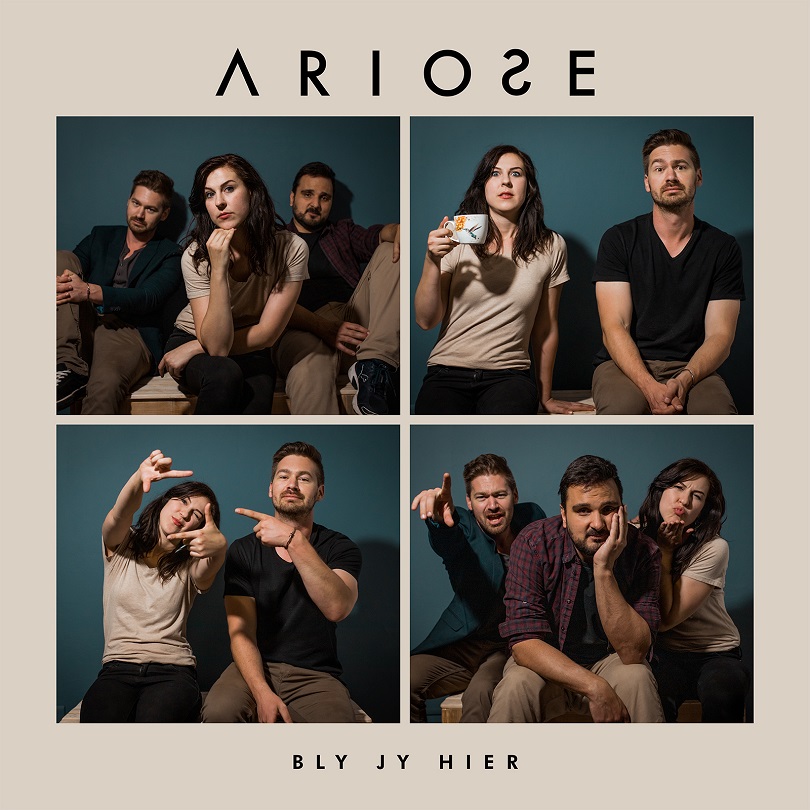 When musicians who have known each other for a long time decide to make music together, you can look forward to a remarkable end result… and BLY JY HIER is the perfect example to prove it.

It is a gripping contemporary duet by the brand-new Afrikaans group, Ariose (meaning – “a melody”)– which consists of Xander Filmalter, Renier Henning and Heidi Henning – and can be described as a conversation between a couple trapped on opposite sides of the same circle.

“BLY JY HIER is about those difficult times in every relationship that leave couples feeling isolated from one another, even though they are closer than their inner world allows them to experience in that moment,” explains Xander, who wrote the song. “It is not meant to be experienced only as a sad theme, but rather as a message of hope that victory can be achieved in difficult times. The melody creates a light foundation on which the interplay between the two characters take place and the different emotions are also evident in the lyrics.”

Ariose is a passion project that was established in October 2020 to create high quality Afrikaans music and also to separate the artists’ existing music careers from this new initiative. “Ariose’s goal is to make good Afrikaans music. Our music is written and created with an acoustic guitar and during production other elements are added such as electric guitar or piano,” says Renier.

The music video of the single was produced by Xander and Renier during level three of lockdown. The video was filmed at Heidi and Renier’s house and shows different shots of the group performing the song. Xander’s serious performance is in sharp contrast with Heidi’s fun and energetic style, which represents the two sides of the relationship circle that is one of the main themes of the song.

“Because of lockdown, we were not allowed to go out to film the video. We shot it at home one Saturday afternoon,” the guys reveal. “Initially we wanted to use a humorous theme, but the performance shots worked so well that everything just fell into place. We are very grateful for the energy that Heidi brought to the video, which we did not necessarily have.”

Xander and Renier have been friends for many years. Xander has also recorded quite a few of his songs at Renier’s studio. After Heidi and Renier got married and she started spending more time with them in studio, they realized that Xander and Heidi’s voices compliment each other very well.

“Xander and Heidi did a cover of the Bryan Adams hit, Star, for fun and the reaction was very positive. So, we have been talking about collaborating for many years, but we have always been too busy. At the beginning of 2020, we decided that it was now or never. Xander was looking for the opportunity to focus on his singing without having to worry about playing instruments and I agreed to handle that part of the project,” Renier explains. “Heidi has done backing vocals for Xander in the past and I have always felt that their voices work well together. So, we decided to give the duet a go and it turned out very well.”

According to the group, they really enjoyed working together on BLY JY HIER and are looking forward to sharing it with fans. “Because we are all such good friends and have always enjoyed making music together, the recording process was effortless,” says Heidi. “We all understand and support each other very well and bring unique characteristics to the table.”

THE PEOPLE BEHIND THE MUSIC

Pieter Filmalter, better known as Xander Filmalter, grew up in the Vaal Triangle and played in bands since he was seventeen. He used to make up new lyrics for existing melodies, until he saw one of his friends playing guitar at a school concert. He immediately fell in love with the instrument and taught himself to play on his grandfather’s guitar… in the same way in which he would later go on to teach others the same skill.

He has been working in the music industry for the past twenty-one-years and is the former lyricist and guitarist of the English rock band, AvenFall. The singer, who originally only did English songs, only decided to enter the Afrikaans Music Industry after a friend asked him to write a song. In 2017 he released his debut Afrikaans album, Hier Kom Dit Nou, which delivered numerous successful singles and music videos (that all featured on kykNET NOU!), including As Jy Dans, Bloed Is Rooi, Hi Jy and the title track, Hier Kom Dit Nou.

Xander describes himself as an introvert, who often needs some quiet time to recharge and think about life. Although he is happy with being a teacher, he dreams about writing songs for well-known artists and films, recording a few more albums and conquering the hearts of the South African public. He has recently recorded six new English songs and is excited about the future.

Renier and Heidi Henning have been performing together since 2014 as the gospel group, Kings Collective. Since then, the duo has shown that they are a force to be reckoned with – on stage and at home.

Together, they have performed at various churches and spiritual functions, released an English album – Humbly We Come – as well as several singles (Hold Me In Your Arms, Fountains Of My Heart, U Is Vir My and Kamerliedjie) and music videos that were all very well received and can still be seen on TV.

According to the couple, Ariose is definitely not the end of their gospel career and that it is merely a way for them to separate their secular and spiritual music. “Kings Collective still exists, and we will never stop making gospel music. It is part of who we are, and we still have a lot of new material on the way. We just wanted another name under which we could release songs that are not necessarily spiritual in nature,” Heidi shares.

Renier has been in love with music since he can remember and started playing instruments when he was twelve. Later he started producing his own songs and, over the past decade, this has also been his day job. It, therefore, comes as no surprise that the guitarist is responsible for the technical music aspects (composition, production and sound engineering) in the group. He loves watching Formula 1 racing in his spare time and enjoys a wide variety of music. He credits Goo Goo Dolls, Keith Urban, Imagine Dragons and Tim McGraw as some of his current favourite singers. The musician believes that people are moved when an artist is authentic and puts his soul into his music.

Heidi has been singing since she was a little girl and has always been a natural at writing poetry and lyrics. She taught herself to play guitar in high school and has been performing with bands since the age of sixteen. She decided to enter the Gospel market after being saved when she was twenty. As Kings Collective and Ariose’s female vocalist and lyricist, she draws inspiration from life experiences, her relationship with God, people and music. When she is not singing or working as a graphic designer, she enjoys gardening and listening to genres like Gospel, Country, Folk and Rock. She believes that music reveals more about an artist than anyone would ever know, and this is evident in the way she pours heart and soul into each song she sings.

Ariose considers BLY JY HIER to be the first of many songs together and is very excited to see how the listeners will react to this single. “We hope that the public will be experience the single in the spirit in which it was created. It addresses a universal theme, that will appeal to audiences of all ages,” Xander concludes.

The song is available on all digital platforms.