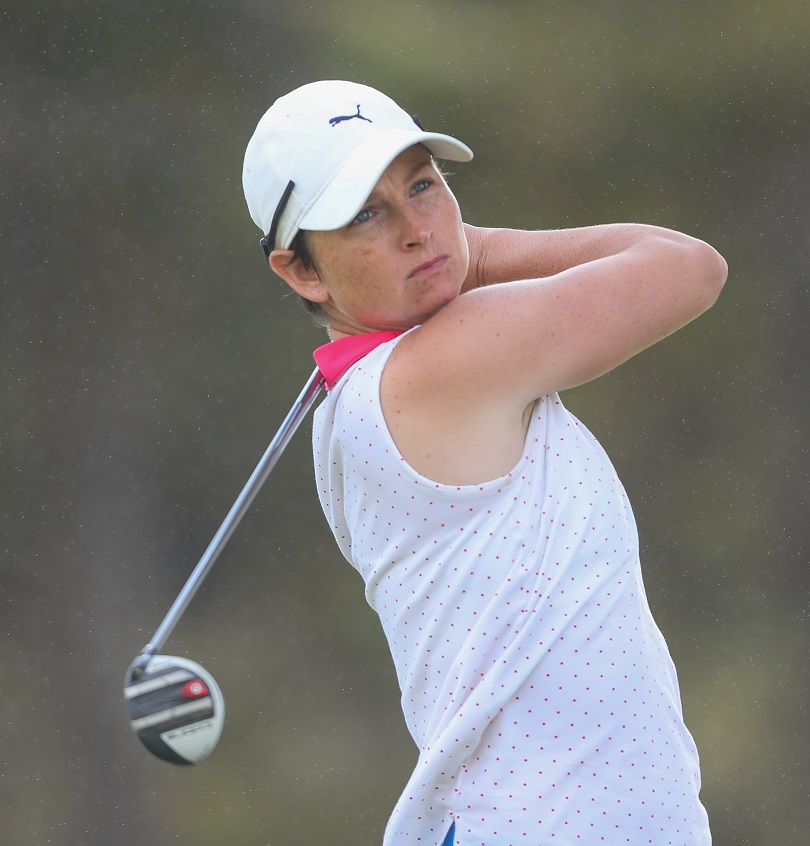 Grey fired two rare birdies on a wet Tuesday in the Cape Winelands for a two-over-par 74 that boosted the Durbanville golfer surge to second and within a shot of the defending champion on eight-over.

“I’m very pleased with how I played today,” said Grey. “I knew after the first round that I needed to come out and play solidly, because the conditions would be more challenging with the rain. It’s nice to get into the mix again, that’s why we’re here. We want to compete.

“I struck the ball better today and the putter definitely behaved better today. I had a lot of really close looks at birdie and both my birdie putts on five and 13 were both outside 10 foot and I rolled them nicely. That was really encouraging.

“Initially I didn’t really like this golf course but it’s definitely growing on me. It forces you to think and you need to play smart. You need to lay up cleverly and, although the rough is not that penal, it’s very lie dependent. I’m looking forward to the final round and going toe-to-toe with my Western Province Golf team-mate.”

Last year’s winner was pleased to have kept sole ownership of first place after a six-over in the tricky conditions.

“I still have a one shot lead, and I’m pretty happy with that,” said Traut, who won the 2019 edition on debut with a runaway five-shot victory at Selborne Park Golf Club.

“It was definitely a lot trickier out there today, with the wind up and the rain coming down. You have to hit the middle of the greens here to get the optimum roll out and when you’re hitting it short and it is low, it runs out too much. The greens are elevated and quite small, and I didn’t hit my irons as well as I did in the opening round. I missed a few greens and that led to some soft drops.

“I got a little frustrated, but I’m pleased to still be in the lead. A lot can happen with 18 to play to go and it should be a great challenge with Nina on my heels. I look forward to it.”

Heather Kruger from Country Club Johannesburg held on to the B-Division lead on 28-over, but she has company at the top after Pearl Valley’s Lizanne Heydenrych joined her at the summit with a round of 88.

“I was really surprised to find myself sharing the lead. After coming off the course soaked to the bone, that was a really welcome surprise,” the Boland Ladies Golf president said.

“The competition in the B-Division is absolutely fierce, and it’s all going to go down to the wire. There are three ladies within a shot of the lead and Phindo Mohlala from Modderfontein is still in the mix at 34-over.

“I’m really pleased to hear the golfers rave about the course. And I think it’s fantastic to see that we could still attract such a big field, given the challenges that we all faced with the lockdown.”

Louise Olivier from Devonvale kept command of the C-Division top spot and moved to 73 points with a second round 35.

However, the Devonvale golfer will have to stave off the challenges of Marialese Coetzee and fellow Devonvale golfer Dominique Provoyeur to clinch victory on debut. Coetzee from Oubaai posted the best round of the day and her 37 points to move into second on 69, while Provoyeur sits on 68 after signing for 33 points.

PHOTO – Durbanville amateur Nina Grey’s moved within a stroke of overnight leader Vicki Traut on eight-over in the second round of the South African Women’s Mid-Amateur Championship at Robertson Golf Club; credit GolfRSA.