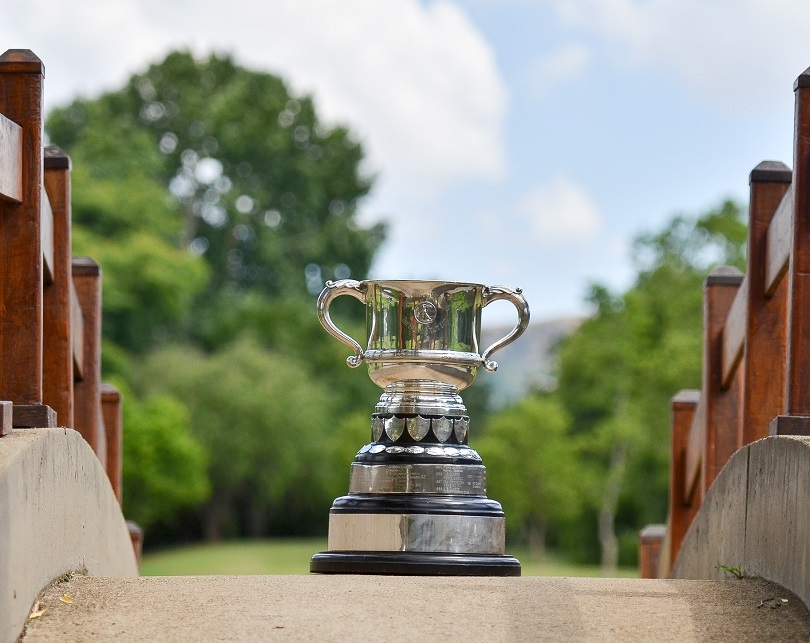 2 December 2020 – Eight amateurs will peg the ball up on day one of the 110th South African Open Championship at the Gary Player Country Club this week.

For most South African amateurs, competing in the SA Open alongside top professionals from across the world, the SA Open is the Holy Grail; the pinnacle of their careers.

This year, an exciting line-up that includes four past champions, world No 70 Dylan Frittelli and world No 40 Christiaan Bezuidenhout – the winner of last week’s Alfred Dunhill Championship – and a bevy of top European and Sunshine Tour challengers on this piece of prime South African real estate is an intoxicating cocktail.

And while the amateurs will not be eligible for any part of the R19 million on offer to those who make the 36-hole cut, there is more than just pride on the line in teeing it up in the world’s second oldest national championship.

The historic Freddie Tait Cup beckons for the highest-placed amateur who survives the cut and, after a disrupted golf season due to the nationwide Covid-19 lockdown, these eight young men need no further encouragement to step up to claim their place in SA Open folklore.

Leading the challenge is Casey Jarvis from State Mines, who already etched his name in the South African golfing record books this year.

Successive victories in the Free State and Gauteng North Opens early in the year cemented his billing as one of the country’s leading young stars and in February the world no 78 broke a 51-year-old record held by Dale Hayes to become the youngest winner of the South African Stroke Play Championship. At the age of 16 years, six months and 17 days Jarvis claimed a nine-stroke victory on 25-under 263, having fired rounds of 66, 65, 67 and 65 at Randpark Golf Club.

A week later, the Boksburg teenager sealed his spot in the SA Open with a comfortable 7&6 victory over Scotland’s James Wilson in the Aon SA Amateur Championship at Royal Johannesburg & Kensington and became only the seventh amateur to achieve the rare double since the SA Stroke Play separated from the SA Amateur in 1969.

De Beer, third on the Open Amateur rankings, goes into the SA Open on the back of four successive top-10s, including a runner-up finish in the EP Stroke Play.

Glendower’s Premlall, who made headlines in the 2018 SA Open at Randpark when he became the youngest amateur to qualify and make cut, at the age of 15 years and five months, sealed a hat-trick of titles in 2020 with his November wins in the Central Gauteng Open and Harry Oppenheimer Trophy. The in-form teen ranks fourth in the GolfRSA Open Amateur standings.

Christo Lamprecht, the 2017 SA Amateur champion, took time out in the 2019 season to focus on academics. After the George golfer scored seven distinctions in his matric final, he made a strong return in his second Junior Presidents Cup appearance. Lamprecht reached the quarter-final in the SA Amateur and won the Cape Province Open before the lockdown. Recent top-six finishes in the EP Stroke Play and Harry Oppenheimer Trophy boosted Lamprecht to sixth in the rankings and suggests that the Louis Oosthuizen Junior Golf Academy graduate is taking the winning form that earned him the 2018 East of Ireland Championship title into his fourth SA Open appearance.

Simpson made his debut on the International Team in the 2019 Junior Presidents Cup thanks to his his world ranking. The Bellville golfer lifted the Proudfoot Trophy as the winner of the SA Amateur qualifier, and backed up his EP Stroke Play win in November with a fourth place finish in the Silver Salver and a top 10 in the Harry Oppenheimer Trophy. He starts the week ranked seventh.

Christiaan Maas and Jordan Duminy – also members of the squad – and Massimo Mbetse, a South African attending the University of South Florida, booked their starts in the SA Open via the qualifying rounds, which saw nearly 300 hopefuls fight it out for 12 spots across three courses.

Maas, who has been in red-hot form since golf re-opened, fired an eight-under-par 64 to win ERPM qualifier by two shots.

Since September, the Pretoria Country Club golfer has racked up five titles. He won three times on the country’s golf development circuits (twice on the IGT Challenge Tour & a play-off triumph over Sunshine Tour campaigner Dylan Naidoo on the new Bushveld Tour) and picked up his second Bridge Fund Managers Junior Series and separated himself from the field in the Silver Salver in October. The 17-year-old Els for Autism ambassador celebrated a 12-shot victory on 27-under at Irene Country Club, which boosted Maas to 10th in the rankings.

Duminy and Mbetse both secured their berths at the world-class field at the Gary Player Country Club in a six-man play-off for four spots in the Modderfontein qualifier.

Like Lamprecht and Simpson, Duminy also did duty on the International Team in the 2019 Junior Presidents Cup. Later that year, he won Nomads SA Boys U-17 champion. He climbed to fifth in the GolfRSA Open Amateur standings in November following a play-off win in the Bobby Locke Invitational. The Louis Oosthuizen Junior Golf Academy member also claimed the Southern Cape Golf Union’s GolfRSA Race to 2021 after racking up victories in the Kingswood, Pinnacle Point and George Opens and finishing second in the Mossel Bay Open.

The potential surprise packet in this year’s amateur line-up is unheralded Mbetse.

The 21-year-old US-based golfer held the outright lead on seven-under at Modderfontein through 14 holes before he stumbled home with bogeys on 15 and 17 and a triple bogey finish for a two-under 70 that landed him in the play-off.

Mbetse learned his golf at the old King David Golf Club in Cape Town and when the family moved the United States eight years ago, he enrolled at the prestigious IMG Academy. As a junior, he won twice on the American Junior Golf Association circuit (Amino Vital and St Francisville Bluffs) and was named the Most Valuable Player at Saint Stephen’s Episcopal School. The third-year Business Marketing student was named Srixon / Cleveland Golf All-America Scholar and made the USF Athletics Honour Roll in 2020. He was also named to the ACC All-Academic Team this year. His best finish was a tie for 13th in the George Southern Individual Collegiate.

Mbetse spent the lockdown with his parents in South Africa and, just before the SA Open qualifier, he tied for sixth in the Bobby Locke Invitational at Parkview Golf Club.

The tight fairways, penal rough and lightning fast greens of the Gary Player Country Club promises a demanding week and one thing is certain – whichever amateur conquers this signature course deserves to join the former winners of the Freddie Tait Cup.

ABOUT THE FREDDIE TAIT CUP

The Freddie Tait Cup is awarded to the leading amateur in the South African Open Championship, providing he survives the 36-hole cut.

The prestigious trophy commemorates Lieutenant Freddie Guthrie Tait, a St Andrews young man who won the Amateur Championship in 1896 and 1897 and finished leading amateur in the Open six times.

The cup came into being in 1928 when surplus funds from a British Amateur Tour to South Africa that year allowed the touring contingent to purchase the trophy. It bears the R&A Club die and crest, and the medal die of the Army Golfing Society.

It was decided that the Freddie Tait Cup would be awarded to the best-placed amateur in the South African Open Championship and the first man to etch his place in such history was Bernard Wynne, who won the trophy at Royal Cape in 1929.

Since 1929, only eight amateur Freddie Tait Cup winners accomplished the rare double – winning the championship – and South African Major champion Bobby Locke was the only player to achieve this exceptional feat twice.

Locke lifted the Freddie Tait Cup alongside the Open trophy for the first time in 1935 at the age of 17, where his three-shot victory at Parkview Golf Club also earned him the distinction as the national Open’s youngest champion. His second double came in 1937 when he claimed a runaway 11 stroke victory at East London Golf Club.

Only 7 players have won the Freddie Tait Cup and subsequently lifted the SA Open title as professionals, with Dale Hayes the first in 1969 and Brendan Grace adding his name to this exclusive list in 2020.

The amateur to lift the Freddie Tait Cup was former SA No 1 and GolfRSA National Squad member Jayden Schaper with his tie for sixth in the 2020 SA Open at Randpark.

The prestigious Freddie Tait Cup, awarded to the leading amateur who makes the 36-hole cut in the South African Open Championship since 1929; credit GolfRSA.