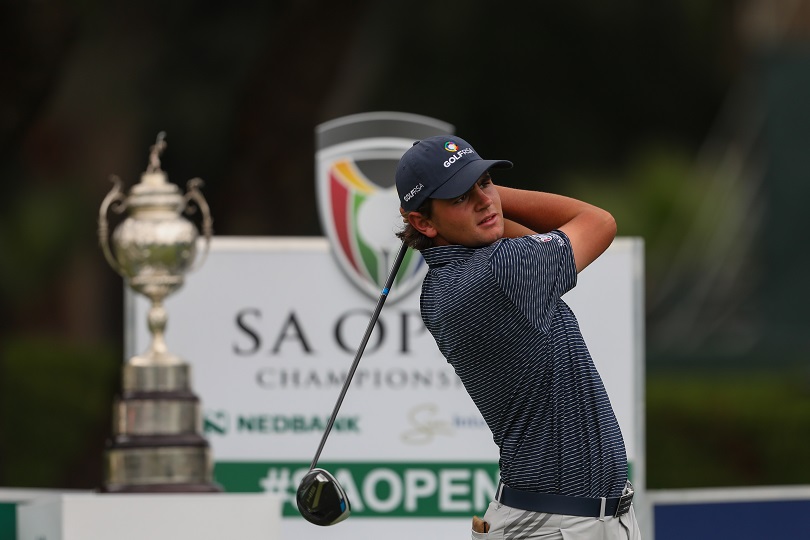 Lali Stander – SUN CITY, 4 December 2020 – South Africa’s No 1 ranked Casey Jarvis demonstrated once again why he is considered one of the future stars of the game when he etched his name in the annals of South African golf history at the South African Open Championship on Friday.

In a tension-fraught second round, Jarvis joined the elite club of two when he matched Bobby Locke and Neville Clarke with the rarest trifectas – winning the SA Amateur Championship, the SA Stroke Play Championship and the Freddie Tait Cup in a calendar year.

Walking off the course after what he described “as one of the toughest rounds of my career”, the 17-year-old Jarvis knew he was guaranteed to win the coveted trophy as the only amateur to survive the cut at the Gary Player Country Club.

He was stunned to learn that his bite-the-bullet two-over par 74 earned him this incredible distinction.

“What! I can’t believe it. That’s is huge. It will probably sink in on Sunday, though. Right now, all I can think about is how relieved I am that the round is over and that I managed to pull it through on the bubble,” declared the 17-year-old.

Locke swept the boards in 1935 – winning the Proudfoot Trophy as leading qualifier in the SA Amateur with rounds of 70 and 69, then defeating Frank Agg in a nail-biting final match at the 38th hole for the title. He then automatically won the Freddie Tait Cup as leading amateur and the youngest-ever SA Open champion at Parkview.

Clarke was the first player since Locke to bag the treble in 1988 when he closed out the amateur calendar double at Opppenheimer Park and won the Freddie Tait Cup at Durban Country Club.

Jarvis became the youngest winner of the SA Stroke Play in February at the age of 16 years, 6 months and 17 days when he eclipsed Dale Hayes’ 51-year record with a runaway nine-stroke victory on 25-under at Randpark Golf Club.

A week later he became just the seventh amateur to achieve the rare SA Amateur double and underlined his billing as the top amateur in the country when he routed Scotland’s James Wilson 7&6 in a weather-interrupted 36-hole final on the East Course at Royal Johannesburg & Kensington to lift the Aon SA Amateur title.

“It’s all a bit much to take in right now. I’m incredibly proud of this achievement. I didn’t win the Proudfoot Trophy, but I ticked off every other goal I had set myself,” said Jarvis.

“It was really two tough days. You play social rounds here or even amateur golf events, but nothing really prepares you for the set up in a co-sanctioned event. The first round, playing with Christiaan (Bezuidenhout) and Matthias (Schwab) was exciting and fun, but today was really tough.

“I am striking the ball better than ever and hitting everything so pure. I have rarely missed a green or a fairway and when I do, my chipping is great, but nothing is happening on the greens. I don’t know if it’s misreads or what, but the putts are just not dropping. It is so frustrating when you do all the right things and let yourself down on the greens.”

He squandered three shots on his outward loop to turn four-over and was feeling the pressure.

“I just did my best to stay patient and to keep doing the right things. I made six straight pars, missing some makeable putts, but then I hit a great iron into 16 and holed a 4-footer. Missed birdie chances on 17 and 18, but I guess pars was enough in the end,”

Knowing he crossed the last big hurdle of the 2020 season, Jarvis hopes to up the ante on the weekend.

“I don’t know that I can match Uncle Bobby Locke’s record and win this, but I am sure going to go out there and have some fun now that the pressure is off,” he said. “I did put pressure on myself to make the cut, especially after missing at the Alfred Dunhill Championship.

“There might have been a little fear that I couldn’t do it. Maybe I was a little tentative with the putter because of it, but that’s gone now. I am so stoked that I’ve done it. I’ve got my dad on the bag and the two of us are going to have some fun out there this weekend and I’m going to try and learn as much as I can from the pros. It’s all good now.”

Jarvis will have the benefit of playing alongside one of most experienced South African winners on moving day when he tees it up alongside European Tour champion and former Sunshine Tour winner Darren Fichardt.

While the Ekurhuleni teen could celebrate, fellow GolfRSA National Squad member Christiaan Maas was unlucky to finish on the wrong side of the cut at three-under. The Pretoria junior, who won the ERPM qualifier by two shots on eight-under 64, missed by one after rounds of 73 and 75.

The rest of the GolfRSA National Squad members who will miss out on the weekend action include former SA Amateur champion Christo Lamprecht (76-75), Jordan Duminy ((76-76), Yurav Premlall (75-77) and Sam Simpson (78-82), while Kyle de Beer was forced to withdraw after nine holes due to a hand injury.

Fellow South African Massimo Mbetse, who is based at the University of South Florida, improved five shots on his opening 80, but 75 in the second round was too little, too late to extend his first appearance in the SA Open.

PHOTO – GolfRSA National Squad member Casey Jarvis underlined his No 1 status when he won the Freddie Tait Cup as the only amateur to survive the cut in the SA Open Championship at the Gary Player Country Club; credit Carl Fourie / Sunshine Tour.