Brian Joss – Growth has slowed on the improving Freight Transport Index, but the upward yearly trend remains on course.

The overall Freight Transport sector still shows negative growth on a year on year basis, but far less so than in the last seven months. The Ctrack Freight Transport Index which measures the overall logistics sector in South Africa has remained dormant between September and October.

The Index recorded a year on year decline of -6.5% for the period that ended in October. However, the index was stagnant between October and September with a figure of -0,4%. As monthly data can still change slightly, Ctrack believes it is a small pause rather than a change in trend.

“It is a pity that the positive recovery following COVID-19 lockdown measures is now being affected by factors such as delays at border posts and violence aimed at truckers,” says Hein Jordt, Managing Director of Ctrack SA.

It is expected that the speed of the improvement will for the next two or three months be slower as capacity gets closer to previous levels. With the majority of the biggest decline now behind South Africa, other problems are unfortunately starting to emerge. Delays at borders are sometimes more than a week and during the last week of October the average delay for heavy trucks at the Beitbridge border post was close to 100 hours. 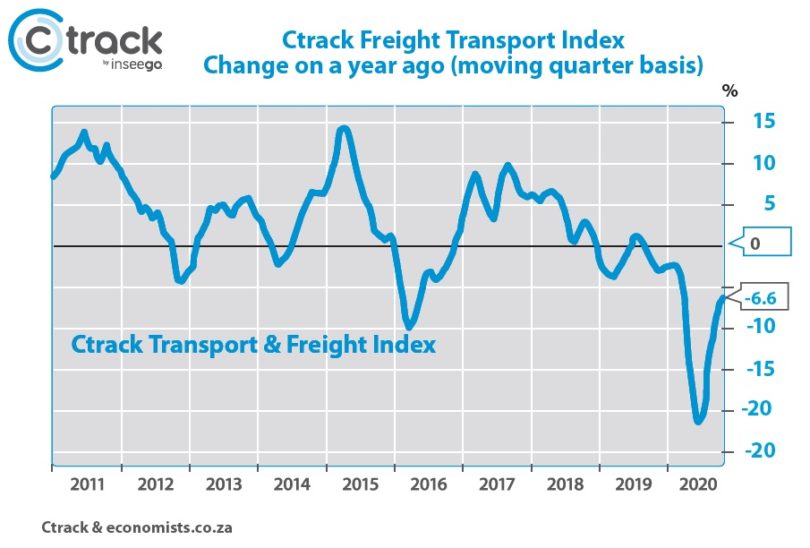 The economic strife that was absent during COVID-19 lockdown period is now once again rearing its head as truckers have come under attack in various regions of South Africa. In October rumours of difficulties that truckers are facing from a variety of criminal elements were once again doing the rounds.

Internationally analysts have seen the global supply chain recover up to 90% of pre lockdown levels but further lockdown restrictions in Europe and the USA have put the brakes on that recovery.

The fourth quarter of 2020 will certainly not see the same growth as the record breaking third quarter did, but some improvement is still expected.

The slowdown in growth was expected, most analysts will attest, that the closer an industry gets to its previous levels, efficiencies, productivity levels and bottlenecks have to be overcome again. Furthermore, some sectors, such as tourism which also require transportation of freight, will take years to get back to speed. Fortunately, the overall Road Transport industry has held up reasonably well.

Bulk Rail transport underperformed slightly, this is most probably due to supply chain disruptions in China and elsewhere.

Following a period of negative growth, 95% of the bounce back can happen in a few months but the last 5% can easily take double the amount of time. As other sectors are also integrated with transport sectors it is clear that reaching 100% of the levels seen in the middle of 2019 is still some months away.

As the rollout of COVID-19 vaccines begins over the next year or so, the world and even tourism, will get back to normality. Of course, this vaccine is still largely unproven but this good news from scientists is important for the transport sector too.

Firstly, on a year to year basis every single Ctrack Freight Transport sector shows negative growth, although not as significant as was previously experienced.

Graph 2: Ctrack Freight Transport Index on a year ago. 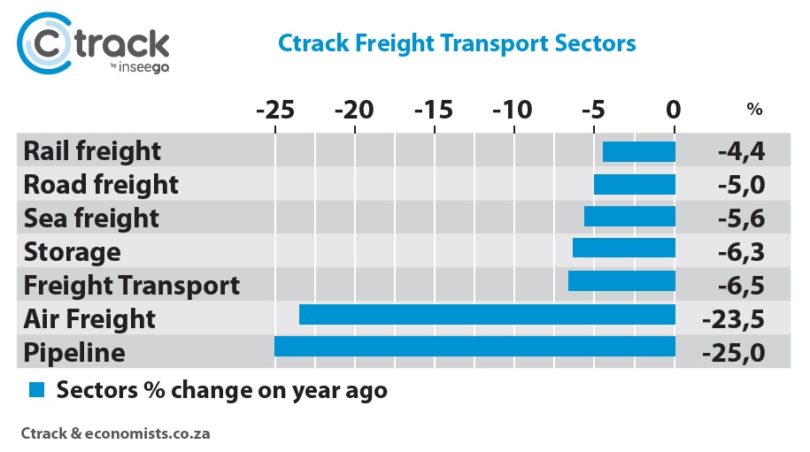 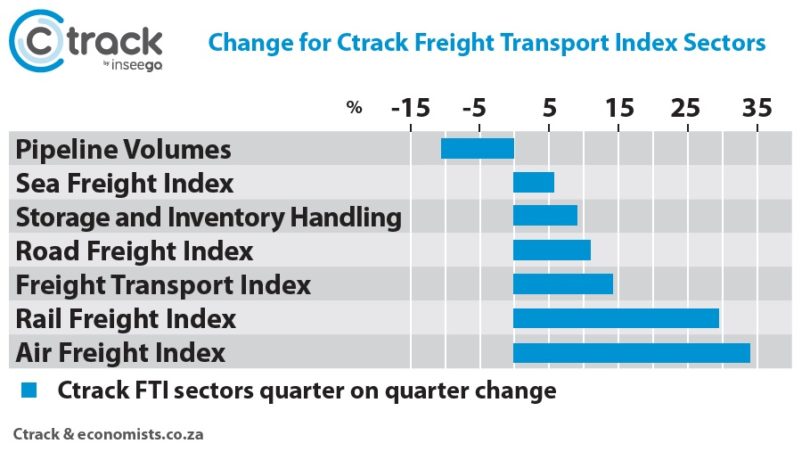 Fortunately, the three months ending in October compared to the three months ending in July shows visible improvements in all sectors except the pipeline sector as shown in the quarter on quarter graph. That being said, the pipeline sector had a near record month in October following two very weak months, so that recovery is certainly on the horizon.

Real pain is still being felt in the air freight sector while sea freight and particularly bulk cargo in both the rail and sea freight sectors had a terrible month. Container imports are still well below normal, tracking over 23% lower compared to last year. Container exports were down 9% during October.

IATA reports that global airfreight volumes were still 47% lower than a year ago. There is some improvement, driven by East Asia and North American markets, but the year on year numbers still indicate massive declines.

Closer to home, the total kilometres flown with airfreight in Africa improved with an incredible 8,2% compared to a year ago. Locally air freight is still below levels seen in 2019 but it is recovering while international airfreight has shown a slight increase too.

Higher value freight seems to have been more significantly affected by the lockdown and Covid blues compared to bulk goods such as fuel, iron ore and coal. These higher value goods such as cell phones and cars have experienced a decline in sales, but they are expected to bounce back in the coming months.

Freight such as food shipments between countries on the continent are being held up at border posts which is a sad situation to witness.

“It is clear that business is motivated to end 2020 on a high note, but several external factors are making this tricky. Ctrack have a number of solutions for these issues and are ready to work with our customers to aid them in keeping their businesses on track,” says Jordt.

Although growth across all sectors has slowed down, the good news is that the Ctrack Freight Transport Index shows that all sectors are moving in the right direction.

The graphs illustrate the seven-sectors compared to a year ago and a quarter ago, both as a quarterly moving average basis.