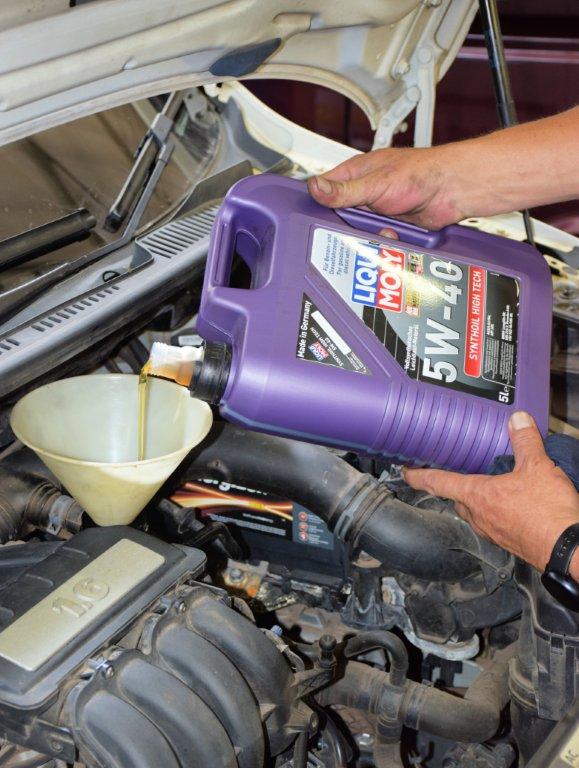 Brian Joss – Can you trust the service record that comes with the pre-owned car you’ve just bought? While it is easy to be cynical and say not at all, it is probably wise to be realistic and adopt a caveat emptor – let the buyer beware – approach.

Liqui Moly thus recommends a “purge and replace” philosophy when buying a used car, largely irrespective of what the paperwork claims.

Says Shaldon Botes, Liqui Moly South Africa’s Application Engineer: “Brake fluid, gearbox or transmission oil and hydraulic fluid for the steering system are often overlooked and certainly on older cars, the records can be hazy. We believe in a safe-rather-than-sorry policy to avoid the continued use of a lubricant which may already have lost its efficacy and will therefore accelerate wear. When it doubt, replace!”

He points out it is critical to replace brake fluid regularly due to its hygroscopic qualities – it absorbs water. The problem is two-fold: water in the fluid reduces the boiling point (causing bubbles to form, resulting in a spongy pedal and reduced stopping power) and the water will cause corrosion inside metal brake lines, and can also form on components like the caliper pistons.

“While some manufacturers specify a ‘lifetime’ fill on gearboxes and differentials, we don’t subscribe to that theory. You may not know what sort of life the vehicle had, and wear and tear can accelerate dramatically if it is a working bakkie which has been operated in a hostile environment,” comments Shaldon.

“With the engine oil you’re also unlikely to know what specification of lubricant has been used and there is also no guarantee whether the engine was flushed at every change. In our experience, engines which have remained healthy in the long term are those which have undergone regular – and that means conservative on time and distance – oil and filter changes.”

Consumers should also consider having an oil sample analysed – it is like a blood test for you vehicle and microscopic particles in the oil will give an indication of the overall health of the engine.

Liqui Moly recently assisted one of their brand ambassadors – Adrian Burford of race driver coaching business, Stigworx – with a “purge and replace” on a 1.6-litre Caddy van. While it has been owned by the company for several years and serviced regularly, it has never undergone a gearbox or brake fluid change.

These tasks were undertaken in the workshop of RGMotorsport, a leading tuner and repairer of late model vehicles in Randburg.

The following products were used:

SL6 brake fluid – this synthetic Dot 4 fluid contains corrosion inhibitors and has been developed to extend the life of components in the brake and clutch systems. It has a high wet boiling point – which means it is still highly functional even after absorbing moisture over an extended period of use. +- R150 per 500 ml Engine flush Plus – it dissolves sludge, then suspends all impurities so that they are flushed out. It is essential to flush thoroughly to remove all old oil and deposits to gain maximum value from new oil. +-R100 The colour of the old brake fluid was disturbing and while it would be difficult to feel the difference, there is joy in knowing that refreshed fluid can only be a good thing. As far as the gear oil replacement goes, an improvement in the quality of the shift to third gear, which was becoming slightly baulky, is apparent. Subjectively, both the volume and tone of the engine note has reduced.

“A purge and replace gives you as the new owner peace of mind that your journey is starting off in an ideal manner: you’ve got the best products in all the vital mechanical systems, and can start your records afresh from what is essentially a new ‘day one’,” concludes Botes.