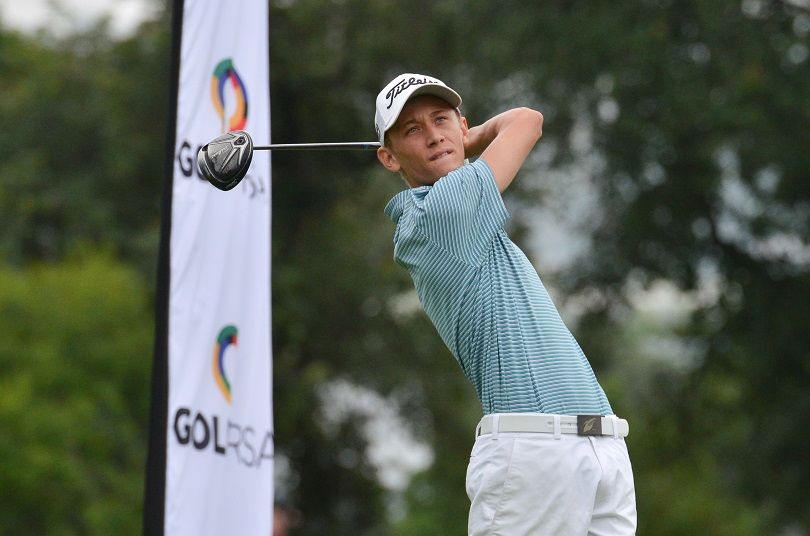 It was a memorable day for Goldhill, who a superb start with four birdies on the bounce. He pencilled in four more on the sixth, seventh, ninth and 12th holes and capped a flawless 62 another brace at the closing holes.

“That was the first time in my career that I shot a bogey-free round,” gushed the 20-year-old Magalies Park golfer. “With so much rain, the course was very score-able, especially with placing. The greens were soft and you could pretty much fly it all the way to the green and it would sit down dead.

“I took advantage early on and started with four in a row. The back nine was a little trickier as the weather warmed up, but I kept the momentum going. I played the course exactly as I wanted to, but I also had a few lucky breaks.

“The rest was pretty solid. I hit a full 6-iron in and I rolled a nice putt in on 17. On 18 I hit a 5-iron just over the flag. It pitched and rolled into the bunker, but I caught it really nicely and it spun back and dropped in the hole. Definitely a round I’ll never forget.”

Goldhill will to wait until the first round is completed on Tuesday to see if his overnight lead stands.

Dangerous conditions forced close to a three-hour suspension and play had to be called off due to failing light at 18h20, which means the afternoon field must return for a shotgun start at 06h30 on Tuesday to complete the round. The second round will follow the completion of round one.

Meanwhile GolfRSA No 1 Martin Vorster also put himself in the running with an eight-under 64.

The Southern Cape golfer was benched with a wrist injury for the greater part of the 2020 season and made a tentative return to competitive golf on the local Southern Cape circuit late in November. He worked with his coach over the festive season to fine tune his swing.

The hard work showed with top six finishes in his first two competitive starts in 2021.

“Competing in the Free State and Gauteng North Opens definitely got me to get back into competitive mode,” said Vorster. “I drove the ball really well and I felt confident with the putter. A few putts didn’t drop, but I was pleased that I didn’t drop a shot all day. It’s the start I was hoping for.”

Gauteng golfer Adam Breen, who also spent most of last season recovering from a back injury, was equally pleased to place in the top three.

The former Country Club Johannesburg club champion got it to seven-under with a tap-in birdie on the 14th hole, but gave a shot back with a three-putt bogey on 18. He signed for a six-under-par 66 to tie defending champion Casey Jarvis for third.

Boland qualifier Liam Millard and Pecanwood golfer Slade Pickering both moved to seven-under with six holes to play when play was called off for the day.