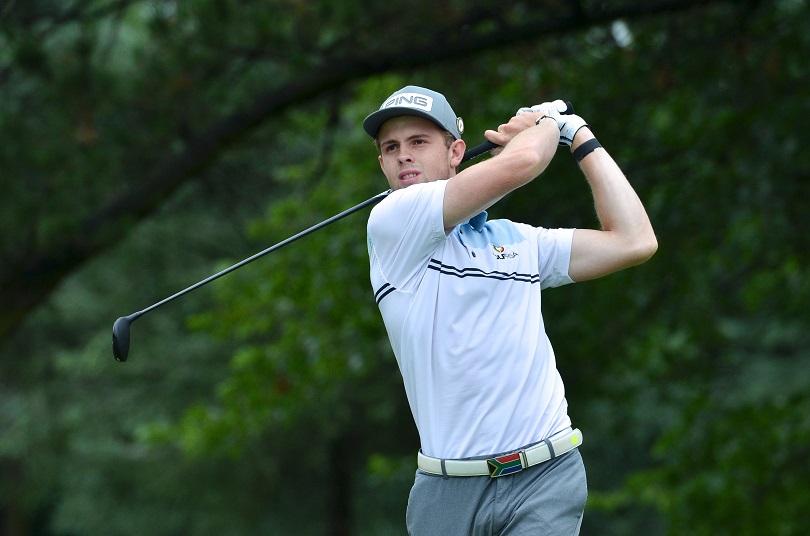 Vorster opened his campaign on the Firethorn course with flawless 64. On another day of heavy rain, the GolfRSA National Squad member picked up where he left off the previous day with an eagle on the par-5 third.

A further six gains for a seven-under-par 65 saw Vorster surge six shots clear of the field.

The presence of South Africa’s leading amateur in the world rankings at the top of the leaderboard will not go unnoticed. Despite a lay-off of seven months, the World No 30 is clearly back to form. And he is no stranger to success.

Last year, the 19-year-old edged out Englishman Olly Huggins at the fourth play-off hole for the African Amateur Stroke Play Championship title at Leopard Creek. It was his fourth international victory in four years after he won the 2017 Italian U-16 International, the 2019 East of Ireland Amateur Open and became the first South African champion of The Junior Open with a wire-to-wire victory at St Andrews in 2018.

Should Vorster hold on for victory, he would join an esteemed list of past champions, including Major winners Ernie Els and Trevor Immelman, PGA Tour winner Branden Grace and European Tour champions Richard Sterne and Haydn Porteous.

The Louis Oosthuizen Junior Golf Academy graduate has a commanding lead on 15-under, but he is determined not to get carried away with 36 holes still to play.

“I’ve been in this position before. It’s a nice cushion, but it’s still early days,” he said. “I’m going to play the next two rounds as if I’m chasing. It helps me not to get complacent. There’s still a long way to go and anything can happen on this course.”

Vorster took advantage of the soft and slow greens after days of incessant rain.

“I didn’t drive the ball as well as I did in the first round, but I holed a lot of putts. I thought the greens would have sped up and I left a few birdie putts short early on, but the eagle putt on the third got me going. I pulled my drive slightly on the third, but I hit a 6-iron exactly as planned to 3 metres and holed the putt. Other than the lip-out for par on the 16th, it was a pretty solid day with the putter.”

Gauteng North golfer Dawid Opperman is second on his own.

The B-Comm Accounting student first had to complete his first round in the early morning downpour before heading out almost immediately for the second round. Opperman, who won the Free State Open in January, carded rounds of 68 and 67 to finish on nine-under.

A little sibling rivalry is on the cards for Centurion duo Wiehan and Francois van der Walt. The brothers were drawn together in the same three-ball after Wiehan tied for third with Ryan van Velzen on eight-under and Francois finished a further shot back in joint fifth with Adam Breen.

PHOTO – South Africa’s No 1 ranked Martin Vorster threw down the gauntlet and opened up a six-shot lead at the 36-hole mark of the South African Stroke Play Championship at Randpark Golf Club; credit Ernest Blignault.