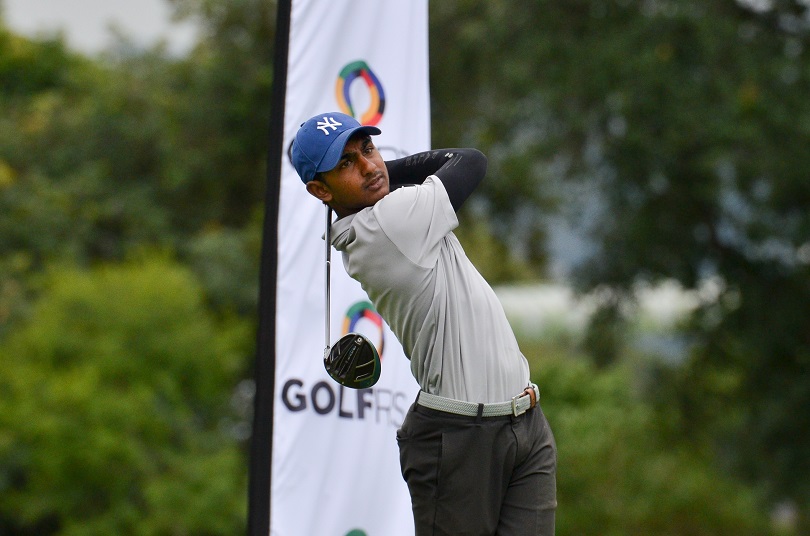 DOWERGLEN, 8 February 2021 – A blaze of birdies on his back nine boosted KwaZulu-Natal teenager Kyle Kistensamy to the summit of a congested first round leaderboard in the African Amateur Stroke Play Championship at Glendower Golf Club on Monday.

After the soggy build-up over the last two weeks, the clear skies and the sun dappling through the trees brought an air of expectation of something special to come as.

Kistensamy burst from the blocks with a birdie start on the par four 10th and the 19-year-old edged into the sole lead with further gains on 15 and 16, but for a while it looked as if he would be eclipsed after bogeys on the first and third holes.

Reigning Amateur Champion Joe Long from England and defending champion Martin Vorster, among others, took a turn at the top, but when Kistensamy changed tactics on his back nine, he fired his way to the front.

“I just started playing percentage golf,” said the South African Golf Development Board player, who made four birdies on the bounce from the fourth en route to a pacesetting four-under-par 68. “I stuck in the fairways and hit my irons close, all inside eight feet and let the putter do the rest.”

Kistensamy will sleep on a one shot lead after Tuks B.Com Accounting student student Francois van der Walt closed the gap with four birdies over this six holes.

The Englishman mixed an eagle and a brace of birdies with two bogeys in his round of 70, while the GolfRSA No 1 also produced an eagle and racked up four birdies to offset his dropped shots.

They share third with Pickering, Kyle de Beer, Judd Sundelson, Altin van der Merwe and Englishman Zach Chegwidden, who propelled himself up the leaderboard with a quartet of birdies during his homeward loop.

Kistensamy won the 2020 KZN Premier Order of Merit, courtesy of a hat-trick of wins and a runner-up finish. He will be heading to college in the United States in August and, hoping to play as many Open Amateur events before he leaves, he began the season by winning the KZN qualifier for last week’s SA Stroke Play.

He also competed in the Free State and Gauteng North Opens to prepare for the SA Stroke Play.

“The conditions at Randpark was really tough, but it was a great learning experience. I’m happy that I brought the best of my form to Glendower, because this course is completely different,” he said.

“You have to keep it play, because the rough is very heavy thick and the course is very tight. I hit a lot of good tee shots and really good approaches, especially on the last nine holes. My iron-play made all the difference. If you’re patient and you hit the ball in the right spots, it’s possible to be in a position like I am right now.”