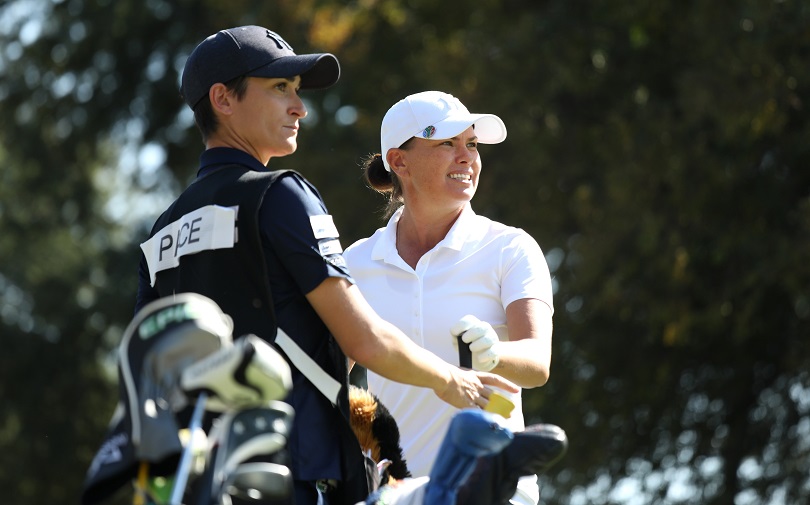 SOWETO, 28 April 2021 – Lee-Anne Pace’s bid for an unprecedented 14th Sunshine Ladies Tour victory got off to the ideal start with an opening round of 68, which shot the LPGA Tour champion to the summit at Soweto Country Club.

Pace made three birdies on the bounce on the challenging par-72 layout to set the clubhouse target and finished the day three shots clear of chasing pack, led by Maiken Bing Paulsen.

Nobuhle Dlamini, who lifted the trophy in 2019, carded 72 to tie for third. The eSwatini golfer finished alongside French debutant Justine Dreher and her compatriot Emie Peronin, as well as well as Casandra Hall, who enjoyed a third place finish in her rookie start in 2019.

Pace has won in every season since the tour launched eight years ago and she picked up her last trophy in the 2020 Cape Town Ladies Open last year.

Fittingly, was the champion of the first Joburg Ladies Open held at Royal Johannesburg & Kensington in 2016.

The circuit’s most prolific winner rolled back the years with a vintage display in the near perfect conditions, gaining shots on the field with birdies on the par four fourth and short seventh hole. She was five-under with three holes to play when her momentum was checked with a bogey on the 16th, but she put an early marker down with pars at the closing holes.

Pace said: “That was a really nice round. I’ve been in contention every week since the start of the season, but my swing is getting to where I want it now. I am striking the ball really well and shaping the shots the way I want. I holed some very nice putts and I hit it steady all the way through, so I was pleased with that. There is a lot of golf left to play, but I’m feeling positive about my game.”

Considering that Pace had never played the course before, it was a solid performance and one that sounded a loud warning to her opponents.

“I’m nursing a toe injury, so I wanted to limit the playing to the three tournament rounds,” said Pace, who roped in Ladies European Tour campaigner Anne-Lise Caudal to do bag-duty this week.

“Anne-Lise injured her wrist playing out of a plugged lie in last week’s SuperSport Ladies Challenge and she withdrew this week to rest her wrist. She offered to take the bag, so she walked the course in the practice round. And off we went this morning. We combined her insights and my game pretty well. It’s a challenging layout. You have to play strategically and position yourself well to give yourself a chance to score.”

Paulsen, who made her Ladies European Tour debut last year, is playing in her first season on Africa’s premier women’s professional circuit.

The Norwegian was also in the mix at the Gary Player Country Club last week in her first start and finished sixth overall, courtesy of the low round of the day – a 68 that featured two eagles and three birdies. She got within two shots Pace’s target, but let herself down with a closing bogey.

Paulsen described her astonishment at how far the ball travels in Johannesburg on her blog, but she seems to have adjusted quickly to extra yardage. She was the only other player on the first day to finish in red numbers after offsetting a trio of bogeys with four birdies.

All competitors RSA unless otherwise specified; amateurs indicated as (a)