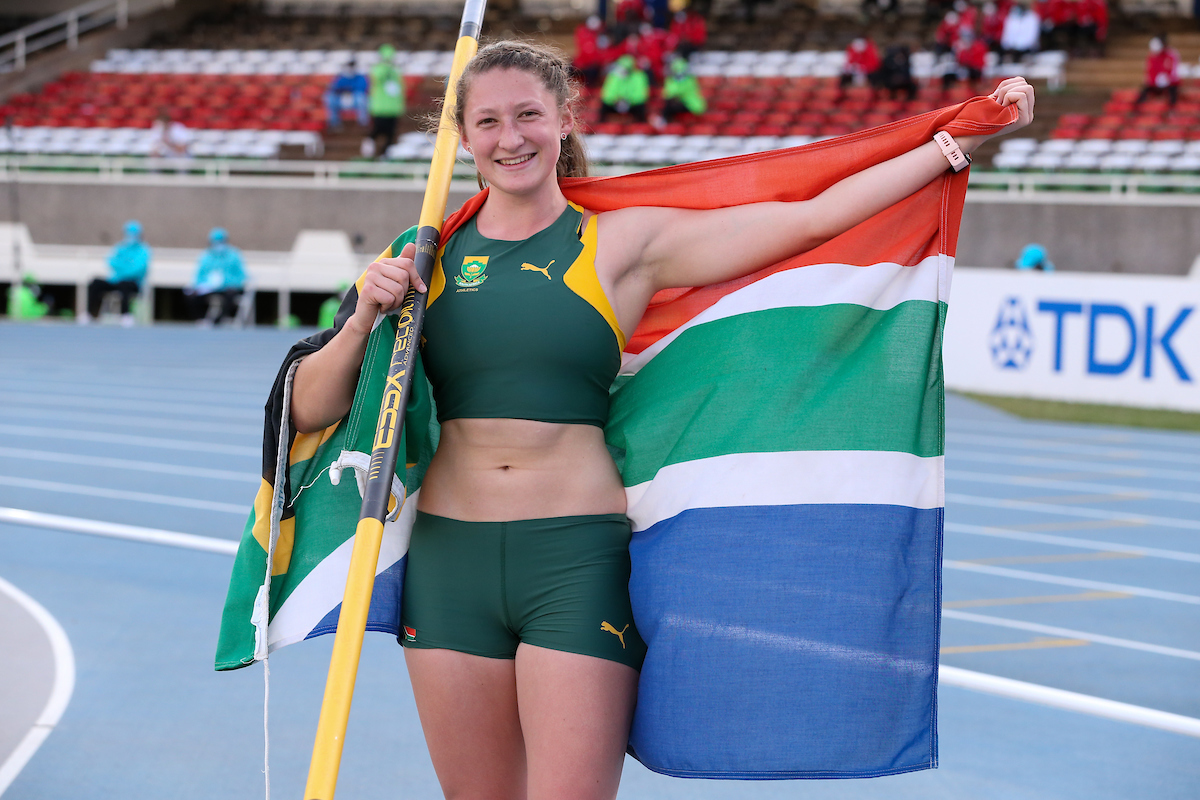 Reinstorf cleared 4.15m with her first attempt to bag gold in the women’s pole vault final, holding off a challenge from Elise Russis of France (who also cleared 4.15m) to win on countback. The 19-year-old South African broke the African women’s U20 record of 4.10m which had been held by Syrine Balti of Tunisia since September 2002.

“I’m so happy, so gratefull for this. It’s my first international competition and I’m so happy it turned out this way. I honestly didn’t think I’ll get a medal. It’s actually been nice conditions. The wind was also not bothering me. It was neither too cold or to warm.

Keeping his medal hopes alive, Benjamin Richardson finished third in his 100m semifinal in 10.30, snatching a spot in the field as one of the ‘fastest losers’ for Thursday’s final.

His compatriot Bradley Oliphant was also third in his semifinal in 10.49, but he was eliminated, while Charlize Eilerd finished seventh in her 100m semifinal and she was unable to progress in the women’s short sprint.

Pillay won his individual 400m heat in 46.55 and Nortje was second in his heat in 46.27, while Molepo finished second in her heat in 54.41, with all three athletes progressing to the men’s and women’s one-lap finals, to be held on Saturday.

“It was a strong heat, though I did not push too much and I am happy with the result,” said Pillay, who competed at the Tokyo Olympics earlier this month.

Recently I have travelled much between Italy, Tokyo, South Africa and now in Nairobi but I am impressed with how my body has responded in this race.”

Javelin thrower Zander van der Merwe was ninth in the men’s javelin throw qualifying round, with a best heave of 68.56m, and he booked his place in Friday’s final.

Armant van der Linde ended 16th with a 64.39m throw and he was knocked out of the competition.

In the men’s shot put, DJ Liebenberg was 13th in the qualifying round with a best effort of 17.69m, falling just 15 centimetres short of a place in the final. Aiden Smith ended 15th (16.94m) and he too was eliminated.

Earlier, Kayla la Grange took fifth place in her first-round 100m heat in 12.02, missing out on a spot in the semifinals, and Pieter-Juan Vorstman did not achieve an official mark in the men’s hammer throw qualifiers.

Of the 54 athletes who named in the final team, three could no longer travel after testing positive for Covid 19 in South Africa.  Due to Covid protocols, the negative results in a subsequent test could not negate the fact that there was a positive result.

The affected athletes (names withheld) were, therefore, not allowed to join the rest of the team to travel to Kenya.

Athletics South Africa (ASA) is the national governing body for the sport of athletics (including Track and Field, Cross Country, Road Running and Race Walking) in South Africa, is a member of the  IAAF and  the Confederation of African Athletics.  The association was formed in 1995 and is based in Johannesburg.