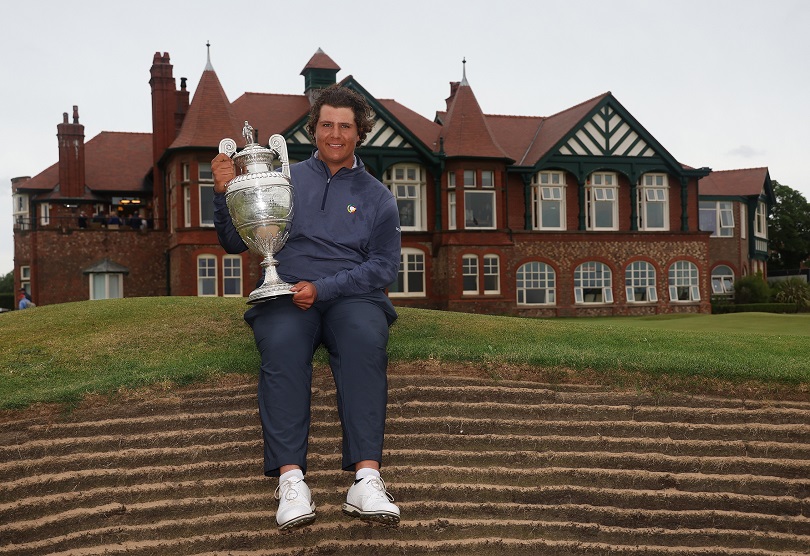 This is where teenage sensation Aldrich Potgieter will be heading in the year after he claimed amateur golf’s biggest prize with his dream win in the 127th Amateur Championship at Royal Lytham & St Annes on Saturday.

In a thrilling 36-hole final at the Lancashire links, the 17-year-old South African displayed a maturity beyond his years and stood his ground in the face of a superb comeback from Englishman Sam Bairstow to seal a nail-biting 3 & 2 victory.

With the win, Potgieter became the third SA to lift the prestigious title after Bobby Cole (Carnoustie, 1966) and Jovan Rebula (Royal Aberdeen, 2018), and the second youngest winner of The Amateur since Matteo Manassero triumphed in 2009 at the age of 16.

“It’s really amazing,” Potgieter said. “I can’t really find the words; there’s no feeling like it and I haven’t felt this good before. It will take some time to sink in, because right now the words can’t even come out of my mind to describe how I feel.”

The GolfRSA National Squad member was extraordinarily impressive over nine rounds considering this was his first-ever visit to the UK and only his third competitive start on British soil.

He laid down a marker for the life-changing achievement with rounds of 71 (Royal Lytham) and 69 (St Annes Old Links) in the 36-hole stroke play qualifier – won by fellow squad member and reigning SA Stroke Play champion Jono Broomhead – to advance to the match play stage.

Potgieter then made quick work of his first-round match against Englishman Monty Scowsill (6 & 4) and exacted revenge for his Louis Oosthuizen Junior Golf Academy teammate Jordan Duminy, who was knocked out by Matteo Cristoni in the top 64 play-off, by beating the Italian 3 & 2.

Having to face squad captain and mentor Kyle de Beer, of Gqeberha, in the top 16 proved quite a bit tougher, but the Southern Cape junior edged the reigning SA Amateur champion with a par on the 19th hole.

For the next 72 holes, with 2022 Brabazon Trophy winner Christiaan Maas on the bag, Potgieter was formidable.

The Mossel Bay teen knocked out Germany’s Laurenz Schiergen 2 & 1 to set up a semifinal clash with Alex Maguire, fresh off his East of Ireland Amateur Open win, and produced a strong finish to down the Irishman 3 & 1.

Match play can easily play with your emotions and none more so than going into a 36-hole final.

Facing Bairstow, the 2021 Brabazon Trophy winner and obvious crowd favourite, was always going to be tall order, but Potgieter quickly stamped his mark on the match and a superb bogey-free four-under-par 66 in the morning session earned him a seven-up lead.

“On this golf course, going bogey-free on the first 18 holes was incredible for me,” Potgieter said.

“I played really well, and everything worked out in the morning. I expected Sam to do better than he did in the morning. He didn’t play too well, but I knew he was going to come out strong; he wasn’t going to give up. I just had to play steady and keep my lead.”

If you take the lead in match play, you may become more relaxed, and a player who has the lead will probably play more conservatively, but Potgieter did not hold back over the final 18 holes.

He conceded the 21st hole to a Bairstow birdie, and the Englishman won the 24th with a birdie, but the big-hitting South African reclaimed a six-up lead with a birdie of his own on the 26th hole.

Bairstow’s charge gained momentum on the back nine and the Hallowes golfer clawed back the 28th, 30th and 31st holes.

Potgieter’s lead was cut to just two-up after he doubled the 32nd hole, but with four holes to play, his superb short-game held up under pressure.

A crucial par on the 33rd hole — the par-4 15th — took him back to three-up and Potgieter was left with two putts for the win on the par-4 16th after Bairstow’s birdie putt stayed out.

“At the beginning of this week, I just tried to make the cut to make the match play, and then I just went from there, match by match,” Potgieter said.

Potgieter’s achievement at Royal Lytham, combined with his rise in the world rankings over the last three years, has been nothing short of spectacular.

In 2019, he was ranked 6,000th on the World Amateur Golf Ranking, but by the time the family returned to SA in December last year after nine years in Australia, he had risen to 2,800 and was West Australia’s No 1 junior, Golf Australia’s No 6 junior and ranked 26th on the Golf Australia Open Amateur rankings.

He made a spectacular start on the GolfRSA circuit, tying for third in the African Amateur Stroke Play Championship at Leopard Creek and claiming his first victory in the Nomads Junior International in early March.

That same month he won the Nomads SA Boys U19 SA Boys Stroke Play Championship and backed up the tournament record 20-shot victory at Royal Cape with an 8 & 7 win to lift the SA Boys Match Play title — becoming only the fifth junior since 1963 to complete the rare double after Richard Sterne (1999), Dylan Frittelli (2008), Zander Gous (2013) and Jayden Schaper (2015).

Before the squad left for the UK, Potgieter had climbed to eighth in the GolfRSA Open Amateur courtesy of three top five finishes on the provincial circuit, and added the Western Province Amateur Match Play title, which he also won 8 & 7, to his list of achievements.

Ranked 140th before the dream week at Royal Lytham, Potgieter has cemented his spot alongside fellow GolfRSA National Squad members Casey Jarvis and Yurav Premlall in the International Team for the 2022 Junior Presidents Cup in North Carolina in September.

But first, he can now look forward to competing in the 150th Open at St Andrews in July.

“I’m really excited. I played the Old Course recently during The St Andrews Links Trophy and it was really amazing,” said the young champion.

“I think the course is going to get in better shape and I’m really looking forward to the experience. The Open has always been my favourite Major because of all the history it holds.

“I never in my wildest dreams would have thought I’d be playing The Open at this age. It’s a dream come true and it’s going to be a tough few weeks, waiting out the return trip back to St Andrews.”