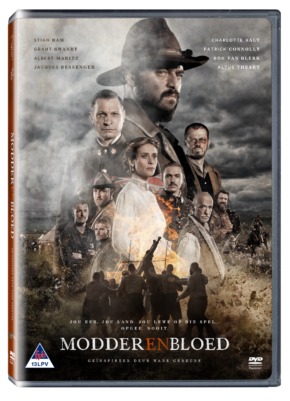 The critically acclaimed film Modder En Bloed is an epic tale of pride, hope, resilience, strength of human spirit and South African history; a superb addition to the library of leading South African films. Modder En Bloed is a film inspired by true events, set during the Anglo-Boer War in 1901 when a group of Boer resistance fighters were captured by the British and exiled in the internment camps on St. Helena; a small island over 3000km’s from South Africa in the middle of the South Atlantic Ocean. It is here that ‘Willem Morkel’ (Stian Bam) must overcome his inner demons to battle the tyranny of ‘Colonel Swannell’ (Grant Swanby) and save a young boys life through the game of rugby.

The South African war epic Modder En Bloed is the perfect addition to any budding film lover’s collection, and the perfect gift in 2016. Make sure you purchase your copy today from all leading DVD retailers nationwide.

If you purchase your copy of Modder En Bloed on DVD from Musica stores nationwide today, take a selfie holding the DVD plus your till slip, and upload it to the Ster Kinekor Facebook page to enter. One lucky winner and their partner will be jetted off to the Island of St. Helena where the Boer internment camps were situated, such as Stonewood and Deadwood Camp, during the Anglo-Boer War – the backdrop to the film Modder En Bloed and the place where Willem Morkel and his cohorts resisted the empirical oppression of Colonel Swannell through the game of rugby.

The competition is open to all South African citizens over the age of 18 holding a valid South African passport, and the prize includes two return flights and accommodation to St. Helena to the value of R50 000. The prize is subject to the commencement of the air route between OR Tambo International Airport and the new St. Helena International Airport. The competition closes on 30 September 2016.

Modder En Bloed was released to DSTV Box Office over the National Women’s Day long weekend, the producers are thrilled with the incredible support of the South African public thus far with over 12 500 DSTV subscribers already having watched the film with friends and family in the comfort of their own home.

Intent on making Modder En Bloed accessible for all South Africans to enjoy, the film Modder En Bloed, along with Tour Partners Afriforum, have embarked on a nationwide outdoor cinema tour called #FliekOpDieVeld, whereby Modder En Bloed will be screened to at least 36 towns around the country before the December 2016 holidays. Each event is aimed at bringing entire communities together to have fun with friends and family under the stars watching this critically acclaimed film. VarslugFlieks, Maroela Media, Pretoria FM, Virseker and Areyeng Rentals are all helping to make this tour a great success.

To find the #FliekOpDieVeld show dates closest to you, check out the Modder En Bloed Events page on Facebook – https://www.facebook.com/BloodAndGloryMovie/events