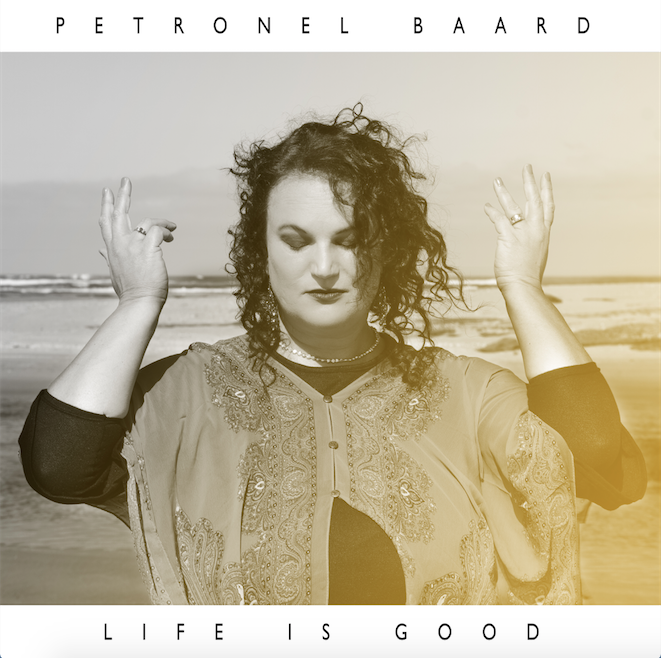 Petronel Baard, a passionate cabaret star with a soothing storytelling voice, has managed to establish a firm place for herself in the music industry over the past twenty-one years. Her new single, LIFE IS GOOD, is now being released and will definitely conquer the hearts of music lovers from across the country.

LIFE IS GOOD, written by the artist herself, is a contemporary track that combines elements of Folk and classical Pop with a unique South African sound. It’s about how short life is and how you should make the best of each moment that you have left. This hit is the perfect match for the musician’s strong, sweet voice and will definitely appeal to audiences of all ages.

“After two months of anxiety attacks, I had a dream one night. My family (and friends) and I walked through the streets of a beautiful city. I remember the chorus, the green trees and the large glass windows of the buildings. The incredible feeling of love and certainty that we must love one another. When I woke up, I immediately wrote down the melody and words, because I just knew that the world needed this message of love,” the singer says. “Shortly after, I got engaged and two days later, a good friend suddenly passed away. I sang it at her funeral and dedicated the song to her. Little did I know that we would lose my sister-in-law almost a month after our wedding, too. The song is dedicated to both of them; Sonja Pretorius and Marion Baard. It is still hard to believe that so much positive energy was created by so much sadness.”

A music video of the song, created by Efpe Senekal Produksies’s Efpe Senekal, was recently filmed and includes the most beautiful scenery (from Kleinbrak River, Grootbrak River and Mossel Bay), as well as footage of family and friends. “The video shows me, in a wedding dress, singing the song in the most beautiful places. These scenes are complemented by inserts of various people and places from our area who sing and dance to show that life is good… despite of, for the sake of, because of. It’s an absolute celebration of life,” she explains.

Petronel grew up in Villiersdorp. The singer’s mother and uncle (who was a principal and conductor of the Drakensberg Boys Choir) inspired her love for choir music. Her exceptional solo voice was discovered at the age of twelve during a school production of Sleeping Beauty and that was also the moment that she fell in love with both acting and singing. After school she studied Drama at Stellenbosch and started acting professionally in 1998. At the end of her honours year, she won ATKV’s Crescendo competition and became involved in the entertainment industry full-time.

Over the past few years, she has done numerous performances and plays and has had the opportunity to work with a few highly respected artists, such as Stef Kruger and Riku Lätti. She also recently had the opportunity of recording her sixth album, Die Heelal Draai, and credits it as one of her biggest career highlights so far. The album was produced by Soetmelk’s Schalk Maas and David Cruickshank and is described by Vrouekeur as “one of the most beautiful creations in Afrikaans”. Her debut album, Lank Al, was nominated for a SAMA and two Geraas Music Awards.

Petronel enjoys listening to a wide variety of music, but shares that Annie Lennox and Diana Krall has always been her greatest inspiration. She also reveals that she is very excited about the fact that meaningful music is becoming more evident in the industry, because she believes that melodies and lyrics should speak to the heart.

When asked about what else she keeps herself busy with, she explains: “Developing structures for local arts is my second career and passion. I, therefore, serve on the Western Cape Cultural Commission and chair our local cultural forum in Mossel Bay. I have been doing rural development through the arts for years. At the time, we had TISK Theatre Cafes in the Southern Cape which then became TEO (Theater Cafe Development). Among these, I serve with the work of our cultural forum, Mocca and Oer Moer Kultuur where we hold special functions with artists who perform by the age-old principle of ‘the hat’.”

The music industry has taught Petronel Baard that it is important to stay true to your own style and that you should never be afraid to live your passion. LIFE IS GOOD is the perfect combination of inspirational lyrics and a feel-good tune that not only showcases her voice at its best, but also invites listeners to sing along and celebrate life to the fullest.