The Western Cape Minister of Human Settlements, Bonginkosi Madikizela, along with the CEO of the  Social Housing Regulatory Authority (SHRA), Brian Maholo, signed a partnership agreement today that will guarantee funds being available for approved social housing rental projects in the future. 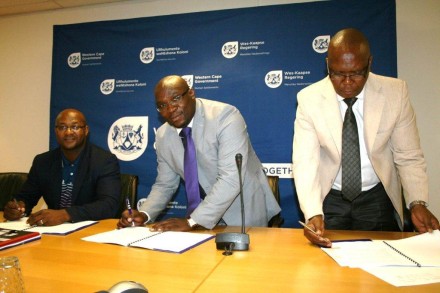 In recent years, the million Rand housing programs run by the Department of Human settlement have been solely financed by funds from SHRA, but despite setting up a business plan for social housing and including it in the Department’s Annual Performance Plan (APP), there were no funding guarantees.

Today the parties signed an agreement creating to assure “the funds to flow in an easier manner”, said the provincial Human Settlements Department spokesperson Kahmiela August.

The agreement meant the department would build houses that would be available for rent at reasonable prices so that poorer people could afford decent accommodation.

Rentals would range from R650 for a bachelor flat, up to a two-bedroom house for R2 200 per month.

August said the department also focused on establishing houses for rent in order to create social mobility and was a pioneer in this respect.

“People can move as job opportunities are changing”, said Zorah Ebrahim, SHRA Chairperson, giving people the choice as to where they want to live.

Additionally, the houses for rent were built in areas where there was access to education, transport and opportunities that they otherwise had been excluded from when living on the margins of the city.

According to Maholo, the social housing project was meant to provide a “stepping stone” for people moving up the housing ladder.

The project also aimed to break down the segregation created by apartheid spatial planning, said Ebrahim, as houses for rent would be built in various areas close to the city rather than on the margins.

In recent years the department had build rental units in Steenberg, Brooklyn and Bothasig Gardens. A total of 789 housing units were created in the past financial year, with another 720 units planned for the current financial year.

However, these units were “a drop in the ocean”, said Madikizela.

“The demand (for houses) is so high, they get taken up in no time before they’re even built.”

The Department hopes to extend the pioneering program to other cities in the province, such as George, Mossel Bay and Stellenbosch. – Nadine Ellinger