A rare bust of East London snake charmer and conservationist Never Die has gone on sale on Gumtree.co.za this week, fueling fresh interest in the unusual outsider and his contribution to herpetology and entomology. 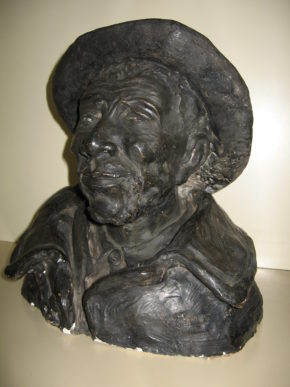 There is very little recorded information about Never Die, but he was a familiar sight in the East London harbor during the 1920s. Sporting a tattered hat and long black coat, Never Die would produce a MacIntosh toffee can or large bottle from his bag – filled with unusual spiders, snakes, scorpions or bugs – and attempt to sell his specimens to passing sailors. When he failed to obtain a buyer, he would deftly and casually demonstrate the proper treatment of a snakebite by pulling a venomous snake from his bag and permitting it to strike his arm. Sometimes he would suck out the poison, sometimes he wouldn’t. He was, according to eyewitnesses (and Never Die himself) entirely immune against any form of venom, hence his name.

Never Die was believed to have been born in 1846 in Gonubie. His tribal name is not known although he often spoke about the Great Famine, the result of the widespread destruction of cattle that all but annihilated the isiXhosa people in the Eastern Cape. Like most preteen boys, Never Die was a cowherd for his father’s cattle and it is conceivable that he spent his time in the veld studying the snakes and spiders that would make him famous. After the loss of the cattle, the family moved to Humansdorp and then relocated to East London.

Never Die attributed his immunity to his father, who supposedly fed him the liquid taken from the gallbladders of snakes since he was a small boy, although he also regularly drank a tincture of N’Deda Mabela, the bark of a lemon tree, as an anti-venom.

According to the East London museum Never Die didn’t merely catch snakes and spiders to sell them; he could also describe their habitat and behaviour in great detail, suggesting that he observed them carefully over time.

The statues had been made by Dorothy Randell, wife of famous Grahamstown advocate George Randell, before his death. One was passed down to Mandy Walker, the seller, and the other currently resides in the library of the East London museum. Walker says that she would love for the statue to “go to someone who will appreciate it” and that she has already received queries from prospective buyers.

Claire Cobbledick, Head of Marketing for Gumtree South Africa, says the artwork is uniquely South African. “We regularly see rare statues go up for sale on Gumtree, but these sculptures have played an important role in the conservation of Never Die’s legacy and were crafted with real affection. We hope it finds the right home.”

Never Die’s body was found in the brush close to the Buffalo River bridge on 31 January 1931, roughly five weeks after his passing. His beloved toffee can was used to identify him. He died in nature and it seemed, as AC Hastings wrote in the Daily Dispatch, “ Old Never-die…did not die, but slept”.

The statue is currently for sale for R27,000 and its twin can be viewed on Monday, Wednesday and Thursday afternoons in the East London museum.