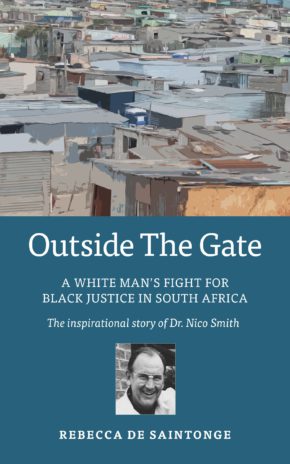 “As we South Africans struggle at the current moment to live beyond our trenches of race, gender and especially class, this book is a must read to inspire us to move beyond the enclaves that hold us captive.”

Nico Smith was once regarded as a traitor to the Afrikaner people, a thorn in the flesh, now he is lauded as a hero by those struggling to come to terms with their recent history.  At the request of a leading intellectual in the Afrikaner community OUTSIDE THE GATE has been republished with a new introduction, in the hope that it will inspire and encourage all those engaged with the painful task of re-evaluating their past.

Nico Smith shocked many people when, as a white man with an impeccable Afrikaner pedigree, a prestigious university post and a comfortable home, he moved house with his wife Ellen to the South African township of Mamelodi. The 1980’s were a time of violent political protest in the townships and as whites, the Smiths could not have chosen a more dangerous place to live. The move cost Nico friends, status and very nearly, his life, but it was to have a profound effect on political thinking and trigger a movement of reconciliation that inspired the international community.

Born into a staunchly Afrikaner family – his grandmother had died in the British concentration camps – Nico Smith had been taught to regard black people as an inferior race. But at the height of his career his doubts began. How could he, as a Christian theologian, reconcile the policies of apartheid with the Gospel’s command to ‘love your neighbour as yourself”? He could not.

This vivid biography charts the struggle of a man who has to re-think all he once held to be true and who ultimately risks everything for what he believes. It throws light on the historical abuse of the Afrikaner people at the hands of the British that contributed to their sense of alienation,  the systematic establishment of apartheid and the relationship between church and state that led to the belief that such inhumanity was spiritually justified.

Nico Smith was among the very few Afrikaner churchmen who had the courage to stand out against the system, and his story is an inspiration to his countrymen today who are still struggling to come to terms with their past and the role they were encouraged to play in it.

“Nico Smith  should be ranked among the most courageous of the heroes in Afrikaner history.”  Douglas S. Bax, Past Moderator of the Uniting Presbyterian Church of Southern Africa

Outside the Gate is now available as an ebook, or on Kindle. Go to: https://goo.gl/jwXp5c.

About the author:  Rebecca de Saintonge is a journalist and biographer and co-founder of LifeLines Press (www.lifelinespress.co.uk).

Her latest book, One Yellow Door, a memoir of love and loss, faith and infidelity  (Darton Longman and Todd, October 2015) was an Amazon No1 best seller within weeks of publication, and has been widely acclaimed in the national press.