“MY FATHER’S WAR comes highly recommended if you have memories of this war, or if you – as a woman – had to nurse the physical and spiritual wounds of your son or husband who is still struggling to come to terms with what had happened. This is an excellent film, one of the best SA films this year.” – Leon van Nierop. 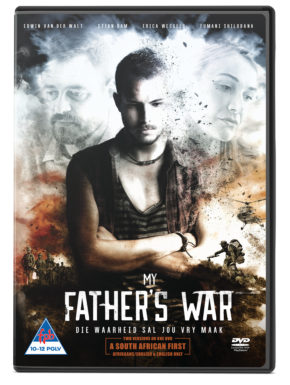 Award winning actor, writer, producer and film maker, Craig Gardner’s (who is renowned for his involvement with hits like Suburban Bliss, Joburg Blues, Madam and Eve and various programs on Nat Geo, Discovery Channel, Animal Planet, etc.) hard-hitting debut feature film, MY FATHER’S WAR, has conquered the hearts of viewers right from the start. This movie will soon be released on DStv BoxOffice and DVD and is a welcome addition to any South African movie enthusiast’s film collection.

This unique, bilingual (Afrikaans/English) drama focuses on the broken relationship between a father and his rebellious teenage son. The story is set in 2003, with the 19-year old Dap Smit (Edwin van der Walt) constantly fighting with his Border War veteran father, Dawid (Stian Bam). There is seemingly no chance of reconciliation between them. To make matters even worse, Dawid’s wife, Carina (Erica Wessels), is stuck in the middle of their epic struggle. Dap then suddenly has a series of dreams where he is a combat soldier during the Border War in the 1980’s. There he meets his father (at the same age) and experiences first-hand what soldiers of that time – in other words his own father – had to go through. These dreams irrevocably change Dap’s perception, his heart and life… with far-reaching consequences for him and his father.

While preparing for his role, Stian Bam, asked a former soldier family member for his impressions: “I asked: ‘What can you give me? I don’t want to know what you did. What is important to me is the relationship you had with your family, with your wife. Why did you decide to talk or not talk?’ And, he couldn’t answer that. He did eventually say that he did not speak to his wife about it. She knew certain things, but she also accepted that is what it was. But now, he’s talking to his son, which is wonderful, because that’s his healing.”

Edwin van der Walt says that this film is very personal to him and that he himself learnt a lot about love, relationships and the truth. “It forms part of a season in my life and to work with my mentor, Stian Bam, was and always will be a highlight in my life. It was a very trying process, but also incredibly enriching, and we all gave 120%!” About his hopes and expectancies for the film, Edwin says: “I hope and believe that the film can be a step in the right direction for people to mend their broken relationships. Before a wound can heal it must first be raw. I hope that everyone learns more about the Border War and the effects it had on our grandfathers, brothers and fathers. I hope that my own father, who was also a part of this war, will feel like a HERO when he watches the film.”

Other actors starring in the film, include Fumani Shilubana, Neels Clasen, Hannes Muller, Meren Reddy, Jai’prakesh Shewram, David Rees and the up-and-coming child actor, Vian Singleton. “I was very excited about my first movie-role. The highlight for me was when director Craig Gardner spent time with me before scenes. His passion and leadership made me understand exactly what was expected of me and made the experience that much more special. I think that MY FATHER’S WAR offers everyone in a relationship, whether it be father, mother, child, grandfather or grandmother, the opportunity to understand the challenges of relationships and to overcome them,” the talented ten-year old says.

According to the producer, Peter Lamberti, and writer/director Craig Gardner, the theme of combining a broken relationship with the Border War was the biggest challenge of the film – in other words, to overcome the gap between a father and his son because of a war that happened thirty years ago. And to this challenge, Gardner created the important dream scenes. He says: “With Peter’s invaluable input, every dream was created to advance the unfolding story. Thus there aren’t any unnecessary fighting scenes. The war dreams are rather microcosms of the real events that join fiction to promote either the characters or the story line – like mini stories inside of a bigger picture.”

He adds: “The war was used as a creative tool to reveal the outcome of the story. We have, by choice, not delivered a moral stand against the conflict itself. This isn’t a Border War film – it is a drama about relationships (that is the core of every successful film). And MY FATHER’S WAR focuses on this broken relationship between father and son. We are hoping to reach as wide an audience as possible, but we also want every person affected by war – soldiers, women, men, children and parents to see it. It will hopefully be a cathartic experience that will awaken old memories, drive away ghosts and provide viewers with a better understanding – even to those who had no relation to the war.”

Bioskoop’s Anna-Marie Jansen van Vuuren says: “The scenes set during the Border War were recreated as realistically as possible – and cinematographer Tom Marais’ camera work and Chantel Carter’s art direction are on the same level as war movies such as Saving Private Ryan and Pearl Harbor. The special effects are definitely on international standard and at one stage I found myself imagining that I was under water with a crocodile lurking behind me.”

Although MY FATHER’S WAR contains Hollywood standard war scenes, which not only satisfies the toughest of critics, but also keeps viewers at the edge of their seats, it is so much more than just another action movie. It is a moving tale about conflict, pain, ghosts from the past and disappointments, but it’s also about forgiveness, faith, healing and love, that will touch everyone deeply who watches it, because it shows how the truth can truly set you free if you allow yourself to really see it.

The critically acclaimed film, MY FATHER’S WAR, will be available at your nearest video shop from 7 November 2016, can be rented on DStv BoxOffice from 9 November 2016 and will be for sale at selected stores from 25 November 2016.

WHAT MEMBERS OF THE MEDIA SAY…

“It’s not just a film you’re watching, their performances make you feel part of this father and son’s journey.” – Latoya Newman, Independent Online

“It was fantastic! I am not the kind of person who likes Afrikaans films, but this one definitely changed my mind. I will recommend it to anyone. The story was compelling from beginning to end and at night it even had me thinking about the dynamics of the relationship between a father and son.” – Nats Grobler, Rekord

“Recces says that it is the most accurate depiction of war.” – Beeld

“Apart from the high class production of the war scenes, there was also the task for Gardner to portray the emotional and gripping part of the film. The silence in the theatre, that moment when you wait for the actors to start saying something and all you hear is the breathing of fellow viewers, testifies of the film’s success in this area. This film will make you evaluate your own situations and in a way will make you strive to mend broken relationships in your own life.” – Louw Mulder, Stage & Screen

FEEDBACK FROM THE PUBLIC…

“I went to see it with my father and it is the first time in my life I’ve seen him cry” – Walla van Eeden.

“A must-see film, it was brilliant!” – Sonet van Dyk

“Whether you were a wife, mother or girlfriend of the men who served our country in a ‘senseless’ war, the film cleverly uses symbolism to portray the broken relationship between a father and a son. If you miss it, it will be a loss.” – Belia Nel