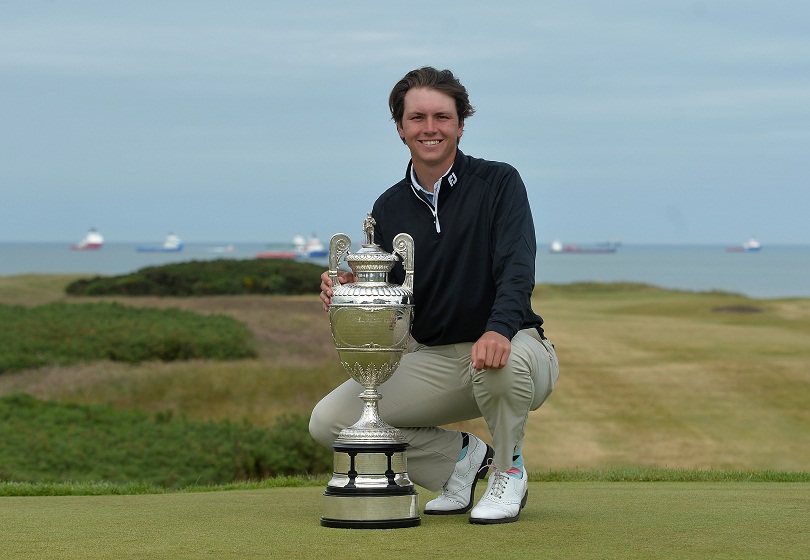 ABERDEEN, Scotland (23 June 2018) – Jovan Rebula became the first South African in more than half a century to break the curse of the Royals and win the 123rd Amateur Championship.

Prior to Rebula’s triumph, Bobby Cole was the only South African to claim the coveted Amateur Championship title, winning at Carnoustie in 1966, and since then South Africa has lost out in four subsequent finals.

With a combination of exquisite bunker shots, brilliant chips and a handful of clutch putts in windy conditions at the Balgownie Links, the 20-year-old Rebula ended the winning drought when he beat Dawson 3 & 2 – the same winning margin that won Bobby Cole the coveted trophy at Carnoustie in 1966.

“I’m very happy and very pleased with myself, the way I handled myself this week,” said the Auburn University student, who earned a berth in The Open Championship at Carnoustie next month, as well as trips to the Masters and the U.S. Open in 2019.

“I’ve really been playing solid and haven’t made many mistakes this week. It’s a huge honour for me to call myself the Amateur champion. It’s something out of this world.”

Rebula’s accuracy off the tee and the calm of fellow GolfRSA National Squad player Matt Saulez on the bag proved a lethal combination as Dawson struggled with distance control. A flurry of poor shots from the Irishman netted Rebula a 1-up lead into the final 18 holes.

“I played really well in the morning and got it to 3-up through seven holes or so,” said the Ernie Els and Fancourt Foundation member. “I felt unbelievably calm and I really just enjoyed it out there. Matt and I talked about keeping the hammer down and the momentum going. Having him on the bag over the last few rounds was a great experience. I can’t thank him enough.

“Walking to the first tee this morning, I saw my old teammate Kyle McClatchie, who was in the GolfRSA Squad with me and is playing on the pro circuit now. Kyle had a tournament here in Scotland and swung by to watch me play.

“And Malcolm (Mitchell) and our manager Davey Younge was out there too. Just small things like that really meant the world to me. These are friends for life and having them out there rooting for me was very special.

“We all had lunch together and we talked about stuff that kept my mind off the golf. Going into the last 18 I felt really good. I’ve been hitting the ball unbelievably well and I think the difference was that I was putting a little better in the last round.”

Four bogeys and a concession at the fifth gave Rebula a 5-up lead through 23 holes, but the reigning Flogas Irish Open amateur hung tough.

When Rebula missed a short putt on 13 and another to clinch the match at 14, Dawson won 15 with a fantastic up-and-down to cut the South African’s lead to three.

“I holed a 30-foot putt at nine to go 5-up, but that’s also tough,” Rebula said. “The margin is so big and you don’t know if you should put your foot on the pedal or on the brake. In my mind, I made the biggest putt of the tournament at 11 (par three). I hit it to 40 foot and had a 10-footer left for par. When Robin made par, I had to sink the putt. I holed it and that’s when I thought this tournament is mine.

“I didn’t play 13 well. I got too emotional and started thinking about closing it out and it came back to bite me. I ended up missing a five-foot putt for double bogey. I had the opportunity to close out the match at 14 but my four-footer horse–shoed back to me.

“That was brutal because all you want to do is close it out and your mind does crazy things. Then I had a plugged lie in the bunker at 15 and made another double. Rob made par to win the hole. Then Matt told me to forget about everything and just play the hole.”

Rebula responded with another majestic shot from the greenside bunker at 16 and holed a six-foot putt for par to halve the hole and celebrate victory.

“I hit a tee shot down the fairway and ended up pulling it into the greenside bunker. That’s when I told myself, ‘If you want to win this, you need to get this close.’ I hit it to six foot, holed the putt and got the job done.”

Rebula accomplished something his famous uncle, four-time Major champion Ernie Els, couldn’t accomplish in three tries. Els played a part in the final at Royal Porthcawl in 1988, when he caddied for Fouche.

“I have a tight relationship with my uncle Ernie and he is always motivating me,” Rebula said. “He said this would open doors for me and told me to go out there, to have fun and grab the opportunity with both hands. He’s awesome. Just a great human being.”