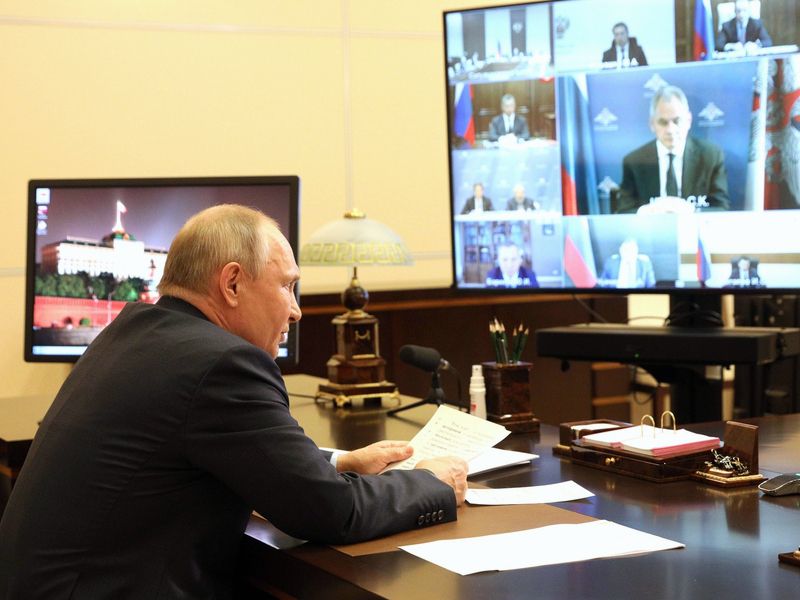 PenzaNews. Increasingly frequent attempts to distort history and to revise the role played by the Red Army in the routing of Nazism are connected with the strengthening of Russia.

This was stated by President of Russia Vladimir Putin at the 43rd meeting of the Russian Pobeda (Victory) Organising Committee which took place via videoconference on May 20.

“We celebrated Victory Day only recently, on May 9, but we always say that we must not forget about these issues and continue to help our veterans after May 9 as well. We will mark one more important date soon, June 22, the horrible day when the Nazis treacherously invaded out homeland. This year we will mark 80 years since the beginning of the Great Patriotic War. It claimed millions of lives, and nearly all our families remember their losses and their heroes to this day. This personal connection is what defines our people’s sincere commemoration of the war and war veterans in Russia. It is only logical that the list of amendments to our renewed Constitution, which were wholeheartedly supported our nation, includes a provision on commemorating defenders of the Fatherland and preserving the historical truth. As you are well aware, we have always paid special attention to these issues. Regrettably, the ranks of the great generation of victors are thinning out. But this is only increasing our responsibility for preserving their legacy, especially now that we are witnessing increasingly frequent attempts to slander and distort history and to revise the role played by the Red Army in the routing of Nazism and the liberation of European nations from the Nazi plague,” the head of state said.

He stated that the reasons are clear, and attempts to hamper the development of this country, regardless of its name, be it the Russian Empire, the Soviet Union or Russia, were made in different times and historical epochs and under different political systems.

“These approaches and principles remain the same. There is one principle or rather, one reason for containing Russia: the stronger and more independent Russia becomes, the more consistently it defends its national interests, the greater the striving of foreign forces to weaken it, to discredit the values uniting our society and sometimes to slander and distort what people hold dear, the things that are instilled in the younger generations of Russians and which help them acquire a strong character and their own opinions. This is why all kinds of Russophobic individuals and unscrupulous politicians are trying to attack Russian history, to promote the ideas of revising the results of World War II and to exonerate Nazi criminals,” Vladimir Putin said.

“We cannot but respond to these actions in a suitable manner. As I have repeatedly said, we will rely on facts and do everything possible to ensure the continuity of historical memory in Russian society, so that decades and centuries from now, future generations will cherish the truth about the war and display a sacred and grateful attitude towards its heroes, as well as to their ancestors,” he added.

Although large-scale and mass celebrations are essential, we have to prioritise systemic work here, President of Russia stressed.

“We have to continue to declassify new archive records and to allow researchers to use them. We must provide people with new opportunities for learning about the destinies of their relatives, as well as their combat and frontline experiences. We must expand such projects as No Statute of Limitations, which makes a substantial contribution to exposing the vile deeds of Nazi criminals against this country’s civilians and which implements important educational programmes. They must be presented more broadly at Russian schools and universities. On the whole, it is of paramount importance that we ensure well-coordinated actions, methods and positions of all state agencies and public organisations linked with studying and preserving the history of the Great Patriotic War and also dealing with education and teaching patriotic values. We must not act separately while addressing these issues, where efficiency and success depend solely on joint work and concerted efforts,” Vladimir Putin said.

Speaking of the importance for Russian citizens of such a historical period as the Great Patriotic War, Professor Martin J. Sherwin, Department of History & Art History, George Mason University, emphasized its enduring importance.

“Whether it is the Soviet Union or Russia the Great Patriotic War is an enduring monument to national historical pride,” the expert told PenzaNews.

“How will it be understood and used is the historical question. Will it be celebrated to promote democracy or dictatorship? It is essential to democracy that independent historians have the opportunity to research, write and publish their work. But a nation’s history cannot be assigned to one group and so all sorts of people will promote their views,” Martin J. Sherwin added.

Therefore, in his opinion, it is essential that the work of serious independent investigators is available to the public to counter the efforts of politicians and others to distort history in the service of their ambitions.

“A just society requires agreed upon standards of behavior. Banning fascism, xenophobia, and racism are therefore appropriate because they are forms of political behavior that undermine fairness, decency and virtue,” the American researcher said.

“The memory of the Great Patriotic War is as close to being sacred as anything I know of in contemporary politics. It has been fostered, shaped, and reinforced by Russia’s educational system, mainstream political figures, and the legacy media. Many of the themes – patriotic heroism and sacrifice, unique dimensions of loss, bonds of camaraderie, etc. – were forged in Soviet times and have been perpetuated since 1991,” Lewis Siegelbaum said.

From his point of view, the experience of professional historians is of great importance in describing the events of the Second World War, but they should not have sole responsibility for writing the history of this period.

“Novelists, film directors, and visual artists, among others, can also evoke and make meaningful aspects of the war that historians rarely touch,” the expert explained.

At the same time, Lewis Siegelbaum noted that attempts to distort and rewrite history take place throughout time.

“There is nothing new about politicians’ attempts to rewrite history by falsifying facts. Is it happening more now than in the past? Perhaps, although I don’t know how one would measure that,” the historian said and added that social media have played a role here generally not for the better.

“It is and always has been important to actively oppose any manifestation of neo-Nazism, aggressive nationalism, racism, and xenophobia. Once naively thought to be relics outdated by the enlightened practices of democratic polities, these perversities have gained new adherents owing to the dynamism of neo-liberal capitalism that has marginalized and delegitimized collective identities that made sense in the past,” Lewis Siegelbaum said.

Meanwhile, Jacques Sapir, Director of studies at the School for Advanced Studies in the Social Sciences (EHESS) in Paris, Head of the Center for Research of Industrialization (CEMI-EHESS), Foreign Member of the Russian Academy of Sciences, said that the Great Patriotic War is certainly a major fact in Russian representations today.

“It has deeply marked every family. With 26 to 28 million deaths, it is naturally a major trauma,” the historian noted but added that the significance of the Great Patriotic War varies across age groups.

Thus, according to him, the generation born in the war and post-war years, who knew the veterans well, associate the pride of Victory primarily with suffering and loss, while their today’s descendants – young people under the age of 30 – have a more abstract sense of pride.

Answering the question about the increasing attempts to distort the events of those times, Jacques Sapir stressed that history is the domain of historians.

“But, there is history and memory, two quite different things. And, the latter is invariably instrumentalized by politicians. However, any instrumentalization carries with it the possibility of a desire to rewrite history, to erase certain events, to glorify or, on the contrary, to denigrate certain actors,” he said, stressing that all the falsifications take us away from reality.

In his opinion, no country can do without a national narrative, and therefore a form of instrumentalization – turning an event into an instrument of political influence.

“But, once that is admitted, it is still necessary that this national narrative does not turn into a national novelization. If the victory of Stalingrad, and next year we will commemorate the 80 years of Operation Uranus, the Soviet counter-offensive, was brilliant, it should be remembered that it was preceded, from June 1942 to September 1942, of a series of defeats. However, not wanting to face the mistakes of the past is to condemn yourself to repeat them,” Jacques Sapir said.

Nick Cull, Professor at Master of Public Diplomacy Program, the USC Annenberg School for Communication and Journalism, shared the opinion on the inadmissibility of distortion and concealment of historical facts.

“As a historian who has looked at issues of propaganda and memory in international politics, I see great significance how events are remembered by states and their publics and great significance in the things that are allowed to slip from memory too,” he said.

“There are some countries where the Great Patriotic War, World War Two remains a central historical experience and a source of reference points which politicians regularly invoke. This is certainly the case in Russia as in the UK and USA. My wish would be that as well as remembering our own internal suffering, resolution and bravery we all would also remember the positive aspects of working together to defeat a common enemy and the sacrifices of our allies. […] I wish that Americans in particular knew more about Russia’s war. Visiting the National World War II museum in New Orleans I found it is easier to learn about the suffering of ordinary people in Germany and Japan during the war than in Russia. It is a little different in Britain. The alliance with the USSR is remembered in part because of the role of British sailors in the Arctic supply convoys and in part because it is in the nature of the British character to seek out a counterbalance to American remembering the war as a solo effort,” the historian said.

In his opinion, professional historians have a vital role to play as a reality check not allowing politicians to stray from the truth.

“But it is a perpetual struggle and not always welcome from the general public who love their myths. Historians have also to hold other historians to account as there are always some willing to distort in the name of ideology. We have seen this in the west with the few historians like David Irving who strayed into Holocaust denial,” Nick Cull explained.

At the same time, in his opinion, one role of professional historians is to remind the world that the Holocaust was not the only atrocity of that period.

“All the combatant powers have to face their own misdeeds. Britain mismanaged the Bengal famine, the US dropped atomic bombs on Hiroshima and Nagasaki and something terrible happened in the Katyn Forest and these things too must be reckoned into history,” the professor stressed.

“My preference is not to idealize the past but rather to come together and focus on the vision of a better future. This is actually what worked during the Great Patriotic War, and helped the world come together at its end,” he added.