Mjejane Game Reserve is situated on the banks of the Crocodile River where lush riverine forest is home to a stunning variety of birdlife, green pigeons fluttering among leaves in search of wild fruit, the haunting cry of the fish eagle and the scarlet flash of a purple-crested lourie in flight.

The 4,000 hectare reserve is located within the Kruger National Park fence and borders the southern boundary of the Park. Mjejane comprises unspoiled indigenous bush with over 10km of river frontage and the area is renowned for its superb game viewing.

Ownership option prices starting from R11 133 for a mid-week and R22 266 for a full week.  Monthly installments from as little as R288 per month. Prices vary depending on the Lodge size and time of year. All purchases can be financed by the developer over a maximum period of 72 months at prime interest rate + 3%. This is the most affordable piece of Kruger anyone can own.

Luxurious Park, River & Bush Lodges nestled in 4,000 hectares of pristine bush within the world renowned Kruger Park, on the banks of the Crocodile River.

The River Lodges vary in size either being the spacious 4 bedroom, 4 bathroom 10 sleeper or an equally comfortable 3 bedroom, 3 bathroom 8 sleeper. The larger of the two river lodge units consisting of four luxury air-conditioned en-suite bedrooms are the epitome of luxury in Shared Ownership. Each with a full bathroom and sliding glass doors that open onto the a deck offering 180 degrees of unrestricted views onto one of the most sought after locations – the Crocodile River. The lodges are in excess of 240m² which include air-conditioned, ceiling fans and comes with every form of luxury most can think of.

Each individual lodges also consists of an open-plan lounge, dining room & fully equipped kitchen, as well as a large pool and pool-deck with outside braai facility & furniture which will impress the best of connoisseurs. All of course with unrestricted views onto the Crocodile River. 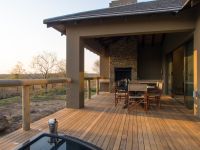 The Park Lodges are situated in the heart of the resort between the Bush units, on the southern game fence, and the northern River lodges. These lodges will have a very private feel; with their private plunge pool and bonfire lapa area around which the whole family can sit and enjoy the evening sounds of the bush such as the fiery-necked Nightjar or the elusive Scops Owl. These designs will also include a 1 bedroom/4 sleeper unit for a young family or couple that merely wants a romantic week in the bush. Both unit options will also include an outside shower.

The Bush Lodges are situated along the southern game fence to overlook the reserve and two waterholes. It is hopeful that the waterholes will attract more general game as the drinking conditions will be more suited to a skittish antelope than the steep riverine conditions. However, we cannot rule out the possibility of the occasional leopard or lion making use of this fresh water source. The loft bedroom of the Bush units includes a balcony overlooking the reserve & waterholes. A large decked patio, off the living area and main bedroom, includes a plunge pool for cooling off during those hot summer days. These lodges are spaciously positioned and are built in such a way as to ensure your privacy especially when using the unique feature – an outside shower, privately hidden with rock-clad walls overlooking the waterholes….. what better way of waking up in Africa!

A Club House & Reception have been created as a communal area where owners are able to gather and share their experiences while the kids go and release all their pent up energy and play.

The Club House will have: