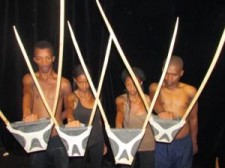 Fifteen productions on the main programme run from Monday to March 16, with a fringe programme of 13 productions on March 9 and 16 (Saturdays). More than 30 shows will show-case more than 200 artists from community and school theatre groups from the Western Cape, Durban and Gauteng.

Memory, Nhlanhla Mkhwanazi – Cape Town (English and Xhosa): Draws on masks and puppetry to retell an ancient fable about the relationship between man and elephant.

The Evil Snake, Mbekweni – Paarl (Xhosa and English): A well-mannered boy decides to defy his mother’s wishes and changes his life for ever as he learns the moral difference between right and wrong.

How Dare You?, Youth on Top – Khayelitsha (English and Xhosa): A 13-year-old can’t understand why her father takes out his frustration about his late wife on her.

A male nurse in a mental asylum has his own skeletons that fall out of the closet.
Barber-Man, Ubuhlanti – Khayelitsha,

(English and Xhosa): A barbershop owner and his friend show the world that we are all disabled in some way, physically or mentally.

Sister Earth, Jungle Theatre Company – Steenberg (English and Xhosa): A coming-of- age story of a rural teenager who moves to the city and must learn to navigate a different kind of space.

(English and Xhosa): A mother and daughter decide to stand their ground against an abusive father.

Ukuqhawuka Kweqhina, Imbawula Theatre Company – Khayelitsha (English and Xhosa): Written by Fleur du Cap (2011) nominee Khayalethu Anthony, this play about relationships points out that life is not a movie.

Disgraced comedienne Koekie might have taken a joke too far, while waitress Desiree faces a dilemma.

Duet in ‘n Malhuis, Joey Monroe Productions – George, (Afrikaans and English): Two patients are diagnosed with Walter Mitty syndrome – any word can send them off to a fantasy dream world that brings out their split personalities.

Tussen Grafte, Red Light 7 – Plettenberg Bay (Afrikaans): Two ghosts wander around their graves, reliving their final moments and how they came to be.

Dealing with issues of power, confusion, fear, hypocrisy and love, the play is about women who fear to move on after an abusive relationship.

T.O. and Ma 7, Bohemians – Soweto (English, Zulu and Tswana): A warning for teenagers about choosing your friends carefully, the play is about T.O., who was imprisoned for something he didn’t do.

Skierlik, Arch Entertainment – (English and South African vernacular): A young man travels home to Skierlik before it is demolished, to lay to rest the ghosts of his family, but first he needs to deal with why he left in the first place.

Anti-Christ, Emuhle All Artists – Durban (English and Zulu): The play asks why those who killed Jesus Christ are the ones who spread his word.

(English and Xhosa): Winner of last year’s Best of the Zabalaza Theatre Festival