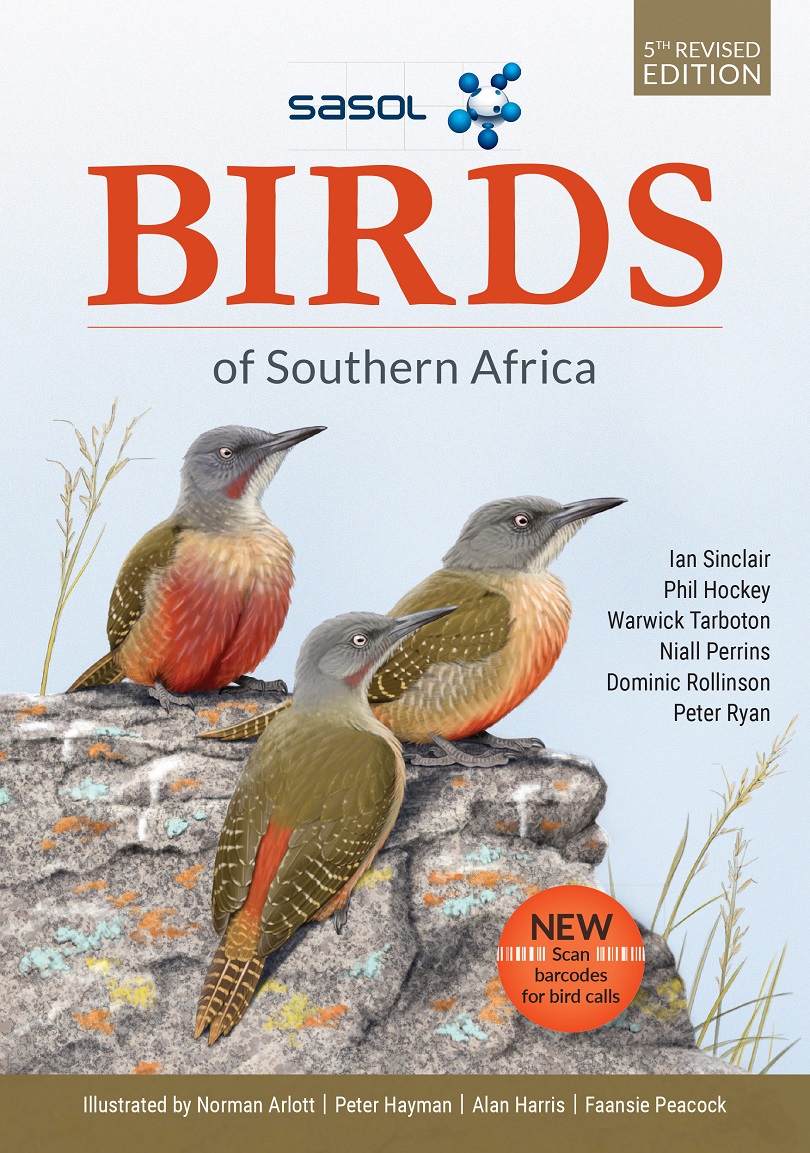 Twitcher , I think, is a derogatory name for a bird watcher. It detracts from the seriousness of the hobby or business, whether you enjoy watching your feathered friends twitter and frolic in the bird bath or feed on the abundant peach tree in the garden or studying the endangered Great Knot in its home territory, a rare vagrant from its breeding grounds in the east to the coastal estuaries of Mozambique; two have been sighted in Walvis Bay and three at Langebaan in the Western Cape which may be the same individuals, the authors note.

The fifth revised edition is just as informative as the other four with more information than ever, as is to be expected. The Southern Africa birding territory is defined as the area south between the Kunene, Okavango, Botswana, South Africa,  Zimbabwe, Eswatini, and southern and central Mozambique as well as the oceanic waters within 200 nautical miles of the coast. As a point of interest the 3.5 million square kilometres has a higher diversity of bird species,  more breed here than in the United States and Canada combined.  Not to forget your back garden: if it’s bird-friendly enough you may spot the rare straggler nesting in one of the trees on its way to warmer climes.

The region’s bird list stands at 989 species, of which 96 are endemic, occurring only in that region, and 78 are near endemic. The authors note that two bird families: the rockjumpers and sugarbirds are endemic to Southern Africa.  The authors explain without resorting to scientific jargon why the area is so attractive to bird life: the climate and topographical diversity, habitat-based distribution and a marine environment.

Over the past few years birding has grown as a hobby, thanks, the authors say, in no small part to the previous editions of Sasol Birds. As a result several new species have been added to the region’s bird list. These include the Short-tailed Shearwater; the Red-necked Buzzard; Upcher’s Warbler and the European pied flycatcher, to name some.

For all that, there is grave concern that increasing numbers of birds are threatened with extinction. In Southern Africa there are seven species that are critically endangered, 28 endangered, 32 vulnerable and 52 near threatened, and vultures are particularly at risk. Alien plants have also played their parts as have Mallards that have hybridised with other ducks. They include feral free-ranging populations, among them house crows; mynahs, and starlings pose significant threats to native birds.

Sasol Birds of Southern Africa is user-friendly and easy to navigate, unencumbered by jargon except for the Latin names. But they sound more exotic in English. Not so exotic sounding is the Hadeda (Bostrychia Hagedash). It sounds nicer in Latin:  it is a noisy bird and a familiar sight in Cape gardens and its raucous squawks put the fear of God into any pet snoozing in the sun. Some other unusual names are the Whimbrel, once thought to be extinct but a few have been seen at Richards Bay in KwaZulu-Natal; the Asian Dowitcher, near-threatened but one has been recorded in Guateng; and the Knysna Warbler whose voice is an accelerating series of sharp whistles, ending in a dry trill, and its status is listed as vulnerable.

Sasol Birds is profusely illustrated with detailed full colour images with maps showing the areas where each species can be found and a short but comprehensive description of each bird. How apt that one of the artists has the surname Peacock. There is a comprehensive index of scientific, Afrikaans, common names, and an alphabetical quick reference to bird groups. The authors are all experts in the field of birding. A companion to Sasol Birds is a 36-page booklet,  a handy way of ticking off the birds on your bucket list . The app, Sasol eBirds Southern Africa is available for download at  Apple IOS or Android at R379.99.

Sasol Birds of Southern Africa will help you to look at birds and birding in a whole new light. Don’t leave home without it.

*If you buy a copy of the fifth edition of Sasol Birds of Southern Africa you will get 15% off the current membership fees of BirdLife South Africa and it includes six issues of South African Birdlife Magazine, annual membership card and supporter’s sticker, a regular e-newsletter and two free bird call ringtones for your cellphone. Email: membership@birdlife.org.za for more information.