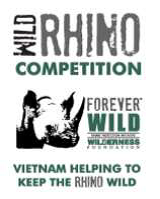 The Wilderness Foundation, in partnership with Investec Rhino Lifeline and the Peace Parks Foundation, has launched a competition in Vietnam as part of their Forever Wild Rhino Protection Initiative.

The challenges facing South Africa with regard to rhino poaching are well-documented with more than 1,000 rhino having been poached in 2014 alone. The South African government, parastatals and non-government organisations are working on a number of fronts in an attempt to curb this critical situation. While much attention is given to strengthening the protection of rhino, in situ attempts at demand reduction in user countries have been relatively limited.

In April 2014 the Wilderness Foundation, with partners Shamwari Group, Investec Rhino Lifeline and Mantis Collection, hosted Vietnamese pop stars Thu Minh and Thanh Bui in South Africa to give them an authentic wildlife experience with rhino. The purpose of the visit was to educate them on the rhino poaching crisis, and to introduce them to the teams and people involved in combating rhino poaching every day.

Subsequently these two prominent ambassadors have teamed up with the Wilderness Foundation to launch the Wild Rhino Competition to Vietnamese youth at 12 private schools in Ho Chi Minh City. This intervention will result in 24 Vietnamese school-going students from the upper echelons of Vietnamese society being immersed in rhino related matters, allowing them to return home as dedicated and informed ambassadors for the cause.

The 24 winners will be brought to South Africa to attend a five-day traditional wilderness trail, facilitated by the Wilderness Leadership School in the iMfolozi Game Reserve in KwaZulu-Natal. They will also be taken to the bomas in the reserve to spend time with the rhino calves orphaned as a result of poaching. Further activity includes attending workshops where they will be exposed to the challenges facing conservation efforts generally, as well as the full reality and implications of rhino poaching and wildlife crime. Youth from communities surrounding iMfolozi will participate in the workshops to encourage interaction and dialogue with the Vietnamese students.

“As the poaching threat increases, anti-poaching efforts must be broadened and accelerated. If poaching continues to escalate at its current rate, rhinos could become extinct in the wild in less than a decade. There are thousands of dedicated, passionate rangers in South Africa and other rhino range states, standing between the rhinos and the poachers – but they need our help. We believe that the Wild Rhino Competition, which forms the pilot of our planned broader Demand Reduction Campaign, will take us a step further to reducing the demand for rhino horn in a user country,” says Andrew Muir, CEO of the Wilderness Foundation.

Through its Rhino Protection Programme, the Peace Parks Foundation has made a significant financial contribution to make the launch and roll-out of the competition possible Says Werner Myburgh, CEO of Peace Parks Foundation: “The education of youth in countries that trade and use rhino horn is an essential component of a global demand reduction strategy, and this project is a natural fit for the Rhino Protection Programme. By positively shaping the youth’s perceptions about the realities of rhino poaching, and instilling a deeply-ingrained respect for wildlife, they in turn can play an influential role to educate their peers and communities. We are very proud to be associated with a project that has such a collaborative nature – more collaborations like these can make a real difference in the fight against rhino poaching. It is our hope that the youth can become the reasoning voice that it is simply socially unacceptable – or better put, not cool – to use rhino horn as a status symbol, to the detriment and ultimate demise of this iconic species.

The Rhino Protection Programme (RPP) is implemented under the auspices of the South African Department of Environmental Affairs in partnership with South African National Parks, Ezemvelo KZN Wildlife and Peace Parks Foundation that focuses on combatting wildlife crime. Earlier this year the RPP received funding from the Dutch and Swedish Postcode Lotteries which has made the roll-out of this mutli-faceted programme possible. The funds allocated to launch and run the Wild Rhino Competition is a direct result of the Dutch and Swedish Postcode Lotteries’ support.

The Wilderness Foundation’s Forever Wild Conservation Programme was developed in 2011 as a response to the rhino poaching crisis and has been active through the Rhino Protection Initiative. In 2013 the Programme was expanded to include lion, leopard, elephant, gorilla and great white shark conservation initiatives as they represent key species symptomatic of the challenges facing the environments in which they live.

The initiative primarily provides logistical and operational support for conservation and law enforcement agencies responsible for rhino security. It is also involved in raising public awareness of the rhino poaching crisis (such as information boards, displays, leaflets, radio and media campaigns) and manages a Rhino Antipoaching tip off line. Other activities include the coordination of anti-poaching training, aerial assistance, vehicle support, intelligence gathering and specialist support, as well as a Rhino survivor fund, Eastern Cape Rhino DNA and tracking device project and a rhino survivor research project in the Kruger National Park.

ABOUT THE WILDERNESS FOUNDATION

The Foundation was established in 1972 by conservation pioneer Dr Ian Player, who led the team that saved the white rhino from extinction in the 1960’s, an action-legacy that the Wilderness Foundation continues today, working against wildlife crime and combating the rhino poaching crisis.

The Wilderness Foundation focuses on four main programme areas: Wildlife and Wilderness Conservation, Social Intervention, Leadership & Education, and Advocacy & Awareness. The Wilderness Foundation is also an active partner in the globally-focused “Wilderness Network,” a close-knit and talented group based on the values of: a passion for direct conservation action; respect for all living things; a deep commitment to conservation education; and with operations that demonstrate integrity, transparency, sustainability, and innovation.

Peace Parks Foundation was founded by Nelson Mandela, Dr Anton Rupert and Prince Bernard of the Netherlands in 1997 to facilitate the establishment of transfrontier conservation areas (TFCAs) in southern Africa.

The Foundation presently works on 10 TFCAs spanning the borders of 10 southern African countries.

The Foundation has a number of focus areas, including the development of the region’s TFCAs, community development projects in and around those areas, training wildlife managers at the Southern African Wildlife College, training in hospitality and in tracking skills at the SA College for Tourism, facilitating research and experimental work on animal diseases at the Hans Hoheisen Wildlife Research Station and combatting wildlife crime, with a first focus on rhino protection.

The Foundation’s Rhino Protection Programme falls within the division that focuses on combatting wildlife crime. Wildlife Crime is the fourth largest illegal activity in the world after drug trafficking, counterfeiting and human trafficking with an annual turnover of at least 19 Billion US dollars. It is decimating Africa’s iconic species of elephant, rhino, lion and leopard and threatening the very existence of Africa’s protected areas where tourism is a major GDP contributor.

South Africa loses rhinos on a daily basis. The rhino crisis has become the most significant conservation issue faced by the country.

In 2012, Investec responded to the plight of rhino poaching in South Africa by developing Investec Rhino Lifeline which aims to raise awareness of the rhino crisis and to respond through education as well as rescue and prevention initiatives. Investec Rhino Lifeline is a partnership with Dr Will Fowlds, a deeply passionate wildlife vet who has been exposed to the rhino crisis through his professional contact with rhino conservation projects and his first-hand experience in dealing with poached rhinos.

In 2013, Investec Rhino Lifeline deepened its commitment to education by partnering with Coaching for Conservation, led by a passionate conservationist Lesley McNutt, to raise awareness of the rhino crisis and involve children in creating conservation solutions through its unique education model.

At the beginning of 2014, Investec established a partnership with Wilderness Foundation to develop funding opportunities that will ensure the sustainability of these and other conservation activities underway.

Furthermore, Investec is supporting Wilderness Foundation in their Demand Reduction Strategy which was developed in order to assist in addressing the rhino poaching crisis by reducing demand for rhino horn in user countries.

As with all its partnerships, Investec strives to identify and collaborate with like-minded associations in order to achieve mutual objectives. www.investec.co.za/about-investec/sustainability/planet/investec-rhino-lifeline.