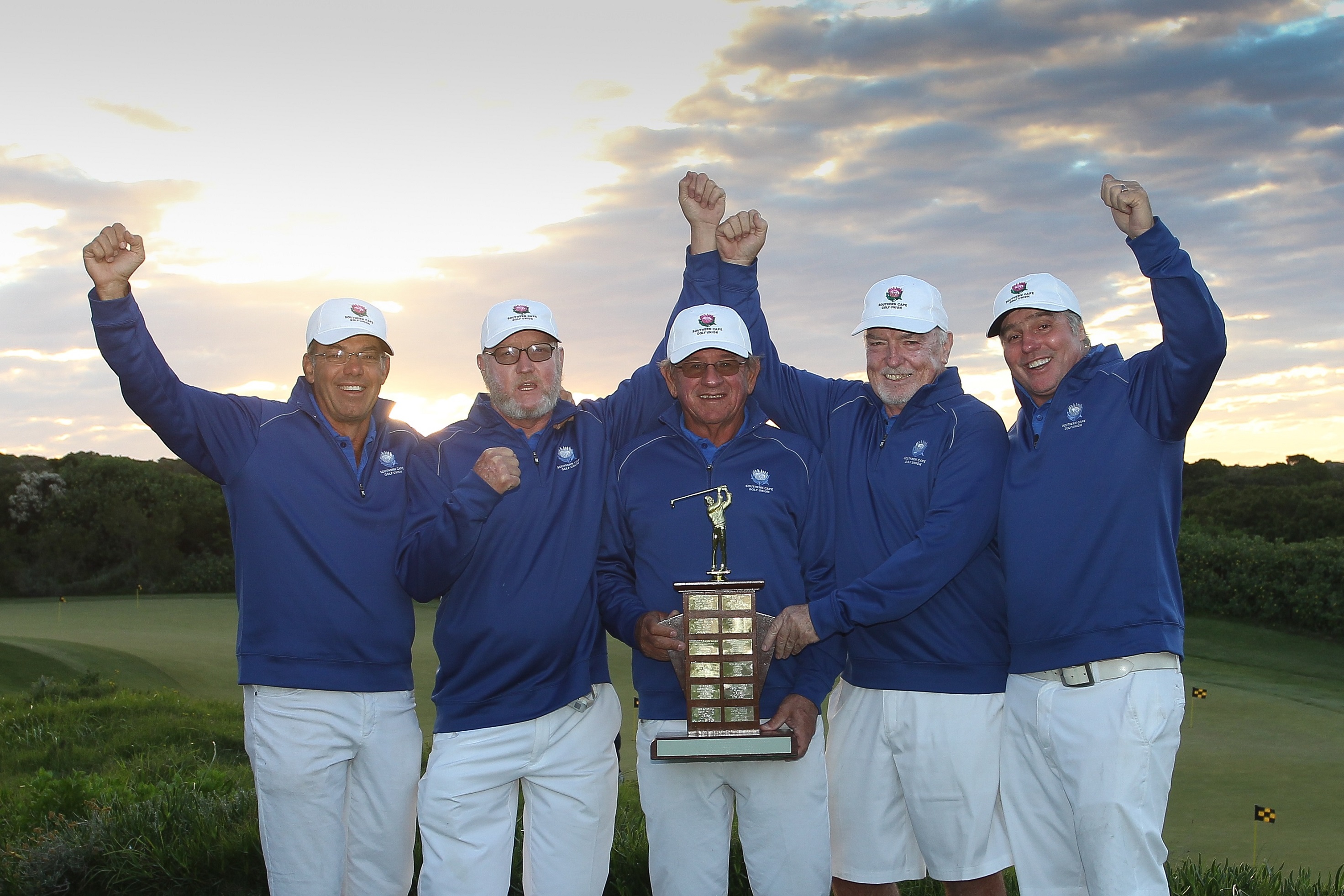 ST FRANCIS LINKS, 26 April 2018 – The Lions powered their way to the top step of the winner’s podium in the Senior division of the SA Senior A Inter-Provincial for a third successive time, while Southern Cape claimed the Super Senior prize at St Francis Links on Friday.

Central Gauteng closed out their hat-trick of title with two convincing conquests in the final round. The Lions ran rampant over Ekurhuleni, winning the Foursomes 4 – 0 and racking up five more points in the Singles to triumph 9 – 3.

Although the clash with former powerhouse Western Province proved slightly tougher, the side capitalised on a 3.5 – 0.5 lead in the morning session to drive home a 7.5 – 4.5 victory in the Singles.

“The Foursomes were key for us,” said manager Jaco du Plessis. “Starting with a lead means nothing in this format and we decided at our last team meeting to take nothing for granted. We were going hard from the get go and that meant a strong Foursomes result.”

Steve Williams and Stephen Johnston covered the tail-end with a point a piece.

“Going into the Singles on the front foot took pressure off the guys in the Singles, but that said, this is a team where everyone plays for every point,” said Du Plessis.

“There are a lot of strong players on the team. Steve is number one in the country; Jock was out there playing in his 18th SA Senior IPT; Stephen, Schalk and Greg are very experienced. Rurik, in his second senior IPT and Craig in his debut topped the Most Valuable Players list this week. I could put these eight players anywhere in the batting order and they would still play to win.”

Gleeson got his revenge on Koopman when he beat the Western Province player 5 & 4 and Gobel took the side to 5.5 points when he defeated Poulton 3 & 2. However, Province gained some traction with victories from Julian Visser, Ralph Richardson and Brian Mampies.

Camps added a valuable point when he eliminated Henry Trevena 1-up and halves from Bruyns and Williams sealed their hat-trick.

“I’m absolutely ecstatic and I know every guy on the team shares in this celebration,” said Du Plessis.

“Andy Truluck, my assistant manager and I have worked incredibly hard over the last five years to foster a one-for-all philosophy in our IPT teams. And this team personifies that culture. You could see that commitment, determination, focus and drive in all their matches.

“We came into the week with a big target on our backs, but we never lost a match. I think that speaks volumes about the spirit and character of this team, who really deserve this victory.”

Central Gauteng closed out the tournament with 10 points and 43 games points, while Western Province took second on nine points and 33.5 games points after beating Ekurhuleni 8.5-3.5.

North West and Ekurhuleni both accumulated just two points in the tournament, but North West left Ekurhuleni holding the wooden spoon when they won in games points – 24 to 15.5.

Southern Cape also ended the week on a high note after beating Gauteng North 4 – 2 and handing Ekurhuleni a 5 – 1 drubbing in the final round.

Neil Abrahamse and Solly Rautenbach lost both their Foursomes but Abrahamse carved out a narrow 1-up victory over Vaughan Sammons from Ekurhuleni for a valuable point. Rautenbach mowed down Ekurhuleni’s William Berry 8 & 7 and routed Rinus van Niekerk from Gauteng North 2 & 1.

Johnny Millar and Bertus Smit won 5 & 3 against Berry and David de Noroonha from Ekurhuleni and they downed Gauteng North pair Adrian Kriel and Etienne Groenewald 2 & 1. Millar beat Kriel 3 & 2 and defeated Michael Lekhuleni 1-up, while Smit drove the final nails in their opponents’ coffins when he knocked out Groenewald and De Noroonha 5 & 4.

Southern Cape topped the log with nine points, Gauteng North was second with eight and Central Gauteng third with seven points. KwaZulu-Natal accumulated three points to take fourth, Western Province was fifth with two points and, like their team-mates in the Senior Division, Ekurhuleni finished at the bottom of the barrel with one point.

SENIORS A DIVISION RESULTS – Final Round

SUPER SENIORS A DIVISION – Final Round