Garden Route Film Office has undergone some major changes recently and we are encouraged by the progress made in developing the environment required to facilitate Film production in the Garden Route Region.

Capture of Information: Given the above spend as a statistic it becomes evident that we capture this information and create a database of local suppliers.

–          Producers need to know services and supply chains available in the region or they bring it into the region resulting in a loss of local spend for that item, for example Generators, Toilet, Vehicle hire etc.

–          The statistical information is what will drive local, provincial and national entities to identify there is potential in a region and invest in people, businesses and infrastructure.

–          We are aware of a number of productions that have filmed and are planning to film in the region but without a centralized, informative place for these productions to enquire, essentially we can’t report on the impact.

WHERE CAN YOU BENEFIT AS A MEMBER?

–          Complete your profile with picture and description.

We market our page and social media to a worldwide database and have supportive marketing from provincial bodies. Your company, you as an individual or supplier can benefit indirectly through our online search engine.

Film Production uses a multitude of suppliers depending on if it is a documentary, feature film, TV series, Reality series or commercial: Examples include: 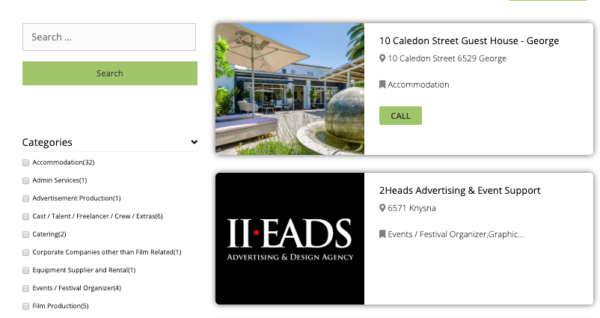 Upon conclusion of the AGM the new board was adopted. A larger board was created to enable the GFO to roll out its planned initiatives more efficiently and effectively. The following changes were made and positions created as portfolios:

WHAT HAVE WE BEEN UP TO? 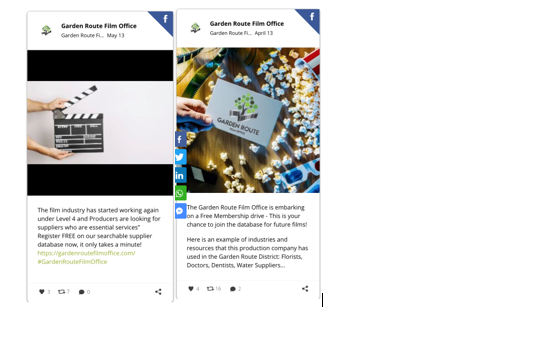 Two competitions to drive potential members to the website and increase our media library of locations. Visit our Facebook page for details. 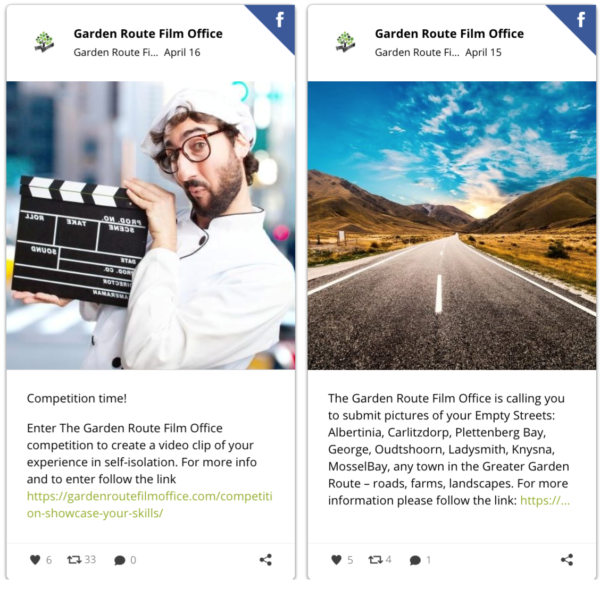 The Garden Route Film Office will be doing a short tour of the region to raise awareness around the training and development opportunities in the area. Targeting unemployed youth and skilled practitioners the sessions will be practical and informative leaving participants with skills and knowledge and some direction to further their careers in the film industry. The tour will take place in August and will pass through towns – Riversdale, Ladismith, Calitzdorp, Oudtshoorn, George, Mossel bay, Plettenberg Bay and Knysna.

The Garden Route Film office will be visiting your town soon (towards the end of July).

We are excited to present a non-accredited, informative, interactive,  two day workshop to you in order to equip you with knowledge and skills of the industry, in particular, Finances, Writing for the film industry and Editing skills.  If you have a keen interest in filming, have had no film training before, have a tablet or smart phone, please send us a short bio of yourself, supplying your personal and contact details; why you are interested in this workshop; and a short paragraph of ” Our town as a gem”.  Five candidates per town will be attending.  Please forward the above information to Letitia Cunningham ; email address – tishacunn@gmail.com.  Please note that short, individual videos will be submitted to virtual reality, but it remains the intellectual property of the candidate.

See you there!  THE WORLD IN ONE DESTINATION.

Feature Films and Production in the Region

There were features films in the region, including Skemerson; 8; Toorbos. And in the past Thys en Trix, and major international series The Crown and Black Sails. BBC continues to film in Mosselbay. The GFO continues to assist with enquiries for small productions and permitting. A number of scouts were in the region for other shows.

The GFO is aggressively working on creating permitting and locations through the GFO to enable us to gather important statistics, ease the burden of those having to enquire to multiple municipalities and open up the locations market to include the private sector. We will report back on this in our next Newsletter.

Garden Route International Film Festival GRIFF due to Covid19 has changed to a physical festival to an online Virtual Festival and Drive-in Cinemas. This also had a positive change which has given the GFO an opportunity to expand its efforts and exposure across the whole region:

The Drive-in Cinemas have received great publicity and the GFO is a key partner as its flagship annual event. 9 towns around the region have been identified,  with plans to expand to others with increased funding in the future: Mosselbay, George, Knysna, Plettenberg Bay, Oudtshoorn, Calitzdorp, Ladismith, Sedgefield and Riversdale.

The  GFO will embark on a roadshow to Mosselbay, George, Knysna, Plettenberg Bay, Oudtshoorn, Calitzdorp, Ladismith and Riversdale as a start of a cycle of roadshows ultimately visiting all the towns in the region by end of the 2021 funding cycle. Supplies, Stakeholders and Learners will be involved.

Key focus will be to

The increased activity on the website has led to positive interaction with members who are sending in information for us to share on our platforms. In addition the new media company is consistent with its sourcing and posting of industry related news.

Please visit our site for News, Courses, Funding and other industry related news.

Audit of jobs or positions in businesses relating to film / TV digital media and marketing in the Garden Route.

BUDGET AND PROCEDURES FOR SPENDING & OVERSIGHT

A finance committee with municipal oversight has been established with new conditions for spend. Standard accounting practices, procedures for reporting have been implemented with more involvement and decision making from the board.

The GFO has undergone major changes since the AGM in November 2019 with progress on a number of fronts being made. Covid19 has prevented the rollout of programs aimed for March – August and therefore we have used the lockdown for planning our initiatives to hit the ground running once the restrictions ease sufficiently to roll out our physical plans.

The Garden Route Film Office Board