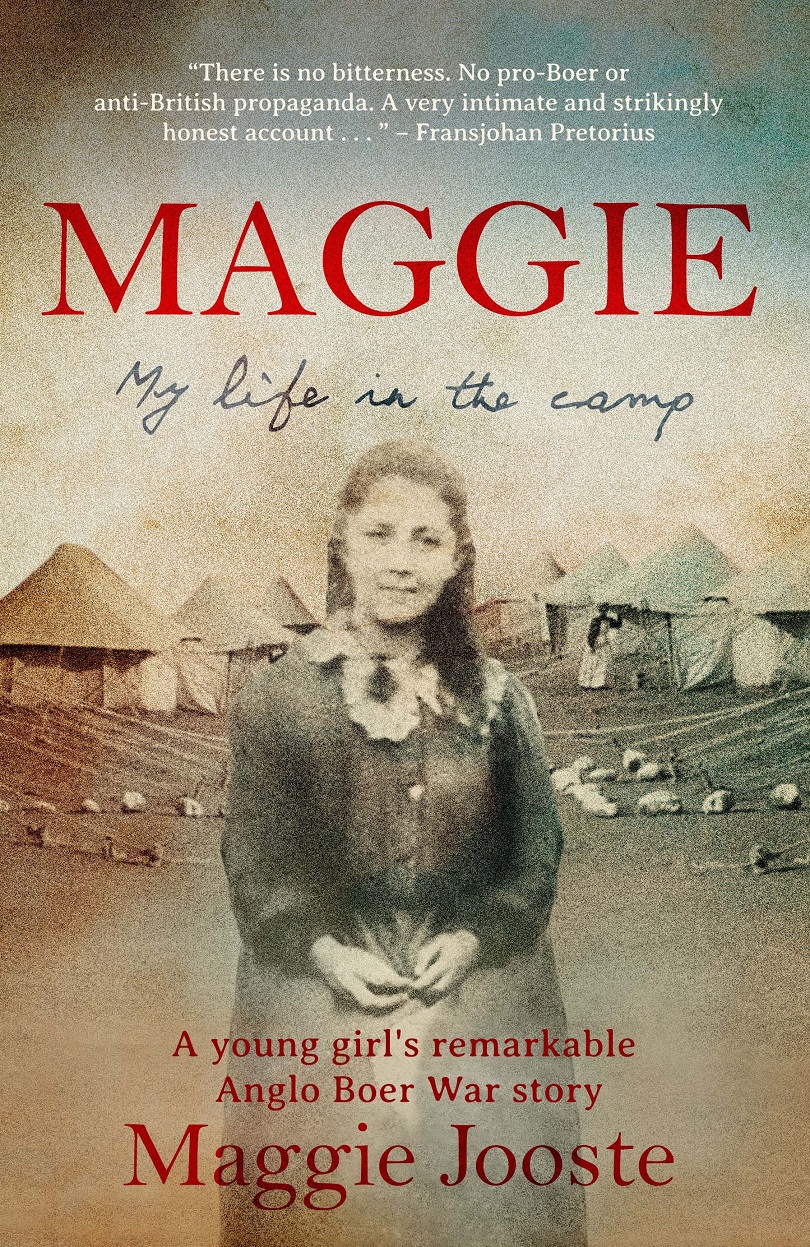 My Life in the Camp

You would think that an account of being interned in a concentration for three years during the Anglo-Boer War would be full of hate for the enemy, the

British. Instead, in Maggie Jooste’s narrative that loathing is reserved for the hensoppers and the Afrikaners who stayed home and refused to fight in the trenches.

Maggie Jooste was just 13 when the Anglo-Boer War broke out. She had her story typed up in 1962, originally in Afrikaans, when she was 76 years old and then translated it in to English. Professor Emeritus and historian FransJohan Pretorius of the University of Pretoria, writes that Margaretha (Maggie) could write very well. One of her censored letters written at 14 to her former teacher appears in Emily Hobhouse’s book The Brunt of the War And Where It Fell. Maggie also submitted the prize-winning entry for David Graaff’s essay competition, an account in English of camp life, ink smudges and all, while she was interned there.

Maggie grew up in Heidelberg in the then Transvaal and her recollection of those early days is startling. She remembers that at the first house they lived in there was a room to the left of the back door where she remembers seeing a machine, apparently used to make lemonade. When the bottle was put under the tap, a round green marble popped up from the neck of the bottle to seal the contents. Years later her mother was astonished when she reminded her of it as she couldn’t have been more than two years old at the time.

Later they moved to a big, new white house opposite the home of Englishman Jimmy Russell who later proved to be a Good Samaritan. Maggie came from a relatively well-off family. Her father, who was later sent to Bermuda as a Prisoner of War, had a flourishing wagon-making business and the family, which consisted of 12 children, wanted for nothing. Mother had a white girl to help with the household chores.

This “idyllic” life came to a shattering end when the Anglo-Boer War broke out on October 11 1899 all the Burgers of the Transvaal were called up and as  Heidelberg was on the main railway route to Natal, the Commando was one of the first to leave to stop the enemy from invading the country. What everyone thought would be a short-lived war lasted nearly three years.

“Then”, writes Maggie, “the dreadful day, June 23 1900, dawned for us”. Until then they were living in the big house for nine months without any form of income and everyone did their best to help Mother. On that day Lord Methuen arrived in Nigel with a force of  10 000 men and “we heard the cannons firing near the town”. Methuen threatened to bomb Heidelberg “if we did not surrender” so Maggie, her mother and some of her brothets and sisters accompanied Father and Cornelis some way out of town (Cornelis was attached to President Kruger’s office, working as a telegraphist. Later he accompanied Kruger to Machadodorp (Mpumalanga) and when the president left for Europe Cornelis and some other soldiers were guven large sums of money to pay the wages.

Trudging dejectedly with Father and Cornelis they saw a stream of Khakis (English soldiers) going to the house of the magistrate, Mr FD Wepenaar, who along with other burgers had chosen to betray their country rather than to resist and lay down their arms. This is one of the few instances that Maggie allows her bitterness to overwhelm her.

During the six months until December 1900 all the women whose husbands were on Commando were under house arrest and the food was running out fast. The English confiscated all the livestock and poultry but Mother managed to hide their cow in a copse of Poplar so at least the children could enjoy a glass of milk now and again.

Then came the day the women were herded in to cattle trucks and freighted to the concentration camps in Natal. If the journey was a nightmare the camps were something out of a Stephen King horror story. But worse because it’s not a work of fiction.

Maggie recalls many incidents of soldiers trying to assault the girls, although they sometimes showed a spark of human kindness by occasionally giving them a tin of condensed milk.

The winter of 1901 was indeed bitter. Everyone in camp was ill with whooping cough, measles, chickenpox, scarlet fever and diarrhoea, to name some. The only doctor in the camp was a  veterinary surgeon. Eventually Mother and Maggie developed severe ulcers on their legs and were sent to the isolation camp. From there Mother was taken to hospital in Pietermaritzburg where the only solution it seemed was amputation. But thanks to a kindly French doctor, Dr Alma Dumas,  and Maggie’s pleas, the leg was medically treated and saved but for years the scars remained. Maggie’s leg sores were also treated and soon got better.

Fast forward to Sunday June 1 1900 when everyone was in church and Maggie recalls that when they looked out the window they saw a soldier carrying a big white banner on a pole. On it was written Peace. Vrede.

Well, peace and vrede may have broken out but it wasn’t the end of the line for Maggie. You will have to read My Life in the Camp to find out what happened next. It is a remarkable story told through the eyes of a young girl about the trials and tribulations of life in a concentration camp, a British creation. It’s a valuable addition to the annals of South Africa’s tortured past that many prefer to airbrush out of history. Black and white historic images add interest.